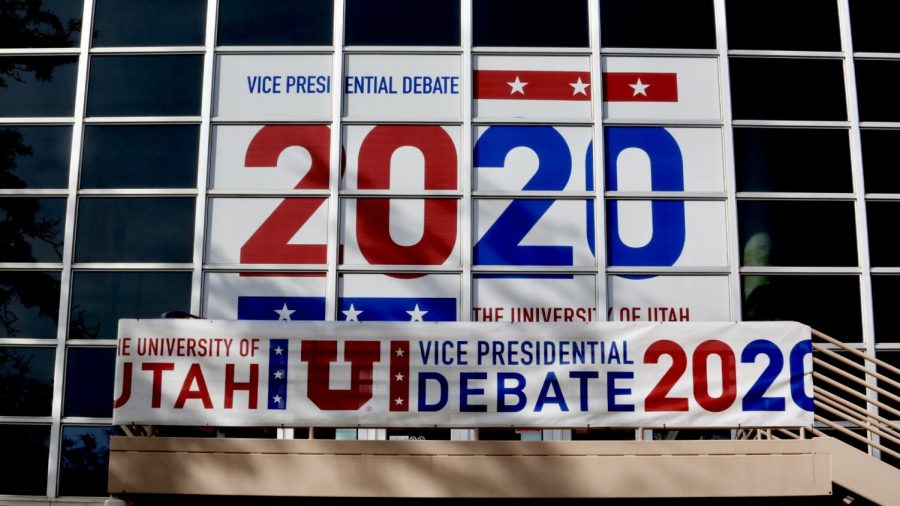 Advertisement for the 2020 Vice Presidential Debate on the Student Union at the University of Utah campus in Salt Lake City on September 28th 2020. (Photo by Camille Rousculp | The Daily Utah Chronicle)

For those who haven’t heard, the vice presidential debate will be held at Kingsbury Hall today, Oct. 7. Students at the U and Utahns alike have a chance to be more civically involved in this election. Often, the vice presidency isn’t seen as important as other national leaders, but the VP debate gives us a chance to evaluate each candidate’s running mates and examine what they bring to the tickets. Mike Pence and Kamala Harris could be the ones to tip the scales for undecided voters who don’t know where to cast their ballot. I’ll be paying close attention to both to see if my vote is safe with Biden and Harris. But I also want to keep an open mind and consider other aspects of the vice presidency while examining these candidates.

I never thought to pay close attention to the VP candidates. But the more I dig into the history of the VP and the immense impact they can have in the White House, the more concerned I am about who will hold that position. Beyond replacing the president in the event of their passing, impeachment or resignation, they also preside over the Senate as president to break tied votes. And they often lead many national programs, such as It’s On Us and the CARES act.

In times of crisis, they can be tasked with managing crisis responses. Mike Pence, for instance, took charge of the US’s response to COVID-19 with little success. He recruited people who knew very little about public health to the task force — showing us he cares more about being Trump’s yes-man than properly addressing COVID-19. During the Obama administration, then-VP Biden handled the outbreaks of H1N1 and the Ebola virus. Despite difficulties, he stayed involved, sought swift action and did a generally decent job taking the outbreaks seriously.

The type of VP that a president chooses does influence the public perception of the president. The VP exemplifies the types of people that the president trusts and interacts with. When people see a running mate that has their own leg to stand on, it’s easier to place faith in the potential administration.

So, for the voters who want to know more about the VP candidates, here are some key things to look for during today’s debate. The VP candidate should firstly complement the character of the presidential candidate well enough to be able to work through national issues. They cannot hide behind their candidates’ notoriety and should stand firm in their own opinions. I should be able to trust the Vice President to be President of the United States. It sounds strange, but again, these transfers of power have occurred before. And, because of COVID-19, this possible situation isn’t out of the picture. After Trump tested positive for COVID-19, the possible transfer of power to Pence has caused uncertainty in the White House and across the country. In situations like this, we need to be confident in our leadership, which makes it all the more important that we have full confidence in VP candidates before we cast our votes.

From my perspective, Pence does his best but doesn’t seem to have the independence to properly run the nation — especially given his vice presidency thus far. He’s tried to enact multiple bills that limit access to birth control, such as casting the tiebreaker vote to defund Planned Parenthood. And while he’s attempted to maintain order throughout the COVID-19 pandemic, he doesn’t have much experience in public health. Harris, on the other hand, seems capable and independent enough to keep the country together. I can’t testify to her actual abilities to handle the public health crisis, but considering the steps she’s taken to help marginalized communities severely affected by the virus, she is positioned to better fulfill the responsibilities of VP.

As stated in my previous article, we can’t hate on Pence because he’s associated with Trump, nor can we praise Harris simply because she’s associated with Biden. Today I want to focus on Harris’ positions on COVID-19, healthcare and immigration. Chances are this public health crisis is far from over, so should Biden win the 2020 election, I want to know how she would handle the pandemic. In relation to that, seeing how Pence responds to those issues is crucial as well. I’d hope that Harris won’t resort to beating him down with questions, but that the two can engage in conversations that add to their respective campaigns rather than subtract.

At the very least, I hope that Harris and Pence can actually inform and educate me and other voters, unlike the first presidential debate. This VP debate should be on the radars of every voter, but especially fellow undecided voters — no matter who you’re leaning towards or your typical level of political involvement. Debates can give us a great amount of insight into the future of this country and help us become more confident in the entire ticket, not just the presidential candidate we vote for.