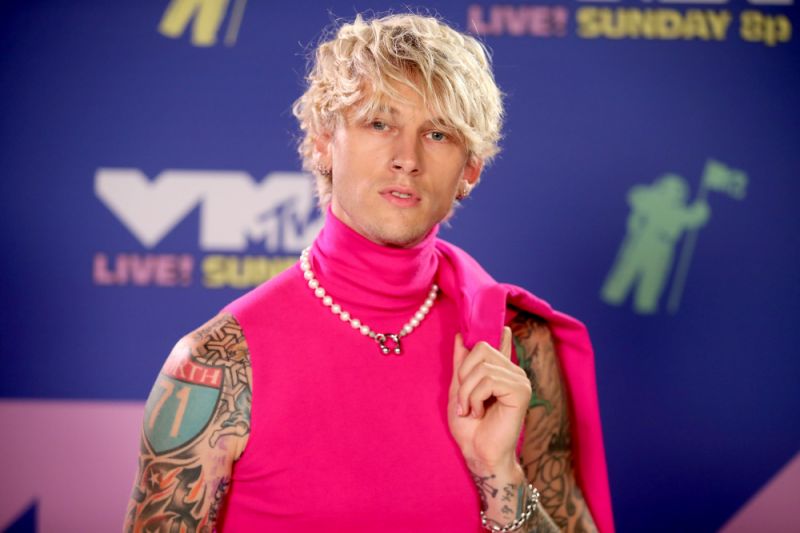 Machine Gun Kelly’s fifth studio album “Tickets to My Downfall” is your ticket back to 2005.
Genre Hopping
Colson Baker – whose stage name Machine Gun Kelly has become more real to him than his birth name — dropped his newest album, “Tickets to My Downfall” on Sept. 25, 2020. The project was labeled a departure from his regular genre. While he’s comfortably occupied the rap genre since the beginnings of his label-sponsored career, he’s flirted with rock, metal, hip hop and punk for just as long.

Still, it was unusual to see an MGK album with a consistent narrative. On previous projects, listeners got what I lovingly refer to as “song soup,” bouncing from features with R&B and emo-reminiscent artists to Eminem-esque tracks and Waka Flocka Flame verses. “Bloom,” his 2017 indie-pop album, boasted songs produced by Jesse Shatkin — famous for his work with Selena Gomez and Ellie Goulding — but still let tracks like “Trap Paris” and “Wake + Bake” pull the album in different and confusing artistic directions.

His fourth album, “Hotel Diablo,” was cut from the same cloth as his previous three projects, packaging disconnected songs under a giant “rap” umbrella, and seeing only small bursts of success. However, it featured the most prominent nod yet to the pop-punk album to come, with the first features of Yungblud and, most importantly, Travis Barker of blink-182.

Barker went from sitting on the bench to a full-blown partner on “TTMD,” and his influence, along with that of Pete Wentz and Patrick Stump from Fall Out Boy, is obvious in everything from the length of each track to the slurred, raspy vocals and incredibly clean drum solos. Turns out MGK had a number one album in him all along — he just needed a few pop-punk icons to lead the way.
Tracks
The album opener, “title track,” lulls the listener into a false sense of tranquility with a stripped-down, soft guitar. Within 40 seconds, MGK’s “Ay, f—-k it!” launches the song, and the rest of the album, to new pop-punk heights.

True to MGK’s MO, the album’s lyrics often center around drug use and abuse, with the recording sessions seeming to be powered by much of the same. The track “drunk face” uses the new pop-punk base to reference older MGK projects of the same topic – “I’m a Hollywood Whore / I don’t ask names,” while detailing his battle for sobriety.

The narratives are more honest — and less cliche — than anything I’ve ever heard from MGK before. Poignant interludes in the form of conversations with friend Pete Davidson and current girlfriend — and assumed bloody valentine — Megan Fox are sandwiched between songs, showcasing MGK’s dysphoria brought about by addiction, abandonment and abuse.

He claws through the pain and confusion of the loss of his father on “lonely,” and wonders out loud about how his daughter may deal with his own death on “play this when I’m gone.” Both are headbanging heartbreakers.

While there is plenty of reminiscing on “TTMD,” it’s the stark contrast in attitudes and delivery that really make the album. Though many of the features were unexpected — Halsey made her first appearance on an MGK track, along with Iann Dior and the Utah-based pop-punk, rock band The Used — it was the romantic lyricism that I found most surprising. Lyrics like “Even if I got a wife / she’s just somebody I f—-k” from “Hotel Diablo” held up against “I can’t hide / how I feel about you inside / I’d give everything up tonight / if I could just have you, be mine” on “bloody valentine,” seem to not only be a shock to me but to MGK himself.

Soon after the album release, Travis Barker posed this question:

And I’ve thought a lot about my answer. Each time a song starts, I say “Okay, this one. This is my favorite,” a thought that lasts only until the next song starts.

Throughout the project, MGK acknowledges his shortcomings and plans his titular downfall, while simultaneously making the most coherent, compelling and consistent record of his career. Old MGK fans will recognize his demeanor in every song, and praise his growth, while new fans will be quick to sift through the rest of his discography.
Verdict
If you shuffled the album and kept your eyes closed, you’d hear the gruff, pained vocals on “can’t look back,” the drums on “WWIII” and the harmonies on “all I know” and assume Good Charlotte, Fall Out Boy, Linkin Park and blink-182 did some sort of miracle collab. MGK has finally found his voice, and I’ve bought lifetime tickets.