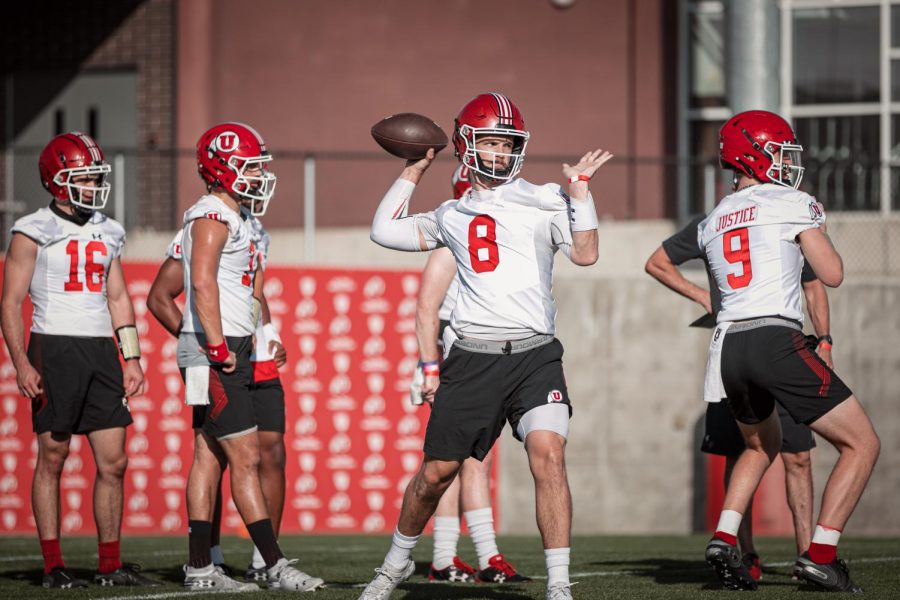 The pads are out for Utah football this week. The team is heading into their first full week of an abbreviated version of Camp Kyle and while the coaching staff is already seeing good things from this 2020 team, more questions will be answered as the pads come on this week.

“Had a good first two days, Friday and Saturday — a lot of positives, but no pads so we take that with a grain of salt,” head coach Kyle Whittingham said. “We put the pads on today and really for the rest of the week. We are looking forward to a big scrimmage Saturday which will be the first live-work — extensive live work any of our guys have had for a year, I guess you could say — or almost a year. So we are going to start finding out who we really have and you don’t really do that till you get the pads on. Today will be the first day we start making some evaluations. We are looking forward to that.”

One other battle that fans are looking forward to this fall is the quarterback battle that is currently going on. Cam Rising, Jake Bentley and Drew Lisk are all duking it out for the starting job. While all three have had very different paths to the U, all are competing for the job.

Bentley, who is a graduate transfer from South Carolina, is the only player out of the three to see major playing time at the collegiate level. While playing in the SEC is vastly different than the Pac-12, he feels ready to transition into the Conference of Champions.

“I think the SEC has really prepared me to get through any situation,” Bentley said. “This is a totally different offense for me. A lot of people run the same concepts, but this offense is complex. It takes a lot of learning, a lot of film work, and that’s what I’ve been having to do. I think on-the-field experience in the SEC has helped a lot, but as far as learning the offense, it’s something I’ve really had to rely on Coach [Ludwig], and Drew and Cam to soak up their knowledge as well.”

Rising, on the other hand, was on the team last season but was ineligible to play after transferring to Utah from Texas. He spent a good chunk of last season in the press box with Ludwig, but in practices, he played the ever-important role of scout team quarterback.

“The time I spent up in that press box was very valuable,” Rising said. “I got to see a whole different side of football that I’ve never really been able to see, and hopefully I’m able to think how Coach ‘Lud’ thinks and keep moving forward.”

The third player who will be vying for the starting job is Drew Lisk, who will be a redshirt senior this season. There was no guarantee he would be coming back this season since he received his degree in May. But he decided to take the fifth year that was offered to him, not letting the opportunity pass.

No matter who will be taking snaps under center this year, Whittingham knows the offense will be in good hands.

“As far as their knowledge of the playbook and grasp of the scheme, it’s exceptional,” Whittingham said. “All three of them are studiers, all three of them had good moments on Friday and Saturday, it’s going to be a tough decision because all three are doing good things for us so far.”

Whittingham and his staff hope to have the three quarterback race narrowed down to two after this Saturday’s scrimmage and will be able to name a starting quarterback shortly after that.