Nelson: Presidential Candidates Should Target Their Audience in the Debates, Not Each Other 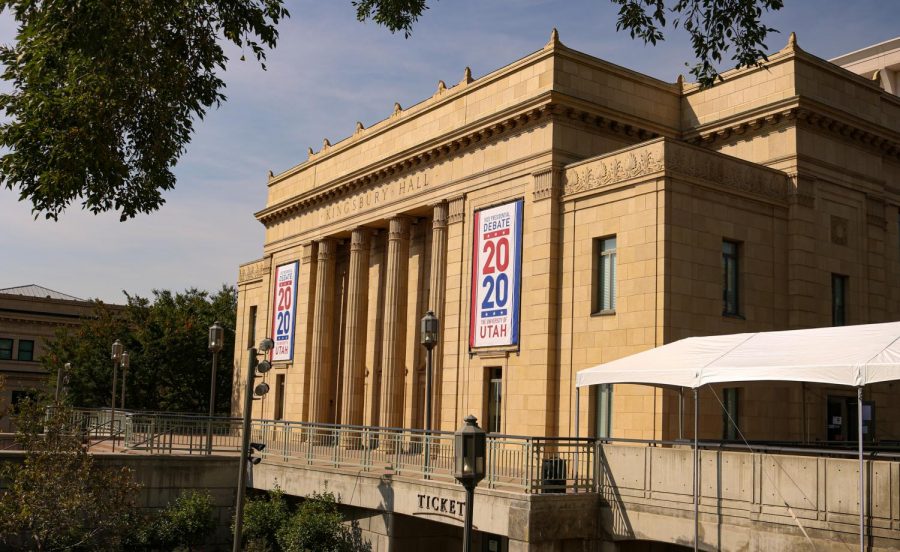 Location of the 2020 Vice Presidential Debate at the University of Utah on Sept. 25, 2020 (Photo by Ivana Martinez | Daily Utah Chronicle)

November 3rd, 2020. This will be one of the most important elections in our nation’s history. Now just weeks from election day, America will get to witness its presidential candidates take the debate stage two more times before we head to the polls. In the 2016 presidential debates, Donald Trump and Hillary Clinton spent more time attacking each other than addressing their ideas for serving the country. Rather than hearing about how each candidate was going to handle growing challenges in the Middle East, the nation watched the two nominees dodge questions and poke insults at each other’s personal mistakes. If former Vice President Joe Biden and President Trump are going to put on a clean debate, they need to focus on gaining the attention of undecided voters instead of bashing each other.

First, Trump and Biden need to pay special attention to young voters in their final two debates. The Brookings Institution found that “millennials and some members of Gen Z comprise 37% of eligible voters.” That’s roughly the same percentage that Baby Boomers make up. In past elections, many young voters have failed to make it to the polls, but because of the pandemic and social justice issues, there is going to be an increased turnout. A Harvard Youth Poll says that at least 63% of voters ages 18-29 will be voting this year.

To vote effectively, though, young Americans need to be educated about who they are voting for. Gen Z is entering the real world of politics and our future is on the ballot. We need to know how our candidates can make this country better, not only for the next four years but also for the rest of our lives — and they should use the debates to communicate that to us.

As the progressive candidate, Biden appeals more to the younger generation on topics like climate change and police reform. Trump knows that he’s unlikely to win many young voters, but he does need to close the gap between him and Biden in swing states to have a chance at clinching the election. It’s no shocker that we never see President Trump campaigning in California or Biden in Wyoming. These states are not up for grabs in most elections — but swing states are. Trump flipped 6 states in the 2016 election that contributed heavily to his win. To win in heavy-hitting battleground states like Florida, Ohio and Pennsylvania, Trump will have appeal to rural voters and working-class people who didn’t turn out in the 2016 election.

The middle class makes up a little over 50% of the US population, so middle-class votes are essential to winning the presidential election. In other words, the future president must appeal to middle-class voters on the debate stage by making a compelling case for their tax-hiking policies. The average American doesn’t agree with where their tax dollars are going. If a politician is going to increase taxes, voters need to know how that money will be spent. For example, Joe Biden’s campaign website states that he will “make a $50 billion investment in workforce training, including community-college business partnerships and apprenticeships.” As great as that sounds to the average young American, an expensive plan like this would likely require an increase in taxes for everyone — especially for people ages 35-55, who bear the largest tax burden.

On the other hand, President Trump has “proposed a $5 billion tax credit on donations that fund scholarships to private and vocational schools, apprenticeship programs and other educational opportunities.” Although this plan might result in a tax increase as well, it would be significantly smaller than one associated with Biden’s $50 billion proposal. In the two remaining presidential debates, both candidates should focus on making their expensive policies seem worthwhile to the American people. Voters need to understand why their potential leaders are for or against raising taxes and how it would benefit them.

An ideal debate consists of the nominees making a case for their presidency to the public rather than attacking each other personally. This means targeting audiences that haven’t made up their minds or might not know what to look for in a president. The debates are a chance for the American people to see what the candidates really care about and want for the nation. Trump and Biden shouldn’t waste that opportunity.