Ruth Bader Ginsburg’s Legacy: What She Left Behind 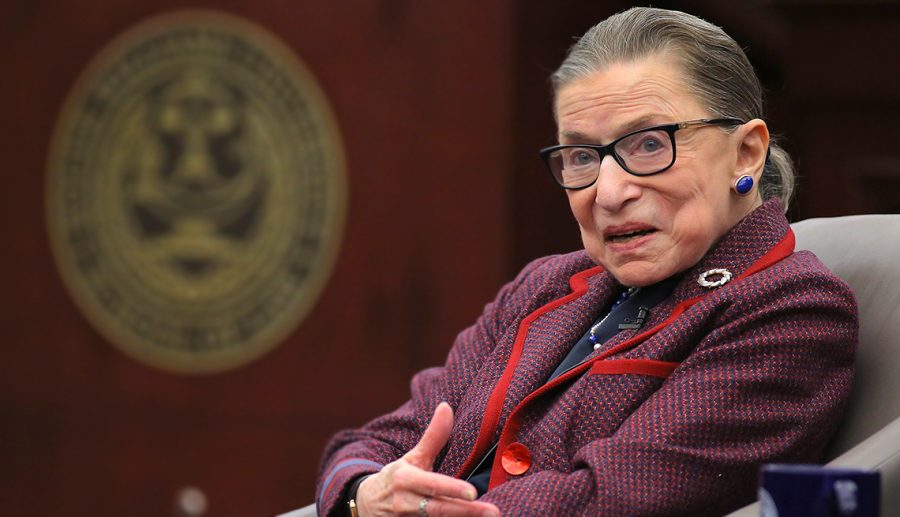 A day will not pass where Americans are not affected by Ruth Bader Ginsburg’s contributions to American law and policy. Her determination for gender equality in the United States opened many doors for men and women around the nation.

According to Ginsburg’s memoir, “In My Own Words”, which detailed her early life and career leading up to her spot on the United States Supreme Court.

After finishing her undergraduate degree at Cornell University, Ginsburg then attended law school. Ginsburg maintained a spot at the top of her male-dominated class at Harvard University while being a full time mom and caring for her husband, Marty, who was diagnosed with testicular cancer.

Upon graduation from law school, Ginsburg became an advocate and voice for many underrepresented people, many of whom still benefit from her work today.

In 1972, she founded the American Civil Liberties Union’s Women’s Rights Project. Through the ACLU, she worked through litigation processes to create systemic reform in areas of discrimination against women in the workplace including higher educational institutes and reproductive rights.

“Women’s rights are an essential part of the overall human rights agenda, trained on the equal dignity and ability to live in freedom all people should enjoy,” said Justice Ginsburg in reference to her time with ACLU.

Ginsburg, a champion of women’s rights throughout her career focused on litigation pertaining to sex and gender equality.

In 1996, Ginsburg held the majority opinion in the United States v. Virginia case, surrounding the Virginia Military Institute (VMI), which was long known for being exclusively only for male undergraduate students.

When brought to the Supreme Court, it was argued the admission of only male students was unconstitutional and violated the Fourteenth Amendment’s equal protection clause. Upon appeal, VMI’s admissions policies were found to be unconstitutional. The case is considered to be a landmark decision that greatly contributed to the equality of women in institutions of higher education. Following the decision, in 1999 she received the American Bar Association’s Thurgood Marshall Award for her contributions to gender equality and civil rights.

For over 50 years, Ginsburg was a trailblazer, aiding in protecting American people who were not typically represented in law. She was the second woman ever to be appointed to the Supreme Court only after her long career as a lawyer.

She inspired many other women to attend college and law school to break gender-based barriers.

“Female law students of my generation all saw her as a path-breaking, profession-changing icon — a person who helped us see what was possible and who had a hand in making it possible,” said RoNell Andersen Jones J.D, professor at S.J Quinney College of Law.

In and out of her seat on the Supreme Court, Justice Ginsburg represented what it means to be civically engaged. The implications of her open seat on the court will be seen throughout the United States and right here in Salt Lake City.

“In regard to the Affordable Care Act, people’s healthcare is at risk during the ongoing pandemic. If you care about healthcare, the environment or basic notions of equality you are at risk with her absence,” said Juliet Carlisle PhD, professor of political science at the University of Utah.

There are currently 11 free or income-based healthcare clinics located in Salt Lake City. These include dental, medical, behavioral and women’s health clinics serve people every day, despite their insurance situation. However, there is concern these clinics may not be able to continue providing services pending on the filling of the open seat and the presidential election.

Throughout her time on the court, Ginsburg became a pop-culture icon often known as the “Notorious RBG.” People of all generations wear her proudly on T-shirts, on their coffee mugs and on bumper stickers.

The changes in law during Ginsburg’s tenure included protecting women’s rights to have an abortion in Whole Woman’s Health v. Hellerstedt to the legalization of same-sex marriage in Obergefell v. Hodges. She worked tirelessly to ensure that men could not be preferred over women through the Fourteenth Amendment’s Equal Protection Clause.

Ginsburg’s time on the Supreme Court created a long-lasting effect on American Law and policy. Whatever the political agenda, her presence among Americans is felt through the laws she helped create.

“I hope that, in losing her, we don’t lose that enthusiasm for thinking about the Court’s work. I especially hope that young people will get involved. and make themselves more active participants in the dialogue on these issues. The health of our democracy depends on it,” Jones said.