Weglinski: Debates Remind Us That Politicians Are Just People 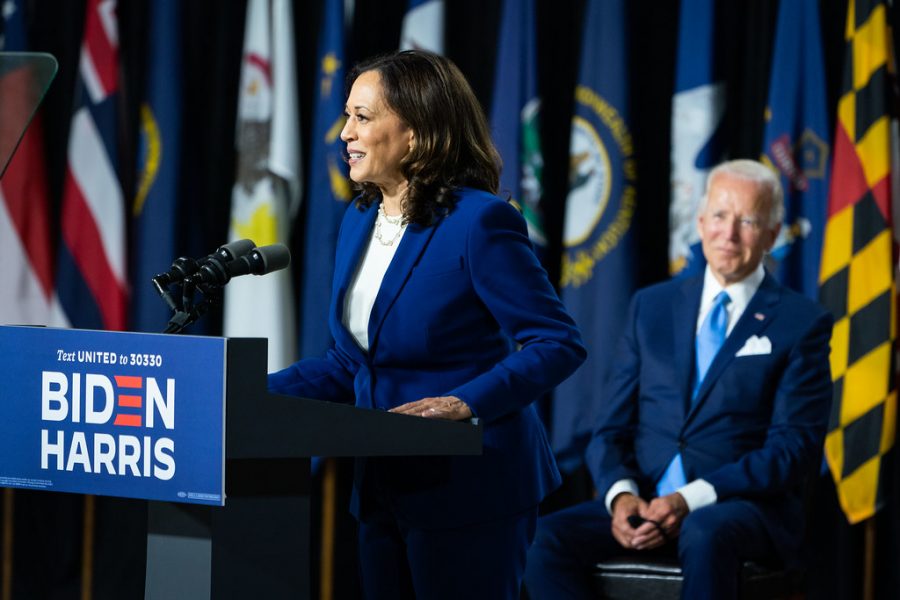 Courtesy of Biden for President

Last Monday the University of Utah announced the randomly selected winners to attend the 2020 Vice Presidential Debate. The drawing pool started roughly with 4,200 students and then dwindled down to 300 for the final lottery. Our own President Ruth Watkins drew the last 60 numbers and — to my disbelief —  I was a part of the lucky 1.5%.

With Trump being potentially immobilized in office due to COVID-19, and the historical old age of both presidential candidates, the record-setting attention given to this event was unsurprising. And here I was going to witness it all in-person. Senator Kamala Harris and Vice President Mike Pence would be just a couple of hundred feet away from me in a few days.

Flash forward to the long-awaited night, and a realization hit me mid-debate as I sat in Kingsbury Hall. Before that day, I had mentally placed all the esteemed politicians sitting around me — along with their prestigious accomplishments — in an elite bubble. But once the initial shock wore off, I realized that glorifying these individuals harms us as citizens. Politicians shouldn’t be glorified or idolized. Treating them as celebrities and not as public servants is a disservice to the American people and what we’re fighting for.

Seeing someone through a camera lens is starkly different from seeing them in-person. We’ve all been acquainted with this reality as COVID-19 continues to ravage this country and we’re left with Zoom calls and FaceTime. Even before this pandemic, idolizing figures on the sole basis of news coverage and social media posts inevitably leads us to be disappointed when we see them in real life. One Reddit page features thousands of horror stories about negative interactions between fans and celebrities.

Similar in some respects, seeing Harris, Pence and other prominent figures in all their glory wasn’t as ground-breaking as I thought it would be. Although it certainly wasn’t a disappointment, I realized that they also weren’t deserving of the idol status that I — and much of the general public — gave them. We sometimes fall victim to sensationalized news coverage and subconsciously begin viewing politicians as celebrities, or worse. At one Trump rally, The New York Times snapped a photo of a woman holding a sign declaring that “Trump Is ‘Our’ Savior.”

On the other side of the spectrum, the Obama administration is another example of idolatry taken to the next level, as his former presidency has been placed on a pedestal like no other. While Obama made significant strides during his term — and he was a good president overall — no one is perfect and we shouldn’t treat any politician as such, regardless of how well they align with us ideologically. In the words of Affinity Magazine writer James Ussery, “The negative effects of a politician’s decisions or policies […] are ignored in favor of the idealized version of the politician that the public has created.” Once we glorify politicians, we fall into dangerous territory with little accountability and objectivity. Instead of viewing public servants as idols, we need to look past their media presence and listen to their policies and proposals.

Moreover, when we idolize politicians, we inadvertently perpetuate the growing disparity between them and the everyday American. This can contribute to feelings of disconnect from our government and politics. In my experience as a freshman political science student, the political world can feel out-of-grasp. However, watching the debate first-hand made me realize that anybody can achieve this, and it doesn’t belong to an elite group of people. The U itself provided many opportunities for students to get involved at the VP debate — from volunteering opportunities to hosting a raffle. Outside of the debate, our very own Hinckley Institute offers internships at all levels of government to help students get experience in politics.

Witnessing the Vice-Presidential debate in-person was a wake-up call to me — politicians shouldn’t be glorified nor worshipped. To quote Ussery again, “While it is certainly fine to like someone in office, it is both very easy and very damaging to advocate a politician based solely on an image rather than actual merit.” If we want legitimate change in government, we must stop placing our country’s public servants on an untouchable pedestal. At the end of the day, these people are meant to serve us.