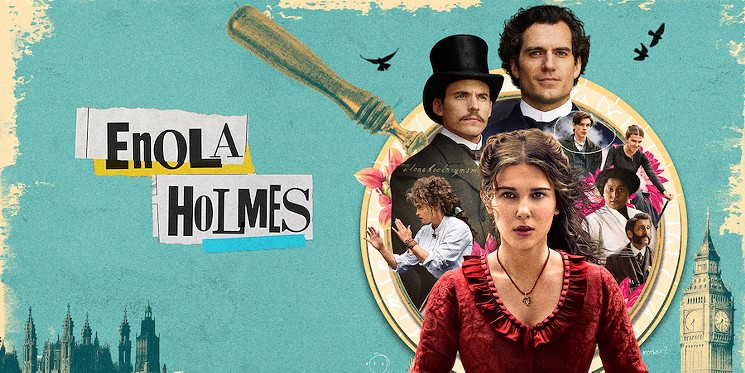 “Enola Holmes” tells the story of Sherlock Holmes’ sister — a young girl who has just turned 16 and is perplexed by the sudden disappearance of her mother.

Throughout her life, Enola (Millie Bobby Brown) has been taught that she will do very well on her own. Following the death of her father at an early age, her brothers — Sherlock (Henry Cavill) and Mycroft (Sam Claflin) — soon left home to begin their respective careers. For the majority of Enola’s life, it has just been her and her mother. When her mother disappears, Enola must confront the sudden loneliness she experiences and embarks upon her own coming of age narrative.

Early on in the film, Enola reveals that her name spelled backward is “alone.” The film follows Enola as she learns to be alone and trust new people when she realizes she can’t do everything on her own. With her mother as her teacher, Enola was taught to read, write, play sports, practice combat and exercise both physically and mentally. At the time, many of these areas were deemed unfit for women — and other tasks, such as embroidery and taking care of the house, fell into women’s sphere of influence.

At the turn of the 20th century, the discussion of the spheres of influence and what role women have in society were becoming more prominent. The film constantly references an upcoming Parliamentary vote on the “reform bill” — a new piece of legislation that mirrored England’s Third Reform Act of 1884, which gave more members of the working class the right to vote. Although the film takes a mostly lighthearted approach to these historical discussions, the realities of oppression and separation of the time are present throughout.

As Enola embarks on her journey to find her mother in London, she meets another runaway — Viscount Tewkesbury (Louis Partridge). While they don’t stick together for the entire film, their partnership teaches Enola to have faith in others, and despite her robust and unorthodox education, there is still much about the world that she still needs to learn to understand. But regardless of any shortcomings she experiences, her investigative and detective skills prove that she truly is a part of the Holmes family.

“Enola Holmes” is fun and lighthearted in the midst of serious discussions about historical misogynistic behavior. Enola often breaks the fourth wall to talk to the audience directly, and these filmmaking choices give the audience a look at how Enola thinks and interprets her reality. For fans of “Sherlock” or Sir Arthur Conan Doyle’s short stories, “Enola Holmes” offers a new and refreshing take on the detective narrative.

“Enola Holmes” is based on Nancy Springer’s series of novels “The Enola Holmes Mysteries,” and while it may not be as intellectual or dense as other Sherlock Holmes adaptations, there are still hidden easter eggs and references to the classic stories that brighten the film’s narrative.

“Enola Holmes” was released on Sept. 23, 2020 and is available to stream on Netflix.