Title IX: The Changes and the Culture 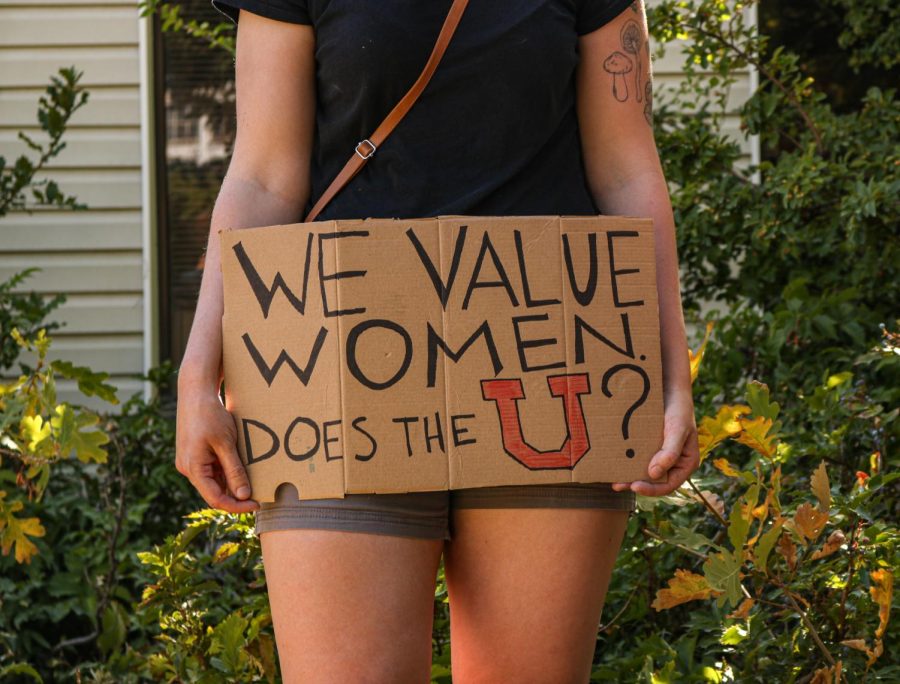 UnSafe U protesters gather at the Public Safety Building on the University of Utah campus in Salt Lake City to protest the actions of officers involved in the Lauren McCluskey case on Aug. 6, 2020.

By Ivana Martinez and Kayleigh Silverstein

On Aug. 14 the new Title IX changes went into effect on campus, the final rule was drafted earlier in May by the Department of Education and Education Secretary Besty DeVos.

In an attempt to address the Title IX changes on campus, the U released a statement on Aug. 24 stating they worked to keep existing policies in place.

“The policies continue to reflect the U’s ongoing commitment to prevent sexual misconduct, support those who experience harm and to conduct a fair, transparent and safe grievance process for all parties involved,” the statement read.

According to the statement, the new regulations include enhanced training requirements for the Title IX coordinator, investigator and decision-makers.

While most of the U’s policies remained the same, the new Title IX regulations make hearings a requirement in all sexual misconduct cases.

The DOE narrowed the definition of sexual harassment from the Obama administration, raising concerns of allegations being dismissed if they do not directly align with the new definition.

According to Sherrie Hayashi, the director of the Office of Equal Opportunity and Affirmative Action and the U Title IX Coordinator, the definitions of sexual harassment, sexual exploitation and intimate partner violence stay the same as they were previously, but DeVos’ definition of sexual harassment was added.

“So, it certainly can be read more narrowly than previously but we’ve maintained our existing definition,” Hayashi said.

By maintaining the original definitions, Hayashi said they are still able to process allegations that do not fit DeVos’ definition.

“If someone comes in and files a complaint, we will look at it to see whether it meets the Title IX definition and we’ll accept that complaint, but if it doesn’t … we would still have the ability to take that complaint and address it through university policy,” Hayashi said.

However, the U is still able to maintain their own policies in addition to national ones.

“They’re like a baseline that we’re required to meet, but that does not prohibit the university from having additional policies that may choose to go above and beyond,” said Annalisa Purser, the director of administration for the office of the chief safety officer.

Hayashi also said there are certain supportive measures the OEO has in place that will not be affected by the new Title IX regulations.

“Whether or not they file a complaint with our office and whether or not the behavior occurred on campus, whether the misbehavior was perpetrated by someone who’s not affiliated with campus  —  all individuals are entitled to those supportive measures, if they choose to take us upon them,” Hayashi said.

Hayashi said because the U is committed to its students and community, they tried to maintain many of their original policies. She said the various routes a victim of sexual misconduct can take: law enforcement, the university process or both.

If a survivor chooses to file a report, law enforcement normally conducts an initial contact interview with the sexual assault survivor in person. However, due to COVID-19 restrictions, these meetings must be conducted virtually.

“It’s important to note like on our [sexual] assaults we do like to do those interviews in person and we like to read the expressions of the victim and or the suspects so that we kind of can take in that information,” said Larimie Lancaster, a representative of the U police department.
The Impact
Some worry the new Title IX regulations could produce a “chilling effect,” making victims less willing to come forward.

“When the U addresses and communicates about the Title IX changes, they need to make sure they validate the difficult emotions surrounding them. They need to communicate transparently and in a way that is accessible,” said Ellie Goldberg, a victim-survivor advocate at the U.

According to the 2020 campus climate survey done by the U Center for Student Wellness, knowledge about university policies and resources related to sexual assault have increased since 2018. However, the overall perception of safety and university response has decreased.

Additionally, the rates of harassment and sexual assault in 2020 decreased for almost all populations of students.

The 2020 campus climate survey confirmed students do not come forward because they do not believe the incident was serious enough or nothing would be done if they were to file a report.

“More than 90% of those who participated that were sexual assault victims did not report the assault … 65% of U of U students did not believe that their assault was serious enough to report,” Goldberg said.

Goldberg said victim-survivor advocates can help survivors decide if they do wish to come forward.

“Our confidential advocates can help them talk through what an investigation looks like, how it might impact them, and then if they decide to report, their advocate will be with them every step of the way,” Goldberg said.

Goldberg expressed concerns over how the pandemic is going to affect these reports. She said the first few weeks of college is known as the “red zone,” because students are more vulnerable to sexual violence.

“Folks in minoritized communities on-campus experience sexual violence at higher rates. One in four students who are gender-non-conforming, transgender, genderqueer identities, or questioning are sexually assaulted in college,” Goldberg said.

Title IX complaints at the U can now be reported through an online reporting form. Complaints of sexual misconduct should be made directly to the Office of Equal Opportunity and Affirmative Action at [email protected] or 801-581-8365.