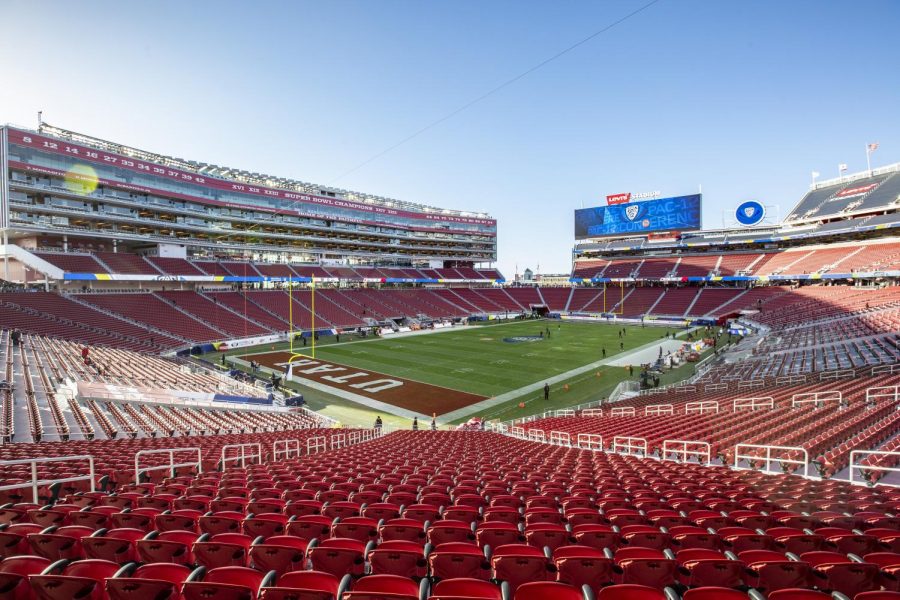 Just like most of the sports world, the Pac-12 has had a rollercoaster of a year. From having to cancel the remainder of spring sports due to COVID-19 in early March to deciding to reverse their course on playing football this fall nothing has been normal for the Conference of Champions.
March 12, 2020:
Midway through the Pac-12 Men’s Basketball tournament, the conference announced that not only would they be canceling the remainder of the tournament but also all Pac-12 competitions and championships. The most notable event to be canceled was the Pac-12 Gymnastics Championship that was slated to take place at the Maverik Center in West Valley City on March 21.

The NCAA also announced that they would be canceling all remaining spring and winter championship matches. This decision included both March Madness and the NCAA Gymnastics championships. This announcement came just days after the governing body said that March Madness would still happen but without fans.
March 13, 2020:
The University of Utah announces the cancellation of all practices and competition in accordance with the rest of the Pac-12. Utah football would not return to spring football after taking the week off for spring break.

“We understand the seriousness of this worldwide pandemic and support every measure being taken in the interests of public health and safety,” said Utah Athletics Director Mark Harlan in a statement. “I also want to acknowledge the extreme disappointment our student-athletes are experiencing as they adjust to the finality of this on so many levels. We will continue to support them in every way while giving them the freedom to make the safest and healthiest decisions for them.”
March 30, 2020:
The Pac-12 announced the suspension of all in-person team activities through May 31. The conference stated some exceptions due to student-athlete well being in the ruling and also stated there would be a re-evaluation period to change their policy in the future.

The Division I Council approved an extra year of eligibility for those student-athletes who were members of spring sports teams whose seasons were cut short. With that decision, the NCAA also changed financial aid rules to allow teams to carry more members on their teams.
May 28, 2020:
The Utah Athletics released their plan to allow student-athletes back on campus for voluntary workouts starting on June 15.
June 17, 2020:
The NCAA Division I Council voted in favor of a six week lead up period for those schools who would be playing football in the fall.
July 10, 2020:
The Pac-12 announces their intent on playing a conference-only schedule for football, soccer and volleyball. The conference stated that the plan was to ensure the health and safety of student-athletes and coaches and also to allow flexibility due to COVID-19.
July 31, 2020:
The Pac-12 released the new conference only schedules for football. All 12 teams were slated to play a 10 game schedule starting on Sept. 26.
August 2, 2020:
Pac-12 student-athletes launched the #WeAreUnited movement and stated they would opt-out of the 2020 season if their social justice and COVID-19 concerns were not met.
August 11, 2020:
The Pac-12 canceled all athletic competition through the calendar year. The conference cited testing frequency as well as contact practices for the cancellation.

“We know this presents a significant disruption to so many of our student-athletes across multiple sport programs, and especially for our seniors in those sports. For months we have been working diligently in consultation with top medical experts to create a safe path for competition in these sports to take place, and using all of the information and time available to us. However, with the challenges and complexities presented by COVID-19, the medical advice does not support conducting fall sports seasons,” Harlan said in a statement.
September 3, 2020:
The Conference of Champions signed a historic deal with The Quidel Corporation for rapid COVID-19 testing. Each school would be able to test student-athletes in close contact sports almost daily. The deal between the conference and Quidel put the conference back on track to resume play.

“The availability of a reliable test that can be administered daily, with almost immediate results, addresses one of the key concerns that was expressed by our medical advisory committee, as well as by student-athletes, coaches and others. At the same time, our partnership with Quidel, the industry leader in point-of-care antigen testing, will provide crucial research data that will benefit our members’ communities as well as the entire country,” Pac-12 Commissioner Larry Scott said in a statement.
September 17, 2020:
The NCAA ruled that the 2020-2021 men’s and women’s basketball season would start on Nov. 25. They also stated that no scrimmages will be allowed before that date.
September 24, 2020:
It was announced that Pac-12 Football would make its triumphant return starting on Nov. 6. The Pac-12 CEO group rolled out a seven-game conference only schedule for all twelve schools. The resumption of football comes in part with the partnership with Quidel for daily testing.

Larry Scott also announced that the winter sports such as men’s and women’s swim and dive and gymnastics could start practicing in accordance with state and local regulations.

The other fall sports such as women’s soccer and volleyball will still compete come Spring 2021.

As of Sept. 28, no schedules had been released for the sports set to begin in November.