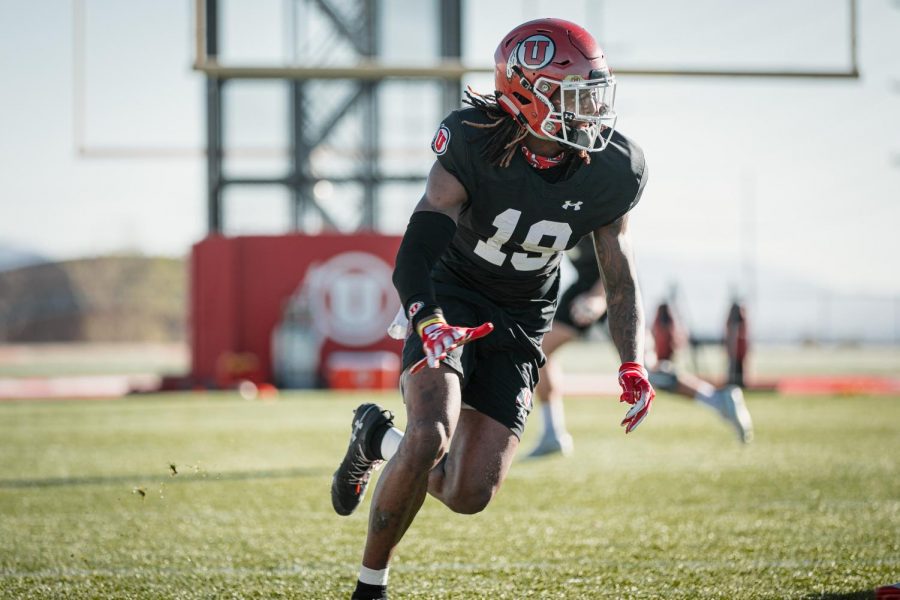 The doors are wide open for some new playmakers to take the field in the Utah secondary this year. After losing four members of the group to the NFL, the backfield will look vastly different come Nov. 7.

While there are some members of the secondary unit who were here last season, RJ Hubert is one of the few members who took a good amount of reps last season. But Hubert’s season was cut short after he suffered a season-ending ACL tear towards the tail end of last season.

For him, being on crutches was one of the hardest parts of the rehab process.

“I’ll never take for granted the ability to walk, to run, to jump, those things I’ve been doing since I was a little kid, I won’t take those things for granted again,” Hubert said. “I’m really grateful for where I am right now, and I know I can get even better as well.”

Hubert is currently slated to be the starter in the free safety position based on the pre-season depth chart that was released last week. But the question is who will be lining up next to him as the strong safety.

Vonte Davis is currently listed to be the starter at the SS position, and Hubert says that the bond the two of them share is strong. This is a result of the reps the pair took together with the second team last year.

Another name that has been making waves this fall is freshman Nate Ritche, who is projected to be Davis’ back up.

“He’s been coming along nicely,” Davis said. “From my experience, he’s learned the plays faster than I did. When I look at him, he’s one of those players that can be ‘that dude.’”

Head coach Kyle Whittingham is also high on what Ritche is already bringing to the table.

“He’s done a great job ever since he started with us back in the summer. He’s a smart kid, he’s tough, he’s got size – reminds me of Chase Hansen coming out of high school, not quite as big a frame as Chase but he’s faster, where he’s more of a true safety,” Whittingham said.

While the safeties have been showing progress, the corners have been faced with a few more challenges. Replacing the likes of Jaylon Johnson is not an easy task and corners coach Sharrieff Shah’s unit is feeling the pressure.

“We are force-feeding our players through a large fire hose to get our guys ready, it’s difficult, as we continue to implement our defense, we can’t slow down to teach them or catch them up on things, so it’s difficult,” Shah said. “We see glimpses of consistency but nowhere near where I’m comfortable with in terms of his consistency.”

One name that had been brought up a lot recently is JaTravis Broughton, who took some reps last season, but according to Whittingham, he is the No. 1 corner for the Utes right now.

“JT Broughton is probably our No. 1 corner right now, Malone Mataele has had a good first four days, as has Clark Phillips. Faybian Marks is doing a nice job. Bronson Boyd hasn’t been out there full time, he’s a little nicked up but when he’s out there, he’s performing at a high level as well,” Whittingham said.

“Broughton is expected to be one of the leaders in the secondary… He’s doing things that we anticipated it needing to happen by,” Shah said. “What I want to see from him is improved ball skills and ball tracking ability, because thanks to his god-given ability, he’ll put himself in a position to make plays but we just need him to start making those plays on a more consistent basis. It’s also understanding where to be and why to be in certain zone coverages.”

Whittingham added that things will start to shake out more as the pads come out and the team is able to make more evaluations.