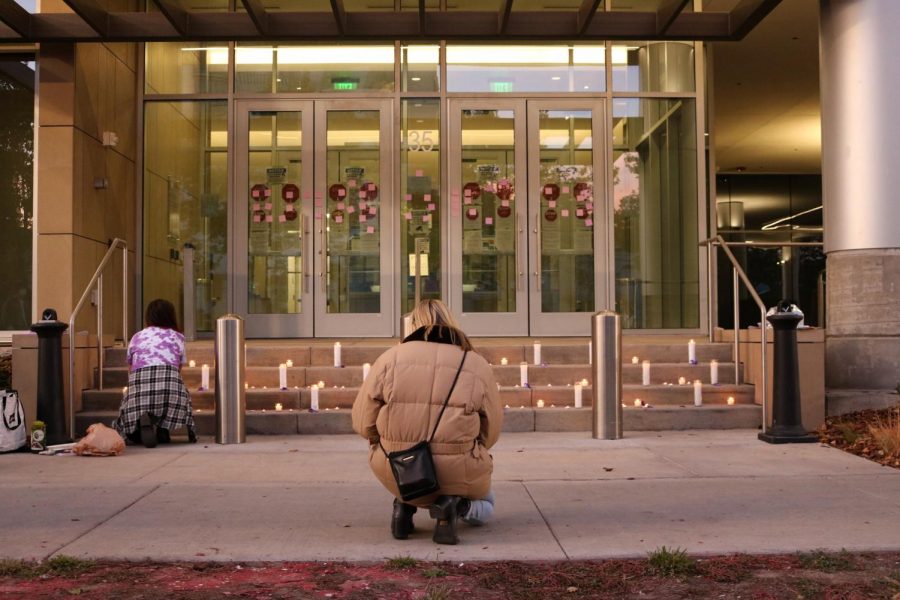 On the second anniversary of Lauren McCluskey’s death, the Salt Lake City sky was nearly cloudless.

Attendees sported Lauren McCluskey Foundation jackets and vests, hands tucked into pockets as they walked around the McCarthey Family track during a memorial walk in collaboration with ASUU. The wind lifted a black flag emblazoned with the Foundation’s emblem— a white track shoe with Lauren’s name inside, wings on the heel.

“I hope [the event] becomes an annual thing,” Ayanna Amaechi, student body vice president of university relations, said. “I know that foundation collaboration isn’t common within ASUU but I hope that this serves a place on our campus each and every year.”

Hours after the University of Utah announced their $13.5 million lawsuit settlement with Matthew and Jill McCluskey and admitted partial responsibility for the death of Lauren McCluskey, attendees took to the track to walk two laps in Lauren McCluskey’s honor. From 1 to 4 p.m., students and community members passed white and red signs attached to hurdles that shared statistics on interpersonal violence.

Statistics included 21,000 calls a day to Utah’s domestic violence hotlines, three domestic violence-related suicides on average every month, and 15% of all violent crime in Utah results from partner violence.

“No one will be left abandoned and unsafe, given a deaf ear then abused by those charged with their safety. Hold accountable those too fearful to hold themselves to that higher standard that Lauren charges us all with,” said Chris Vogel, one of McCluskey’s former track coaches.

Attendees of the walk were encouraged to take Lauren’s Promise, a pledge to believe victims of threatening behavior, and sign posters that read, “I Commit to Listen. I Commit to Believe.” As of Oct. 22 2020, 80 universities across the country have professors who include the promise in their syllabi.

“This is an attempt to bridge the gap that is developed between student and authoritative groups on campus. We want to generate one U by making campus feel safer by connecting people to those who they can trust,” Amaechi said.

With a plaque in McCluskey’s memory behind them, the McCluskey family and other speakers gave afternoon remarks at 3 p.m. Purple ribbons decorated the tree planted in Lauren’s honor. Flowers were placed at the base.

“The overarching purpose of the Lauren McCluskey foundation is both to honor the gentle, caring, beautiful young woman and work to ensure that such failures never happen again,” said Ron Mittelhammer, a foundation supporter and family friend of the McCluskey’s.

Mittelhammer also emphasized that “every penny” of the U’s settlement will go to supporting foundation initiatives and actions.

“As new rules on sexual misconduct change campus safety nationwide, there’s an immediate need to build on these efforts. New policies, programs and training must place student safety at the forefront of the conversations,” Mittelhammer said.

Among the attendees included the U men’s basketball team and McCluskey’s track teammates.

“At the beginning [Lauren’s death]  kind of almost fueled our racing, because we actually raced the weekend that it happened,” Sarah Newton, a senior and McCluskey’s former track teammate, said. “Now, a lot of our gear has Lauren on it. I just kind of think about her while we’re out here and run for her.”

Matthew McCluskey, Lauren’s father, said despite how badly his daughter was treated, he hopes that other survivors go to the police and seek out resources if needed.

“The challenge is going to be to have the biggest impact possible on campus safety nationwide, and we’re going to be very systematic and smart about it,” he said. “I think we’ll end up having a very large positive impact.”

At 6 p.m. on the same day, UnsafeU, a student organization unaffiliated with the U, held a vigil outside of the District Attorney’s office to honor Lauren’s memory.

Participants wrote messages such as “She was more than just a victim” and “Lauren, we love you more than anything. I’m sorry” on purple sticky notes and stuck them to the doors of the DA’s office.

The McCluskey family stood together, occasionally lighting candles on the steps and writing notes, with the sun setting behind them.

Caroline, a sophomore at the U who wanted to keep her last name anonymous, said as a survivor of domestic violence herself she wants to support other survivors.

“We’re gonna keep talking about this. This isn’t gonna go away just because [the U] admitted what [they[ did wrong. We’re gonna keep on doing the work we’re doing, and we’re gonna do it with or without you, and we hope to do it with you,” Caroline said. “For survivors, it gets better…speak out, speak up for your fellow survivors as well, if you’re in a situation, there are resources.”