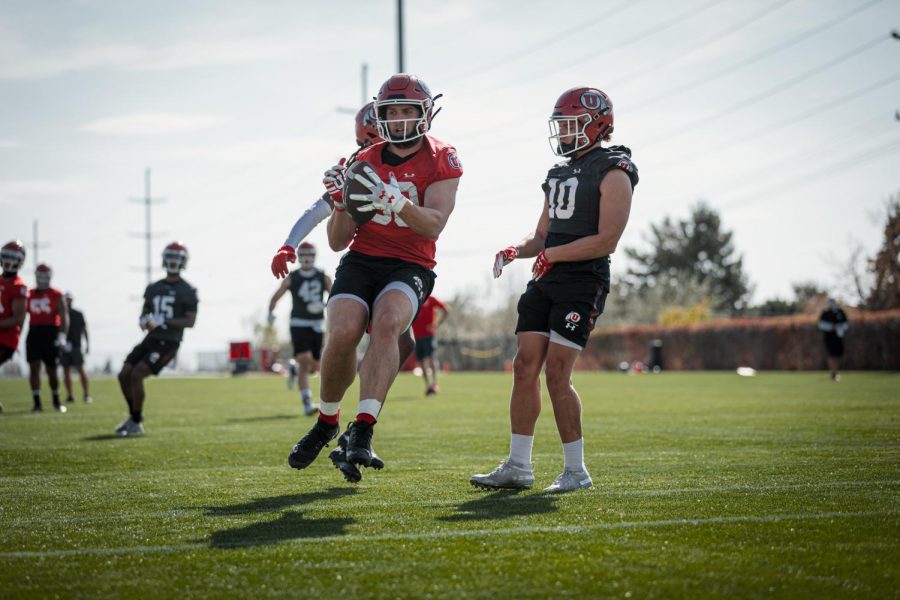 With two of the best tight ends in the conference, the Utah football team is looking to build off a very solid past season for the group. Not only is leading TE Brant Kuithe back for the Utes, there are multiple other players around him who are being prepped for big games this fall.

As Utah is about to enter their second season in the Andy Ludwig system, tight ends coach Freddie Whittingham is excited to see how the offense continues to evolve under Ludwig.

“We were a spread team for a several years there with Urban Meyer and really didn’t recruit a bunch of tight ends, and when Andy Ludwig came in and his offense really utilizes tight ends,” Whittingham said. “We’ve been able to develop a few that we had in the program and recruit some more. I feel like we have a very strong group right now that will hopefully help us contribute on the offensive side of the ball and score points to win football games.

This group is loaded with the aforementioned Kuithe leading the charge. The team also has players like Cole Fotheringham, Thomas Yassmin, Ali’i Niumatalolo and the newest addition to what Whittingham calls the TNT Squad, San Diego transfer Dalton Kincaid.

Kincaid, who played last season at San Diego, was an AP All-American in 2019. Last season he accounted 44 receptions for 835 yards and eight touchdowns. In addition, he was the leading TE at the FCS level in yards per catch last season with 18.98 yards per catch. He also ranked second among FCS tight ends in receiving yards.

“I mean you can never have enough good players, right? So, the role of recruiting is to recruit the best possible players you can find to join your program,” Whittingham said. “The guys that are here welcomed Dalton with open arms and have been really helpful to him in getting him acclimated to the program and understanding how we do things here. Dalton has come in and done a really nice job for us.

“Thomas [Yassmin] and Dalton have had amazing camps, and we are stoked to have Dalton alongside us. They both are excellent route runners and pass catchers, and they get after it on run blocks as well. They’re just great additions to the room and we’re super excited to have them alongside us and get them out on the field,” Fotheringham said.

Having players like Kincaid and Yassmin with the tandem of Kuithe and Fotheringham help take some of the pressure off Kuithe who might be facing a tougher season since exploding onto the scene last season. But Kuithe isn’t going to let all the attention lead to a drop off in production this year.

“I’ll have to get in film study a lot more and just see tendencies, and I have to win my one-on-ones,” Kuithe said. “I expect a lot more because a lot aren’t expecting me to do what I did last year, so getting extra attention is OK, I just have to prepare more before the games.”

To help step up his game, Whittingham has asked Kuithe to bulk up to help make him a more well rounded tight end.

“Brant is a pro, he wants to get better, he has that inner desire to be the best that he can be and perform at his top level,” Whittingham said. “What we’ve asked specifically of him is to put on a little more bulk, hit the weights, just continuing to get bigger and stronger, so that he can have more of a big impact in the run game. Then we asked him to step up more as a leader, he’s been elected to the leadership council and just making sure the team as a whole is doing what we need to do to play at a championship level.”

Whatever the coaches ask him to do, Kuithe is showing he is ready for the job.

“There is always room to improve and be a better teammate. Overall, I just want to be a better player and do the things that the coaches ask me to do and execute on all of those things,” Kuithe said.