Back to the Hardwood: Previewing the Runnin’ Utes 2020-21 Season 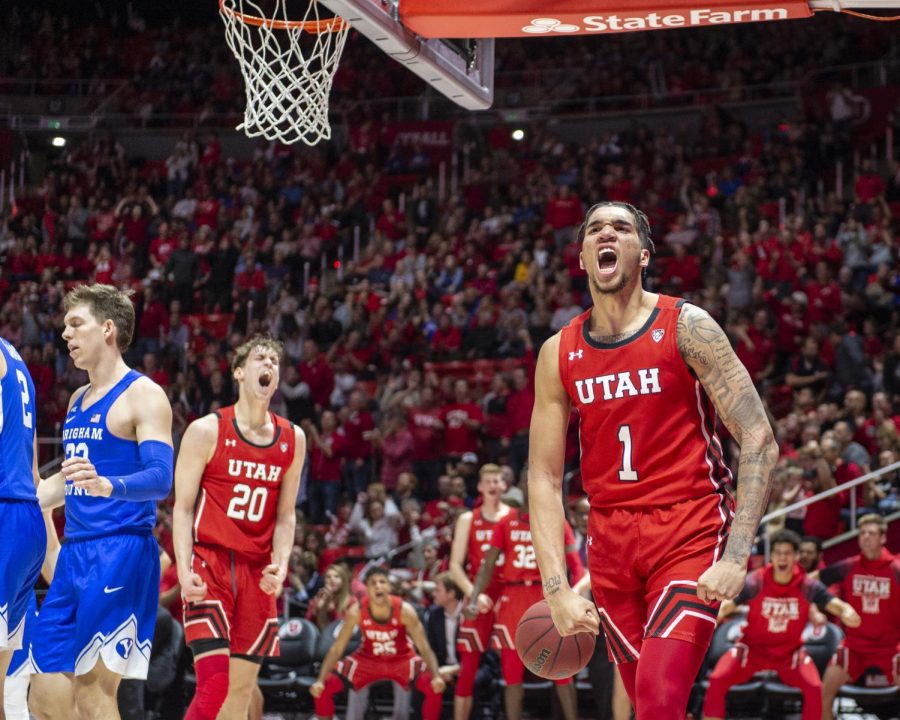 By Cole Bagley and Ethan Pearce

After a premature ending to a difficult 2019-20 season, the Utah men’s basketball team is looking for growth and improvement in their new campaign. Before COVID-19 shut down the entire NCAA, the Utes had a 16-15 overall record (7-11 in conference, 12-2 at home, 1-9 on the road) which was fairly disappointing for many. But few recognized that Utah had one of the youngest programs in the country with 11 freshman and four sophomores. After a season full of experience and a long offseason to develop their game, the team is looking to have a much stronger performance as they return to the hardwood for an adjusted 2020-21 season.

Pac-12 play:
The Utes finished ninth in the Pac-12 last season with an abysmal 7-11 conference record. Not only were they ninth in the conference, but they were also dead last in the Pac-12 South as every other team finished above .500. They finished 2-6 in the final season standings. The team struggled immensely on the road as they didn’t win a single conference game away from the Huntsman Center. However, Utah was nearly unstoppable on their home turf, as they went 7-2 and only lost to Oregon and UCLA who ended up being the top two teams in the conference.

Chances are the conference won’t look much different this season from the last. While Oregon did lose two of their best players, their roster is still incredibly deep with stars Chris Duarte and Will Richardson returning, both of whom averaged double figures. UCLA will also look to repeat last year’s success as all five starters back to suit up for the Bruins.

While these two teams have set the bar as far as performance, Utah will have to compete in what is a plethora of talent amongst the rest of the Pac-12. Arizona State’s returning offensive superstar and Pac-12 leading scorer Remy Martin averaged 19.1 points per game. Stanford is returning four of their starters who managed 20 total wins last year, Arizona’s 2020 recruiting class was ranked No. 5 in the nation and USC signed the nations No. 3 overall prospect, 6’11 Evan Mobley. These are just a few examples of how loaded the Pac-12 will be this year, and so Utah will need its star players to rise to the occasion in order to compete.

Roster Outlook:
Rylan Jones is one of those players that the Utes will be expecting a lot from this season. The sophomore guard lived up to the hype last season as he averaged 9.6 points per game, 2.9 rebounds, 4.5 assists, and shot 40% from the field. He also stood out in the comeback game against BYU, where he recorded 25 points and 6 assists to fuel Utah to a 102-95 victory.

“I need to cut down on my turnovers. I think that’s my biggest goal this year is to be out there and be more in control of the game than I was last year,” Rylan Jones said on the first day of practice. “And then I worked a ton this offseason on my three-ball off the dribble, a quicker release and my shooting consistency. If you are knocking down a lot of threes, they have to get up and guard you further out on the floor, and that creates more opportunities for me to help my teammates.”

With teammates like Timmy Allen and Alfonso Plummer lighting it up from the floor, Jones should be looking to heavily increase his assist totals and see if he can’t double what they were last year.

Timmy Allen is returning to the Utes after leading the team in scoring last season. Allen will be a junior this year after starting all 31 games last season. Allen scored 17.3 points per game last year to go along with 7.3 rebounds. At 6’6 he is a versatile, do-it-all forward with realistic NBA hopes. A strong season for him this year would go a long way to improve his draft stock and get him into the NBA, should he decide to go pro. He was All-Pac-12 2nd team last season and made the All-Freshman team in 2019. He is a real contender for 1st team honors this year and will probably lead the Utes in scoring again as they look to improve on last season.

Alfonso Plummer is the 6th man for the Utes and he will continue to be the sniper of the second unit. Plummer is a senior this season but will be in only his second season with the Utes. Plummer transferred to the U from Arizona Western College. Last season, he shot 42% from three. Against Oregon State on March 11, he set the Pac-12 record for threes made in a game with 11, breaking Klay Thompson’s record of eight from 2011. With the eligibility clock frozen for winter athletes, Plummer could potentially return for another season despite being the lone senior on the roster.

Branden Carlson was a welcomed surprise last year as the seven-foot big man averaged 7 points per game along with 3.9 and 1.4 blocks. Carlson’s strength and tenacity were his biggest asset last season as he started to make a name for himself when it came to protecting the rim. He seemed to be everywhere against Stanford as he recorded 8 blocks and propelled the Utes a 64-56 OT victory over the Cardinal. Teammate Rylan Jones spoke very highly Carlson after the first day of practice, mentioning that he was playing really well and has become a legitimate shooter.

New to the Utes is Pelle Larsson. Larsson spent the last few years with RIG Lulea and BC Lulea in Sweden. Born in Nacka, Sweden, Larsson is a nice find for Utah and the team seems to be really excited about his prospects.

“I think he’s done quite well,” said head coach Larry Krystkowiak. “He’s a talented kid. He understands the game, he’s got a nice competitive spirit about him. He’s been involved with a pro league in Sweden, so this is kinda new, some of the culture stuff that we’re talking about, I think, is pushing his buttons and it’s been pretty productive. So barring anything unforeseen, I think he’s gonna be an integral part of what it is we’re trying to do.”

The Utes are trying to stay on top of the season despite nothing being certain. Games could be cancelled, postponed, or rescheduled last second if a COVID-19 outbreak were to happen here or with any other team. Coach Krystkowiak is preaching a message about being ready for anything and controlling what you can control. Regardless of whatever teams Utah ends up playing this year, or how many games happen, this team is well set up to succeed. With all of Utah’s freshmen from last year gaining another year of experience, the team is certain to be better than last season. They have a real chance to make some noise in a competitive Pac-12, and they have a bright future ahead with a strong young core.