No Fans In The Stands, A Grim Reality For Students 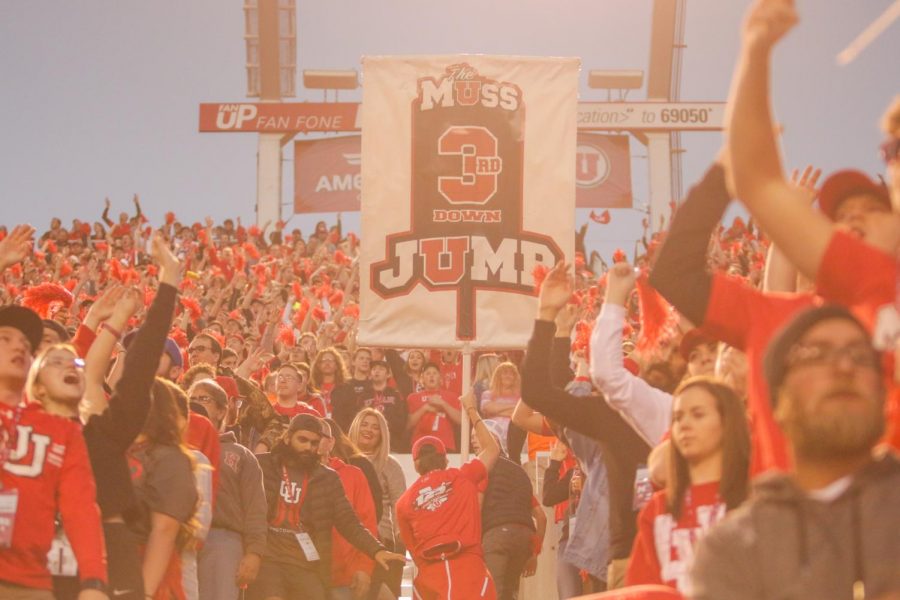 University of Utah's MUSS cheers during a third down during an NCAA Football game vs. USC Trojans at Rice-Eccles Stadium in Salt Lake City, UT on Saturday, Oct. 20, 2018.(Photo by Curtis Lin | Daily Utah Chronicle)

The University of Utah will be playing football this fall, but this year will be different because of the raging COVID-19 virus. There will be no fans in the stands and students are having to adapt.

The Pac-12, unlike the SEC who is charging forward with packed stadiums with little to no social distancing, is taking a more measured approach. No fans will be allowed to attend games this fall in person. For the student body, that’s a big deal. College football games are a huge part of college life.

Alex Guymon is a sophomore at Utah and a computer engineering major. He is disappointed he won’t be able to attend the games this year in person.

“I’m super bummed I won’t be able to watch the games in person this year with the MUSS. It was one of my favorite things to do last year,” Guymon said.

Ellie Russell is a freshman and a modern dance major at the university. She says she is excited for her first year of watching Utah football and notes it is one of the experiences she most looks forward to throughout college. College football is a social experience that students use to help develop social skills but also keep their mental health strong as a form of self-care.

“I am super excited to get back in the stadium when they allow that,” Russell said.

Students are finding new ways to watch the games this year. Sydney Mendel is an elementary education major. She plans on watching Utah football this year on TV with her cousins at their house. For Mendel’s, football is a family affair. She loves watching the games with her cousins.

“Yeah, I’m excited, I’ll be watching with my cousins at their house,” Mendel said.

Many people bond with family over football. Fathers, sons, mothers and daughters get together to watch the Utes play. It is a bonding experience that can last a lifetime. Mendel says she loves watching the games with her family and has been doing so for the past five years.

Guymon is also at a loss for how he might watch the games. He doesn’t have a tv subscription and will be relying on his roommates for logins so he can watch the Utah games that won’t be televised on public airwaves.

“I’m going to be watching with my housemates. I don’t have cable, but I think they do so I will just be hanging out and watching with them this year,” Guymon said.

Meanwhile, some students will be watching online. Russell is one of those students who will be using technology to watch the games.

Despite finding new ways to watch, most students at the university are excited to watch the Utes play.

Guymon is excited to see the team play this year. So is athletic director Mark Harlan, who said this summer the program stood to lose 60 million dollars in revenue if they didn’t play this year. With each of the televised games being worth somewhere around 5 million dollars a pop. With all games being played on Fox and ESPN with a seven-game schedule, Utah should be able to make just over half of that projected lost revenue back. Guymon is just happy to be able to watch from home.

“I am so excited they actually are playing this year. If it means that we have to stay and cheer from home instead of going to the games so they can play, it is worth it,” Guymon said.

Some students at the university aren’t that into football this year, though. Of the 10 to 12 students approached for this article, eight of them said they weren’t really interested in Utah football this fall.

A lot is happening right now in our world. It makes sense that many students feel they don’t have time to sit down and commit to watching a four-hour football game on the weekends. Especially with the rigors online classes add to students’ already packed schedules.

Without a game being a set social event to arrive at, many students seem to be tuning out. While there are lots of passionate football fans at the university, it is worth noting that many students attend these games as a way to have a good time, meet new people, and frankly, party. COVID has wiped away that possibility. Still, socially distanced Guymon will charge on though.

He is excited about the possibilities of watching football with his roommates bring this fall.

“We’ll probably make a night out of it and get some dinner and sodas and things and just really enjoy the game together,” Guymon said.

The right attitude to have in an increasingly weird year.