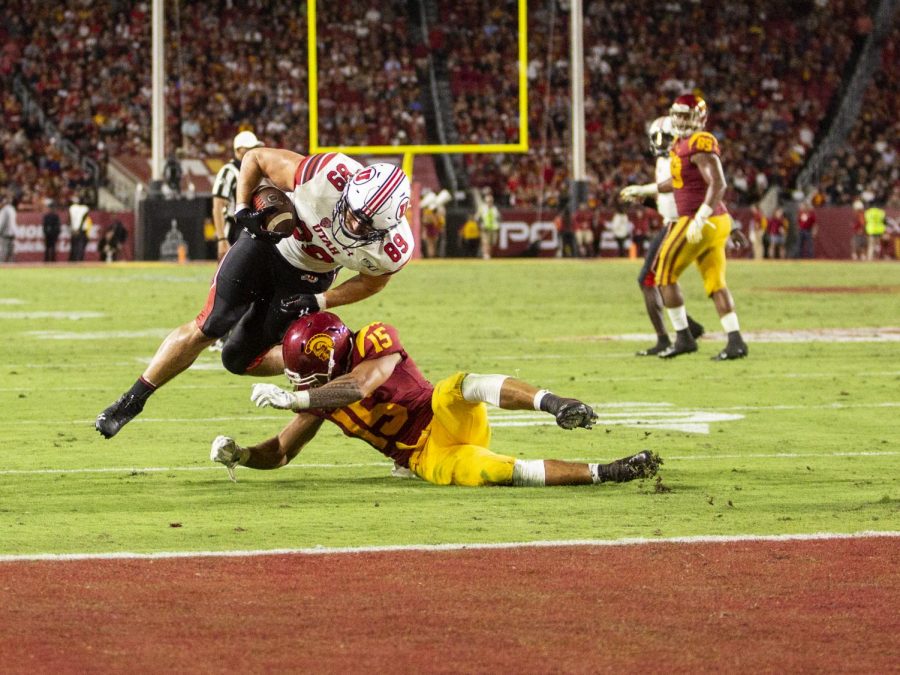 University of Utah sophomore tight end Cole Fotheringham (89) goes for more yards up after bringing down a pass from quarterback Tyler Huntley (1) in a NCAA football game at the LA Memorial Coliseum on Sept. 20, 2019.(Justin Prather | The Daily Utah Chronicle).

The University of Utah football team is headed into this week hoping to finally kick off their abbreviated 2020 season as they are scheduled to take on No. 20 USC at Rice-Eccles Stadium this coming Saturday, Nov. 21. The biggest question on everyone’s mind is undoubtedly, will the third time finally be the charm for the Utes?

For the second week in a row, the Utah football team had their game cancelled 24 hours before kickoff. Things were looking up for the team at the beginning of the week, but one positive test on Friday morning ultimately caused the cancelation of the game.

Even after having two games pulled out from beneath them, the team is remaining positive and focused to take on one of their Pac-12 foes this weekend.

“That is all you can do. You can’t stress about what you can’t control. What you can control is your effort and what you put into practice every day. It is about showing up,” wide receiver Solomon Enis said. “At the end of the day, it hurts, especially the day before the game and it gets cancelled, but you come into the next week and you work the same way you did before, and you hope it works out the rest of the week.”

With having several games cancelled, mental health has become a big focus for the team in such a crazy year for sports.

Hear it from Coach:
“You might expect the players’ spirits to be a little down because of the disappointment the last couple of weeks, but that is not the case. They are eager and ready to go. Like I said, we had a very productive practice yesterday and we will get back out on the field today. Things are trending in the right direction for us as far as getting back to health and getting guys back out on the practice field. Right now, all of our efforts are geared toward getting ready for USC and we will hopefully be kicking off on Saturday night at 8:30 p.m. on ESPN, national television. We are excited about that opportunity,” head coach Kyle Whittingham said in his weekly presser.

Scouting the Trojans:
Ranking: No. 20

The Trojans moved to 2-0 on the season after a last-second victory over Arizona this past week. USC seems to be making a habit of these come from behind victories in the final seconds of the game, as they did the same thing against ASU the previous week.

Kedon Slovis led the team under-center passing for 325 yards and didn’t throw a single interception. He also went 30-43 on passes and found Erik Krommenhoek in the end zone for a touchdown.

Amon-Ra St. Brown led the team in receptions with seven. He totaled 116 yards, but no touchdowns.

USC running backs Markese Stepp, Stephen Carr and Vavae Malepeai all scored for the team in the victory. Stepp led the team with 82 yards.

How to watch:
This week’s game is scheduled for an 8:30 p.m. MST kickoff. The game will be broadcasted on ESPN with Dave Flemming, Rod Gilmore and Stormy Buonantony on the call. Fans can also listen to the game on the Home of the Utes, ESPN700 with Bill Riley and Scott Mitchell.