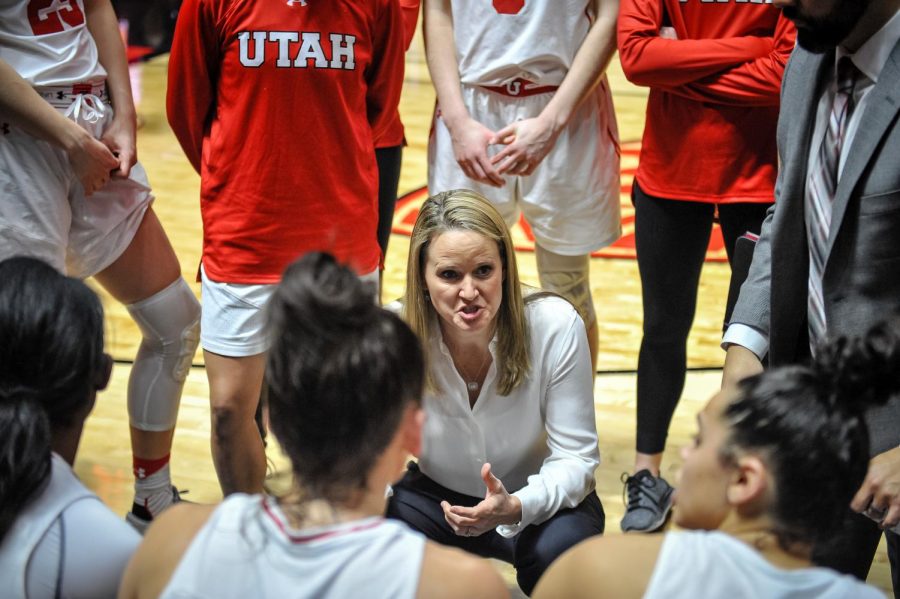 In the final moments of the game Utah Head Coach Lynne Roberts gives her plan for a comeback as The University of Utah Lady Utes take on the University of Oregon Ducks at the Huntsman Center in Salt Lake City, UT on Sunday, Jan. 28, 2018(Photo by Adam Fondren | Daily Utah Chronicle)

The following is a collection of notes and musings from Pac-12 Women’s basketball media day. For more complete roster break downs, player quotes and team previews check out the following stories here and here.

Media day in the Pac-12 cemented two things: One, this season will be much different than any season on record. Two, the Pac-12 is the best conference in women’s college basketball according to its coaches.

“I agree with Coach [Kelly] Graves, we have a really good conference right now, probably best in the nation. I think the schedule will showcase that.” Utah head coach Lynne Roberts said.

So what makes this the case? First off recruiting, six Pac-12 schools ranked in the top 25 of recruiting based on a September ESPN ranking.

Not included amongst those schools were Oregon and Utah, though during their press times both were mentioned by moderator Ros Gold Onwude as having two top 20 recruiting classes. Oregon was mentioned as the number one freshman class coming in, and Utah with the number 20 freshman class.

The Pac-12 also dominates the current AP preseason top 25. Stanford, the league favorite, comes in ranked number two in the nation. Arizona (7), UCLA (9) and Oregon (10) round out the Pac-12’s top ten teams.

Oregon State clocks in at No. 18 in the rankings. The league is as deep as they come when it comes to great programs and young talent. Utah is very much a bottom third team. Even coach Roberts acknowledged this at media day.

Roberts also added that playing all Pac-12 teams twice would give her team a shot to showcase itself. So how does the media believe Utah will fair within the Pac-12? Well, to answer that, let’s look at the all-conference team and the preseason media poll.

This is a top-heavy league. The top six teams in that poll should be locked to make the NCAA tournament at the end of the season.

The Pac-12 will likely be a seven-bid league on the women’s side of college basketball.  Arizona State, Colorado and Cal will all be battling with Utah for that final spot one would imagine.

Nominated Utes:
Returning sophomore guard Brynna Maxwell was the only Ute nominated to the Pac-12 all-conference team. Maxwell averaged 13 points, three rebounds and one assist per game in 2019. She also averaged nearly one steal per game, registering at 0.6 per game officially.

Dru Gylten also received votes to be on the all-conference team. Maxwell has been nominated to be on the watch list for the Ann Meyers Drysdale Award, which is given to the top shooting guard in the nation. Gylten was named to the Nancy Lieberman Award Watch List earlier this month. She is one of 20 point guards who are up for the national award.

Remaining questions before the season opener:
Who will Utah’s center be?

While I can grasp most of the starting five for the Utes, Gylten and Maxwell at guard, Lola Pendande and Andrea Torres at forward it baffles me what the plan will be at center. Utah has one designated center in Maurane Corbin, but also has senior transfer Zuzanna Puc. Puc, who doesn’t really fit in at center at 6’2 while Corbin fills out at 6’5. Still, I cannot help but be fascinated with the role Puc plays on the team. She has the experience to be a starter, but would she really replace Torres? Only time will tell on this one, but it’s something to keep an eye on.

What is Kennady McQueen’s role?

Coach Roberts has continually hyped up her freshman guard throughout camp. Raving about her skills and how fun she is to coach. In her opening press availability of the season, she told reporters that McQueen will play this year. The question is where and how much. McQueen is more of an on-ball point guard, so you would imagine she would force Gylten to come off the court. I would imagine McQueen comes in as a sixth woman off the bench quite a bit. It also wouldn’t shock me if she starts in one of the two non-conference games the Utes play.

Will the Utes play on time?

The state of Utah is currently posting three thousand COVID-19 cases per day at this point. AD Mark Harlan has confirmed both the football team and men’s basketball team have had positive cases. No reported cases on the women’s team have come to light. The fact is, as coach Roberts has said throughout her availability, you simply cannot control what this virus does. The team will have to remain flexible. The virus will get to every sport eventually. All we can do is remain flexible, wear masks, socially distance and hope the Utes take the floor on Nov. 25 to host Southern Utah.