Saifee: Deb Haaland is the Transformative Leader We Need 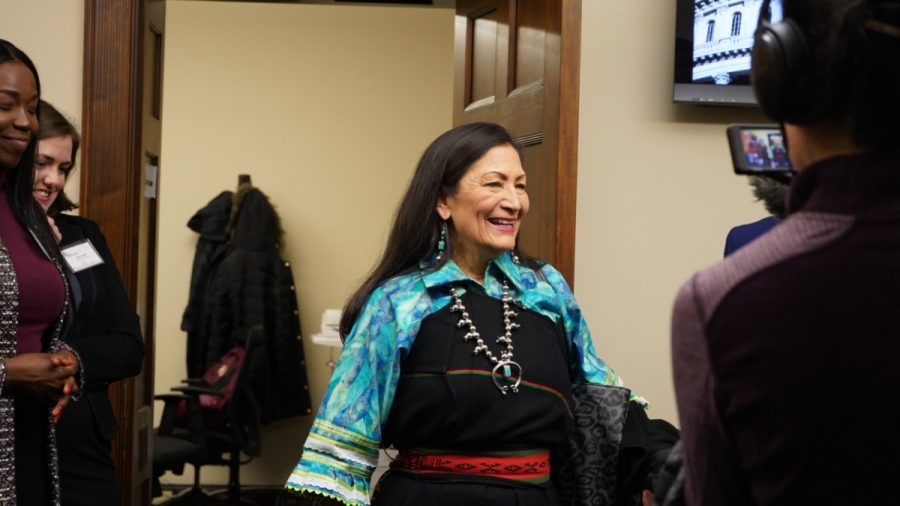 “Climate change is the challenge of our lifetime,” said Rep. Deb Haaland, Biden’s nominee for Secretary of the Interior Department. A welcome change, as the past four years have been dominated by Trump’s anti-climate rhetoric and actions. Haaland has voiced her strong objections to Trump’s actions and has been a fierce advocate for the planet.

Haaland also brings a new identity to the Interior Department — she is a Native American woman and member of the Pueblo of Laguna. Her previous experience makes her an ideal candidate to tackle climate change and issues related to Native Americans. The Biden-Harris team stated, “Haaland is a barrier-breaking public servant who has spent her career fighting for families, including in Tribal Nations, rural communities, and communities of color.” Haaland is exactly the type of leader that Utah, and America, needs. Her leadership will address the urgency of climate change and mend the relationship between the government and Indigenous peoples.

If confirmed, Haaland will lead the Interior Department, which oversees public lands, national parks, oil and drilling sites and the conservation of endangered species. She will play a significant part in the Biden-Harris climate-action agenda. The agenda is the most progressive climate action we’ve seen proposed. Biden aims to create a carbon-neutral power sector by 2035 and net-zero emissions by 2050 while incorporating sustainable infrastructure and union jobs. This is no small task.

During Trump’s “energy dominance” presidency, millions of acres have been opened up to drilling, which has endangered wild spaces and sacred sites. The current head of the Interior Department, David Bernhardt, was once a fossil fuel lobbyist. However, with Haaland at the head of the Interior Department, she will dismantle the oil, coal and gas frenzy that has been propagated by the Trump administration. She has promised to halt all new oil and gas drilling on public lands and significantly reduce current drilling.

Haaland is intimately informed on the oil and gas industry as one of New Mexico’s representatives — a top oil-producing state. Her experience as a policymaker in a fossil fuel backed state will serve her well, as she realizes that many communities are dependent on the oil and gas industry for income. As she plans to reduce fossil fuel usage, she will also implement a “just transition” to renewable energy.

The Interior Department has had a rocky relationship with the 574 federally recognized Native American tribes. After many Tribal leaders urged Biden to nominate Haaland for the role, her nomination means that Indigenous people will finally have executive representation in the federal government. Haaland acts as representation, hope and the beginning of reparations for Indigenous people as the Interior Department oversees the “Bureau of Indian Affairs, the Bureau of Indian Education and the Bureau of Trust Funds Administration, which manages billions held in trust by the U.S. government.” The department also makes decisions in tribes’ health and education funding, which, due to COVID-19, has shown apparent shortcomings.

Four years ago, Haaland took a stand with Native people in the opposition of the Dakota Access pipeline. She specifically asked tribal leaders what support they needed and gave them a platform to voice their concerns. Haaland will continue the same sentiment in the Interior Department — putting Indigenous peoples’ needs at the forefront of her work and hopefully regaining their trust bit by bit.

We are no stranger to natural spaces in Utah. We have five beautiful national parks, seven national monuments, several national forests and as a state, we have a great love for the outdoors. Beyond our love, Utah needs protected lands. Utah has a $12.3 billion outdoor industry and 110,000 jobs that rely on protected public lands. Haaland will protect the outdoors that we cherish and rely upon.

Utahns put up a relentless fight to save Bears Ears and Grand Staircase Escalante, but we ultimately lost. Haaland will reinstate both national monuments to their original boundaries — restoring protection to lands that are sacred to the Ute, Navajo and Hopi tribes and that are essential to ecosystem health. These restorations build upon Biden’s plan to “conserve 30% of America’s lands and waters by 2030.” Utahns can encourage Senators Lee and Romney to confirm Haaland as the Interior Department secretary by writing and calling their respective offices.