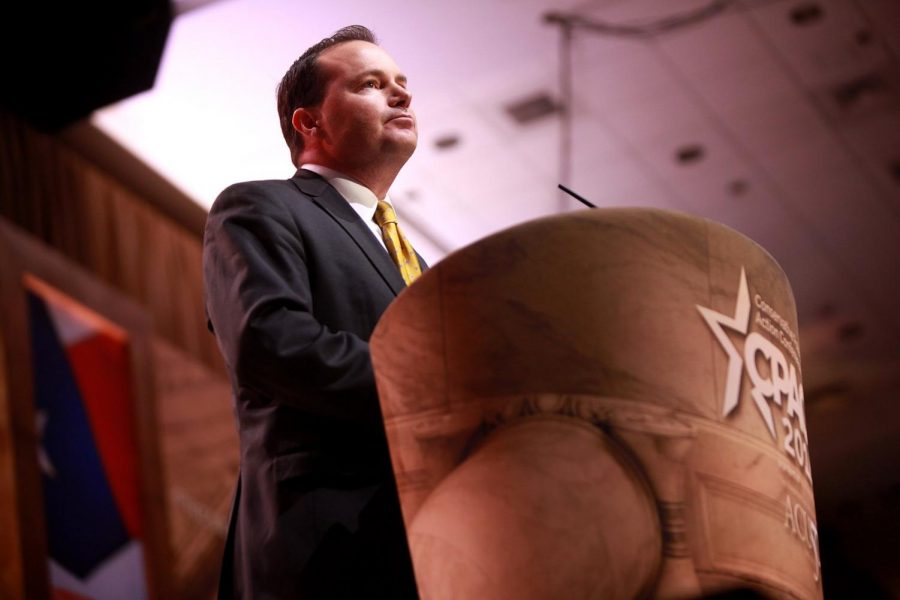 While browsing my Twitter feed recently, I happened upon #HumansAgainstMikeLee, a tag full of tweets expressing frustration with Utah Sen. Mike Lee. Though I consider myself well-informed about Utah politics, I discovered news about and quotes from Lee that prompted me to seriously consider who represents me. Lee has a history of spreading ignorance, ignoring the values of his constituency and acting out of partisanship. After re-examining his history as our senator, I know I will never cast my ballot for Lee.
Ignorance
Lee is one of Utah’s six federal representatives, a position that demands responsibility and integrity. Instead, Lee has repeatedly said and done ignorant things, even spreading falsehoods that could directly harm Utahns. Speaking about the climate crisis, a serious public health problem as we move forward, Lee has said that “the solution to climate change is… to fall in love, get married, and have some kids.” I can respect politicians who disagree with me, even on issues I take seriously, but I have a hard time respecting politicians who cannot provide a meaningful answer about how they would use their platform to address these kinds of pressing problems.

Lee’s careless attitude about mask-wearing during the COVID-19 pandemic also spreads a dangerous message to Utahns, implying that masks are optional and that disease is not a serious threat. Meanwhile, Utah hospitals are struggling to bear the burden of the coronavirus, with 85% of hospital beds full. Lee has been seen maskless at a number of events, even within two weeks of testing positive for the virus. As our senator, Lee has an obligation to send accurate, helpful messages about public safety to his constituents, but he will not even observe the safety protocols established by public health organizations. That kind of carelessness makes Utah look bad to the rest of the country and sets a bad example for Utahns, many of whom are already reluctant to mask up.
Poor Representation
Utah is widely known as a religious, deep red state — but from the inside, things aren’t so cut and dry. We are a conservative state that has fought for the rights of immigrants and stood up for the LGBTQ community. While 54% of adults in Utah are Republican, 30% lean left or self-identify as Democrats. There’s even variation among Utah Republicans, with many struggling to support Donald Trump. This isn’t a strictly heterogeneous state, but a community with diverse opinions and a lot of compassion.

Looking at Utah from that perspective, it is hard to understand why Lee chooses to represent us the way he does. He has failed time and time again to exemplify the compassionate conservatism Utah is known for. Recently, for example, Lee was the lone vote against a bill that intended to get disability benefits to those suffering from ALS more quickly. He made headlines when he blocked legislation that would have established Smithsonian museums for Latinos and women. Despite broad support for more stimulus checks, with 70% of Americans in favor, Lee was one of only six senators to vote against the COVID-19 relief bill that would have provided more stimulus money to his constituents.

As one of our state’s two senators, Lee’s job is to represent all of Utah, from blue Salt Lake to red Utah County. Despite this, he consistently uses his voice in the Senate to vote in the spirit of the Republican party — and, worse, of Trumpism and self-interest — rather than in the spirit of Utahns.
The Worst Example of Partisanship
What I find most offensive about Lee, however, is his hypocrisy. When he blocked the bill that would have created Smithsonian museums for groups whose histories have been widely ignored, he justified it by saying that he did not want to “further divide an already divided nation.” But telling the histories of two marginalized groups is not divisive. It is divisive to vote against this and other bills with widespread bipartisan support, including the COVID-19 relief bill in favor of siding with the president. It is divisive to defend the president’s baseless election fraud claims and undermine our nation’s electoral system because your candidate lost. It is incredibly frustrating to see compassion and bipartisanship in our community and then to watch one of our senators consistently use the platform Utahns gave him to further the divisions within our nation and state.

I don’t hate Lee for being more conservative than I am. I am frustrated at the lack of integrity he has demonstrated while representing me and my state. He is a bad example to Utahns and a poor reflection to the rest of the country of what Utah stands for. After everything he’s done in his ten years as our senator, there is nothing he could do to win my vote.