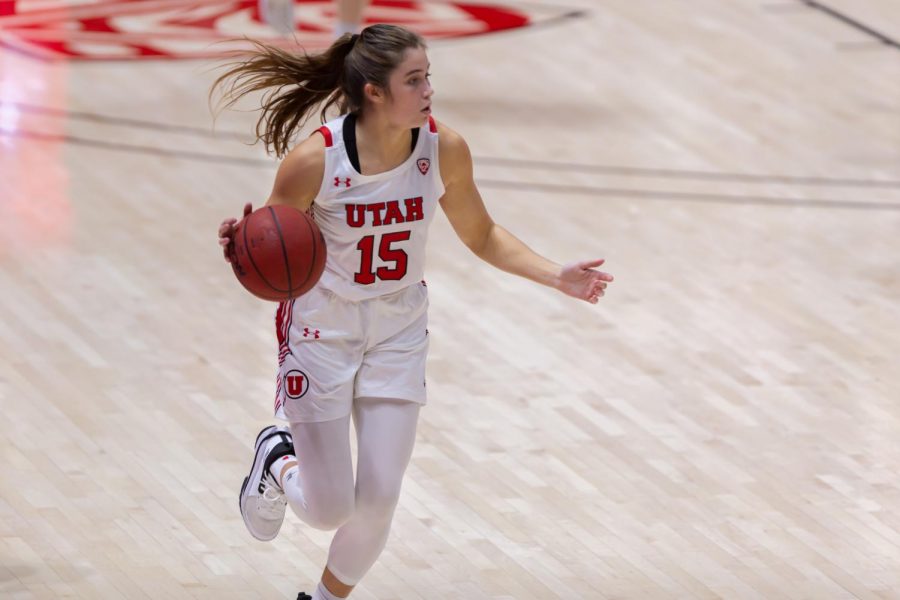 University of Utah women's basketball player, KEMERY MARTÍN (#15), brings the ball down the court in the game against Montana State University on Dec. 11, 2020 in the Jon M. Huntsman Center in Salt Lake City. (Photo by Jack Gambassi | The Daily Utah Chronicle)

The Utah Utes had hoped to open the year of 2021 with a win, but a late fouling breakdown allowed the Washington State Cougars to escape with a 79-74 win over the Utes.

Though pleased with her team’s effort, which is certainly not the issue for these Utes, head coach Lynne Roberts thought her team needed to slow down the turnovers.

“We need to stop the turnovers, we got it under control in the second half but I thought we had a bad third quarter. The start of the third quarter crushed us.” Roberts said.

The Utes shot 47% from the field, but continued to struggle from beyond the arc as they shot a poor 32% from three, which is an issue seeing that almost half of Utah’s 58 shots came from deep.

Roberts mentioned in her post-game comments that not having Peyton McFarland really hurt the team. She did not expand though and there is no official comment from Utah on why that was. It is nothing better than speculation but a mid game injury could have been in play as McFarland took an awkward fall in the first quarter.

Utah responded well to big deficits in the game. At one point down by 17, the Utes ability to fight back made for an encouraging takeaway on a disappointing day.

“Well we get in holes, we can finish a game if we’re down by eight, but we get in these double digit holes and it is like somebody throws water in our face and we scrap back….” Roberts said, trailing off.

It is still early, we are just about a quarter of the way through this Utah season, but the facts are this: Utah has lost four straight and looked like the worse ball team in all but one game.

Brynna Maxwell has struggled to find space, scoring 12 points on only six shots. With that said she is still an incredibly talented shooter who, if she finds more open looks, can live up to the billing of an all Pac-12 team. Kemery Martín and Andrea Torres also put up good numbers, scoring 10 and 14 respectively. Kennady McQueen had 11 points.

Roberts believes in her team wholeheartedly. They have not been outclassed by anyone except perhaps Oregon, shots just need to start falling for this team, and turnovers need to stop. There is after all, a lot of season left.

First quarter: The first quarter ends with Utah in a dog fight. A 20-20 back-and-forth game that has seen both teams play at break-net paces offensively.

Kemery Martín finishes the first quarter with five points. Andrea Torres behind her with four and an impressive steal that led to a layup.

Second quarter: The Utes ended the half down 44-38. You can’t escape these games without looking at the box score and seeing the three point numbers for Utah. 4-11 in the first half, which basically matches the season average of 36%. It is a real issue, the shots seem to be there, they aren’t heavily contested, the shooting motions of these players don’t look broken they simply are not falling.

Head coach Lynne Roberts looks increasingly frustrated at her team mainly when the ball gets turned over, which has happened a lot this year. Slamming her water bottle to the ground after the team’s 11 first half turnovers.

Those turnovers are a problem as the Cougars scored 15 points off of them.

There are positives to take away though, like the fact it seems the freshman set the tone on this team. Kennady McQueen and Peyton McFarland are fearless and that translates to the rest of the team. McQueen shot the ball well in the first half going 2-2 and finished with five points.

Andrea Torres lead the team going into half with nine points, followed by Kemery Martín with seven. The rebound numbers looked good for the Utes going into the second half, 14-13 in favor of Washington State. They aren’t on pace for the 40’s where the Utes resided in the first few games of the season, but they are good numbers and not a real detriment to the team.

The Utes finish the third shooting 5-15 from three. The turnovers were not an issue for Utah in the third, only giving the ball up two times.

The Utes had a hard time controlling Charlisse Leger-Walker, who scored 16 points through the three quarters against the Utes.

Bella Murekatete finished the third with 14 points as the Utes had a difficult time controlling the paint in the third.

Fourth quarter: The Utes start the fourth off with two quick three-point plays to cut the lead down to eight. A beautiful Niyah Becker pass sets up a Brynna Maxwell and-one play that cuts the lead down to seven for the Cougars after a Washington State run. At the under five mark the Utes trail by nine points.

An observation: Brynna Maxwell is having a hard time getting open. The physicality of teams has really gotten to her over the past month as pointed out by Coach Roberts several times. With that said she is still shooting well.

A Maxwell double-team turns into a turnover and suddenly a 12-point lead for the Cougars with three minutes left to play, moving Utah’s turnover number on the day to 16.

Andrea Torres drove to the basket and hit a layup with 46 seconds left in the game to make it a six-point contest, the closest the Utes have been since the end of the second quarter.

Brynna Maxwell is fouled while shooting a three. All three shots fall and the lead is cut to three with ten seconds left.

Then disaster. The Utes don’t foul quick enough and allow the Cougars to advance the ball past half court and foul with four seconds left. Cherilyn Molina proceeds to nail two free throws and give the Cougs a five point lead with four seconds left, the nail in the coffin as the Utes fall by five.

Utah plays Washington on Sunday, January 3 at 2 p.m. MT. You can listen to that game on ESPN 700 and watch on Pac-12 networks.