Weglinski: The U Owes Us a Safer Campus 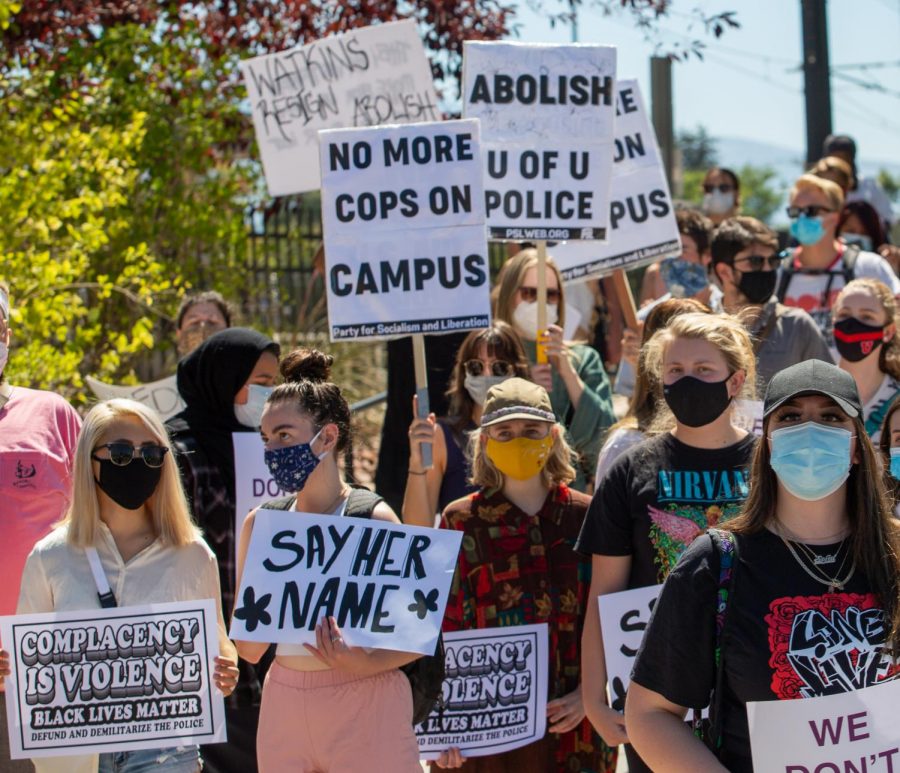 Protesters march to the John R. Park Building on University of Utah campus on Sept. 3, 2020. (The Daily Utah Chronicle)

The University of Utah recently released the 2020 campus safety report. This annual report is meant to offer transparency and standardized data on campus crime to the public. This year’s findings — based on 2019 data — showed an increase in rape, dating violence and stalking in our community compared to past years. In fact, student-run advocacy group UnsafeU calculated that stalking incidents rose by a whopping 106% and rape cases by 67% between 2018 and 2019.

While these numbers are heartbreaking, they’re not surprising for those of us who have either experienced negligible treatment from the University of Utah Police Department or feel generally unsafe stepping foot on campus — especially after stories like the administrative mishandling of Lauren McCluskey’s case come out. Trust in our school administration’s response and handling is so low that only a handful of U students report their sexual assault or misconduct to university officials; many fear their case won’t be taken seriously. Likewise, when asked in the 2020 campus climate survey if the University of Utah does enough to keep students safe, students gave an average answer of 2.4 where 1 indicated “strongly disagree” and 5 meant “strongly agree.”

Students’ trust in university leadership has significantly declined — and justifiably so. As reports of stalking and rapes have increased, the U needs to be more transparent with students and offer more targeted resources for sexual assault victim-survivors in addition to campus-wide preventative measures.

Beyond analyzing data from this year’s safety report, UnsafeU criticized its writers’ failure to disaggregate the data by location. 20 rapes were reported in 2019, but because the report didn’t differentiate where these assaults took place, students don’t know which areas may be higher risk. This is unacceptable. If university administration wants students to feel safe on campus and prevent sexual misconduct and violence, these safety reports need to be comprehensive. As U student Sam Huston said, “Not disaggregating data is almost, if not just, as bad as not collecting data at all.”

On top of that, there has been no additional funding towards campus victim-survivor services even after rising reports of assault. According to UnsafeU, there are no targeted resources at the university for these individuals, and preventative measures to combat these specific forms of harassment — like stalking — are minimal. Instead of allocating money to the campus police department, which is notorious for brushing off cases and failing women at the U, the university needs to redirect those funds to effective sexual assault resources and services.

As a student who lives on campus at the U, I’ve heard so many stories of sexual harassment that it’s become disgustingly normalized. When we step back and remind ourselves that sexual violence is not normal, though, these stories simply expose the university’s poor accountability standards. Our sense of safety (or lack thereof) on campus can only change if our school leaders are willing to put students’ needs first and implement substantive policy changes. Similarly, the U can’t expect students to trust them when they aren’t trusting our stories. If something happened to me as a student, I would want to have complete faith in university officials to handle my case as thoroughly and sympathetically as possible, and not to worry about whether I will be taken seriously.

The U’s administration has made progress toward a safer campus in the wake of McCluskey’s case, including through the creation of two new public safety committees — but we should expect these changes, not praise them. It should not take a student’s death or a safety report to prompt common-sense safety measures. As UnsafeU has said in a statement, “We refuse to reward the university for doing less than the bare minimum… [This] must be seen as a floor, not a ceiling.”

It’s the U’s duty to offer us a safe environment. With the increasing sexual misconduct happening in our community, our university administration needs to step up and put additional money toward sexual assault resources and be more up front with students. Not one student at the U should feel unsafe pursuing their education.