Utes Lose Heartbreaker At The Buzzer Against USC Trojans 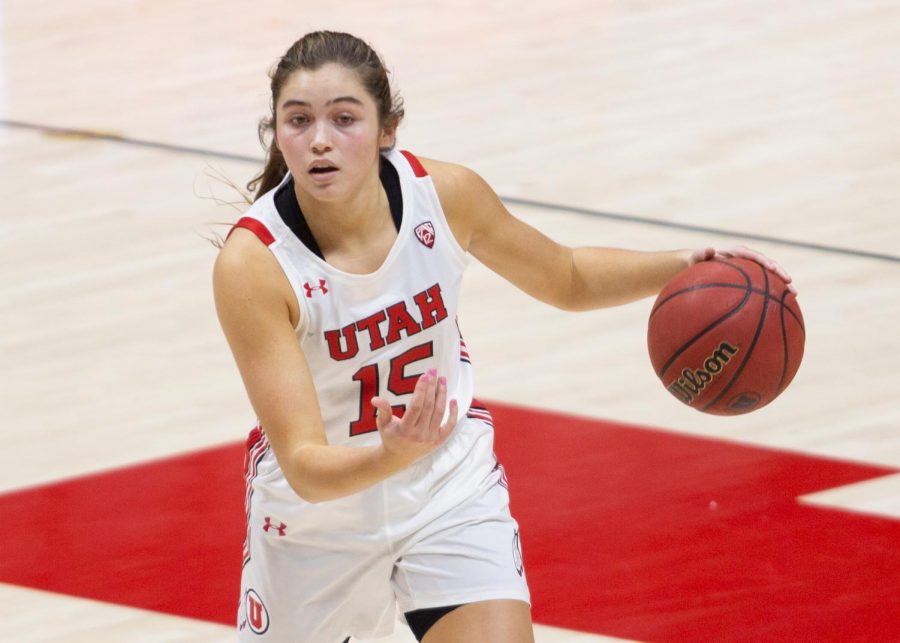 University of Utah women's basketball player, Kemery Martin (#15), looks for her teammate to change position in the game against the University of Arizona in the Jon M. Huntsman center in Salt Lake City on Dec. 20, 2020. (Photo by Jack Gambassi | The Daily Utah Chronicle)

The Utah Utes opened their California road trip with a loss to the University of Southern California Trojans 60-59. A tough loss for Utah as Brynna Maxwell’s last-second shot fell short after a brilliantly executed play to get her wide open at the buzzer.

Maxwell’s miss came despite a terrific performance from her on the night — one that saw her score 20 points and post two rebounds along with three assists. One of her best nights of the season thus far, though two crucial missed shots in the third will end up being the story.

Utah, after starting hot, fell back to their season average of 35 percent from three against USC, though the shooting was much improved compared to recent performances in which the Utes have struggled.

The Utes were able to stop runs for most of the game. In the fourth quarter, however, the team gave up a 10-0 run that would eventually lead to the loss. While Utah is improving at stopping the bleeding, the trend continues to be that when things go poorly for the Utes they tend to go very poorly.

The rebounding numbers broke just about even in this game. Utah was outrebounded 32-31. The Utes limited turnovers, only having the ball stolen away from them 9 times. While still a high number, it is much improved from earlier performances in the season. The Utes posted 11 takeaways from their own and continue to be one of the best teams in the Pac-12 at forcing turnovers.

USC was led in scoring by Endyia Rogers and Jordan Sanders, who finished the night with 17 and 14 points, respectively. Angel Jackson also scored 12 points. The stars for the Trojans showed up and were too much for the Utes to handle, especially in the paint where Utah gave up nearly half of the points USC scored (26).
10 Minute Report
First-quarter: The Utes started strong from three-point land as they went 3-7 in the first quarter, though cooling down and going 0-3 in the final four minutes of the quarter. The USC Trojans had a good time shooting as well in the first quarter, going 8-13 from the floor.

Brynna Maxwell started hot, making a number of incredibly difficult three-point shots with defenders draped all over her. Maxwell finished the first quarter with 13 of the Ute’s 21 first-quarter points.

Second-quarter: The Utes lead 37-36 at half time against the Trojans. The story of the past month for Utah has been a lack of three-point shooting. That simply was not the case in the first half. The Utes shot a blistering 50 percent from three, hitting five deep shots in the process.

The Trojans shot the ball well also, 52 percent from the field but only two three-point shots.

Utah was led in scoring by Brynna Maxwell, but Dru Gylten also contributed with nine points and Kemery Martín added four. All in all, eight Utes scored in the first half and five of them scored three or more points.

The Utes defense got too relaxed at points in the second quarter, allowing some easy baskets for the Trojans who scored 14 points in the painted area. Peyton McFarland evenly split floor time with fellow freshman Kelsey Rees. Both had blocks in the first half, but on one or two occasions each of them got beat to the basket by USC players.

The Utes only had the ball stolen from them six times in the first half, a massive improvement on recent performances. Overall, this looked like one of the more complete offensive halves of basketball Utah has played this season.

Third-quarter: The Utes ended the third quarter up by a score of 50-47. Another problem the Utes have faced this year has been struggling to stop runs. That wasn’t the case in a back-and-forth third quarter, filled with small runs that the Utes were ultimately able to stop and reply to.

The Utes were out-rebounded 13-9 in the third quarter, but improved paint defense kept the game from getting away.

Maxwell and Gylten combined for nine points in the third.

Fourth-quarter: A 60-55 lead for the Trojans, with three minutes left in the game. Gylten heads to the line after a foul by USC and cuts the lead down to three points at 60-57. After a steal by Gylten, a Niyah Becker layup makes it a one-point game with two minutes remaining. Lola Pendande fouls out with a minute left for an illegal screen.

Brynna Maxwell was visibly upset when her floater shot with thirty-four seconds left came up just short of the basket.

USC misses a three, Niyah Becker rebounds, and Utah takes a timeout. With two seconds left, the game is on the line, 60-59. Brynna Maxwell received the pass, stepped past a USC defender and missed the shot, ending the game.

Stat of the game: USC’s 26 points in the paint ended up being the difference in this one. Despite very good perimeter defense by the Utes, the Trojans were able to get into the painted area and score against Utah.
What Is Next?
Utah takes on UCLA on Sunday at 2 p.m. MST. You can listen on ESPN 700 or watch on the Pac-12 networks.