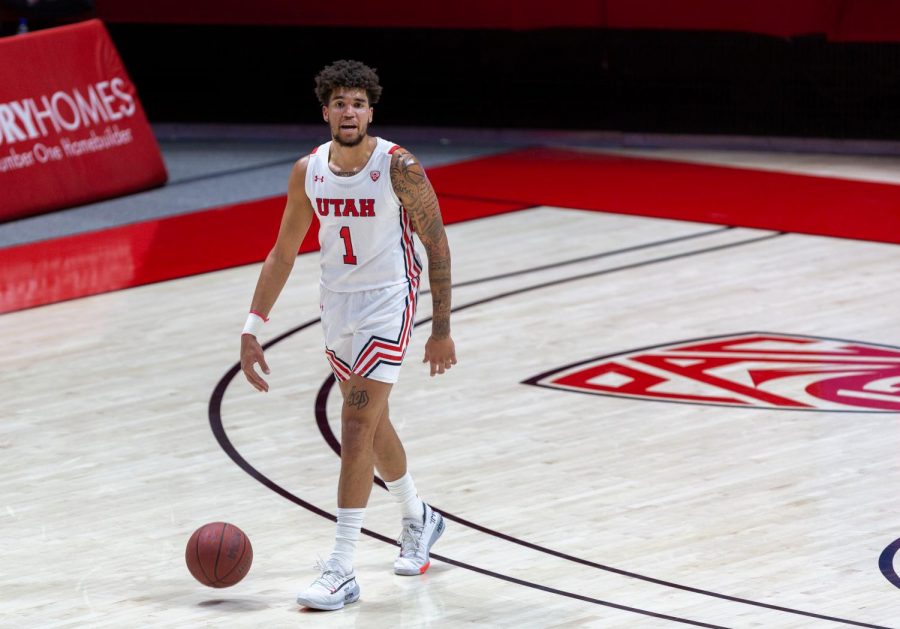 Despite a 10-point lead at half fueled by 17 from Timmy Allen, the Runnin’ Utes lose a close one to No. 17 Oregon, 79-73
First Half
After two disappointing losses in a row, the Runnin’ Utes were unrecognizable in the first half as they dominated the No. 17 Oregon Ducks. Oregon started the game 1-5 and Utah jumped out to a quick 9-2 lead. Pelle Larsson was stellar to begin the game, knocking down two three-pointers and helped lead Utah to a 12-4 lead through the first five minutes.

But the Ducks were ranked No. 17 for a reason as they would go on a 17-8 run thanks to their full-court-press and quite a few three’s. In fact, the only thing that kept Oregon in the game was their stellar three-point shooting. They were only 36% from the field through the first half (12-33)  but were 43% from 3-point range (6-14).

However, the first half was all about birthday boy Timmy Allen as he was absolutely on fire. Through the first 20 minutes Allen had 17 points and was 8-10 from the floor. Oregon couldn’t stop him no matter who was playing defense and he let them know. After his seventh bucket Allen turned to the Oregon bench and let them know it was his night.

Over the final few minutes of the first half Utah hit eight shots in a row and put together an 11-0 run in a very short span. The Utes took a 43-33 lead into the half as Mikael Jantunen beat the buzzer on a tough layup.
Second Half
To think Oregon was just going roll over and let this one go however, incredibly foolish. The Ducks started with a 17-5 run through the first few minutes as the Utes continued to turn the ball over. Oregon’s defense was suffocating and the game plan was simple, don’t let Allen shoot.

Allen cooled off significantly and was just 1-3 from the field with only six points. Oregon was constantly double-teaming Allen and on several occasions even triple-teamed him to ensure he wouldn’t scorch them again in the second half.

As a whole, the Utes cooled off as they only shot 44% from the field (11-25) and 20% from three-point range (2-10). Oregon outscored Utah 46-30 in the second half as they completely changed their strategy and focused more on inside scoring rather than outside. The Ducks put up 20 points in the paint opposed to just eight in the first half.

The game was very much back and forth to finish as the teams were just exchanging blows. But a nearly three minute drought put Utah in a seven-point hole of which they would never recover. Despite several charges taken by Rylan Jones and a highlight alley oop slam from Jones to Brandon Carlson, the Utes couldn’t complete the comeback and fell to Oregon, 79-73.

“We struggled coming out at half time,” Head Coach Larry Krystkowiak said. “They came out, we had a few passes that we didn’t meet that were picked off. Uh, ya know, too many turnovers and we are gonna have to clean it up. I thought we responded once we did get punched in the mouth to start the second half, ya know, it was a back-n-forth game all the way through the ending.”
Performance of the Game
Despite the loss, Timmy Allen was the best for Utah tonight as he scored a team-high 23 points on 9-13 from the field. Allen was incredibly aggressive through the first half as he scored several buckets at the rim over bigger defenders, hit a few jumpers and also splashed one home from deep.

Allen also reached a milestone tonight as he became the 40th player in school history to score 1000 points.
Notable Performances
Freshman Pelle Larsson had arguably his best performance of the season as he finished with 15 points on 5-8 shooting, 5 rebounds and 5 assists. Notably, he was also the only Ute to finish with a positive plus/minus as ended the night +3 on the floor.

Mikael Jantunen had a career night as he was the only other Ute to score 20+ points and finished with 20 on 8-14 shooting and added seven rebounds as well. With Allen being smothered, Jantunen’s shots were huge as they kept Utah in the game and often came when the Utes desperately needed a bucket.

“It was all thanks to my teammates,” Jantunen said. “They found me in places and I just had to make the shot. It wasn’t that hard. My teammates gave me great looks and good passes and that’s it. I couldn’t have done it without my teammates.”
Notable Statistic
The elephant in the room for Utah tonight was the amount of turnovers the team committed against the Ducks. Utah finished with 18 turnovers to Oregon’s seven, committing a turnover on 26.5% of their possessions. Oregon also greatly benefitted from Utah’s turnovers as they scored 25 points off of the Utes being so careless with the ball.
A Look Ahead
The Runnin’ Utes will continue their four-game home stand as they host Colorado, Stanford and Cal next week. First up, Colorado will be in town on Monday, Jan. 11 with a tip-off of 4 p.m. MST. The game will be broadcasted on the Pac-12 Network and as always you can also listen to ESPN 700 with Bill Riley on the call.