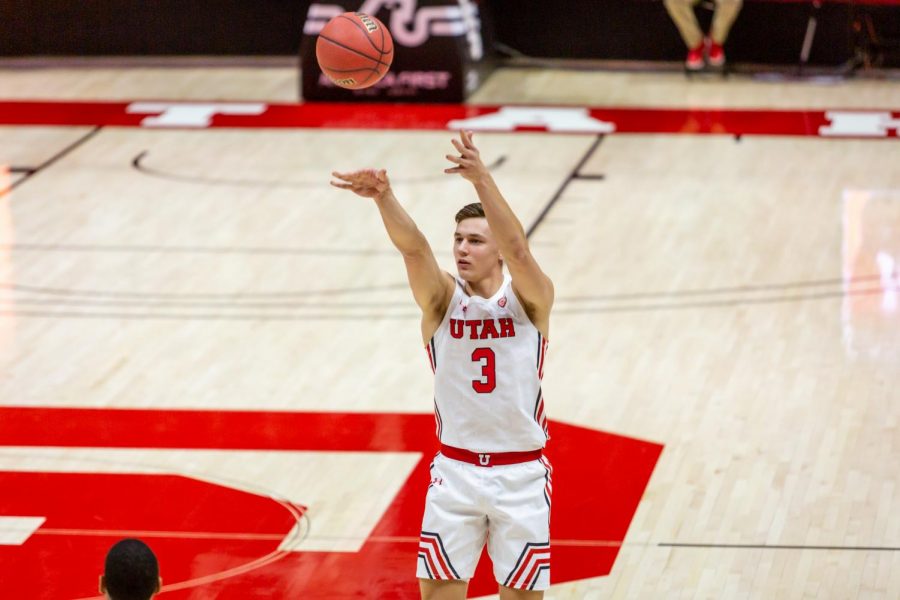 University of Utah Men's Basketball player, Pelle Larsson (#3), takes a 3pt shot in the season-opening game against the University of Washington in the Jon M. Huntsman Center on Dec. 3, 2020. (Photo by Jack Gambassi | The Daily Utah Chronicle)

The University of Utah men’s basketball team dropped another close one on Monday night, taking a 65-58 loss to the University of Colorado Buffaloes.
First Half
The Runnin’ Utes stuck with their changes from Saturday against Oregon, trotting out a new-look starting lineup. Senior Alfonso Plummer and sophomore Branden Carlson are now coming off the bench in favor of junior Riley Battin and freshman Pelle Larsson.

Utah again started the game hot, as they have the past few contests. It was a 12-4 lead early behind some solid defense from the Utes, but Colorado quickly went on a 10-0 run to take the lead.

From there, it was mostly back and forth for a few minutes before the Utes really got things going. Utah used a 13-2 run to take a 33-24 lead with about two minutes left in the half. Freshman Ian Martinez was particularly impressive during this run, with a couple of really nice defensive stops and some quick baskets to go along with it. He’s finding a more consistent role in the rotation over his past few games. The Utes took a 37-27 lead into halftime.
Second Half
The Buffaloes came out of the gates firing after the break, using a 10-0 run in the first four minutes to tie the game at 37. Utah did not score for the first six minutes of the second half. It ended up being a 15-0 run for Colorado.

Utah has had some serious problems after halftime over their last few games. They’ve mostly played well in the first half, but things fall apart early in the second as the other team figures things out offensively. This is becoming a trend now, as their last three games against USC, Oregon, and now Colorado have all had this problem. At the beginning of the season, Utah tended to start games slowly, and now that’s happening at the start of the second rather than the first.

“It was a little bit different. The other night was turnovers, tonight was rebounding,” said head coach Larry Krystkowiak. “That was super costly. Then we were 0-7 in the second half at the free throw line… I don’t know what the good lord has in mind for us this year, but we just played four really good teams.”

Utah recovered well enough to make it a close one the rest of the way. With 2:50 to go, it was 55-52 Colorado as the Buffaloes took a timeout. Ultimately, Colorado simply executed better down the stretch, earning a win, 65-58. Utah’s defense couldn’t hold up and the offense stalled, despite some late attempted heroics by junior Timmy Allen, who finished with 19 points on 9-16 shooting with five rebounds and four assists.

Utah was again out-rebounded, 49-31. Couple that with the slow start in the second half, and it’s a recipe for disaster for the Utes. They have a lot of issues to figure out, and quickly if they want to turn this season around. The Pac-12 is tough and the competition won’t get any easier. Utah falls to 4-5 overall, and just 1-4 in Pac-12 play with this loss.

“I think it’s a variety of issues… If you’re undersized, you gotta get some blockouts… There are times when maybe you’re undersized, but we don’t really have anyone on our team that’s sized for it,” said Coach Krystkowiak on the rebounding issues. “It’s a combination of things, we’re gonna do what we can, but we don’t have a magic pill to get bigger and stronger.”

Allen was optimistic despite the loss, and he seemed motivated to halt the losing streak and start winning these close games.

“People might write us off, or not believe in us, or say we don’t have enough. These last four games, we have been right there, and just let it slip,” said Allen. “We can’t let it happen, man. We’re really right there… I’m definitely not happy with the loss. We didn’t even play great, our defense was good enough to keep us in it… In league play you gotta be tough.”
Looking Ahead
Utah has lost four in a row. They remain on their homestand and will play Stanford on Thursday and California on Saturday. Utah will need to get some wins on the board to stay competitive in the Pac-12. The Utes and Allen are ready for the challenge.

“No one’s gonna feel sorry for us,” Allen said. “Onto the next one.”