No. 3 Red Rocks Fall Short Versus No. 2 Oklahoma 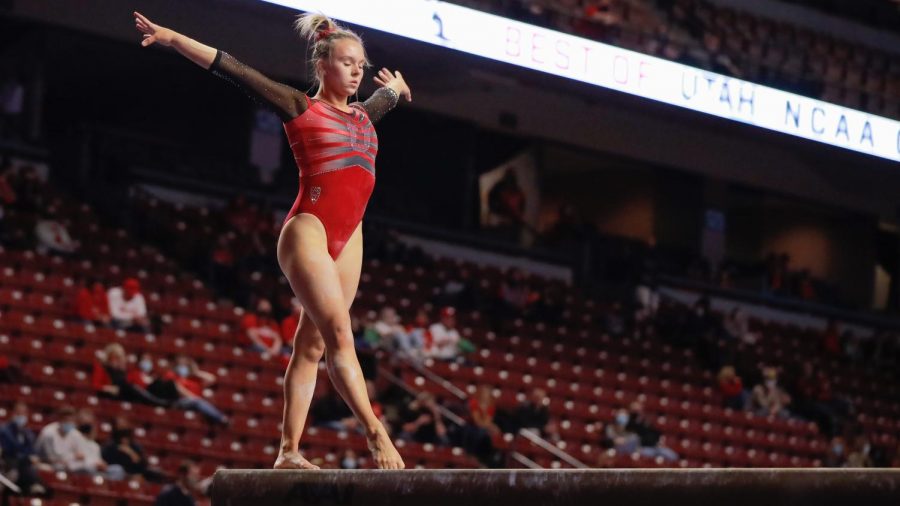 The Utah Red Rocks gymnast and University of Utah sophomore Maile O'Keefe performs on the beam during the Best of Utah NCAA Gymnasitics Meet at Maverick Center, West Valley City on 09 Jan 2021. (Photo by Abu Asib | The Daily Utah Chronicle)

It was a true battle of powerhouses when the No. 3 University of Utah Red Rocks gymnastics team headed to Norman, Oklahoma, to take on the No. 2 Oklahoma Sooners. The Sooners prevailed in the competition 197.025-196.550. The Red Rocks fall to 3-1 on the young season while OU moves to 2-0.

To start the night off, the Red Rocks hit the bars — the only event they were not ranked in the top 10 in the country prior to the meet. The Red Rocks posted a team score of 49.275 on the back of scores of 9.8+ from all the gymnasts in the rotation. OU struggled in their first rotation on vault, which resulted in a slim lead for the Red Rocks headed into the second rotation.

But the wheels started to fall off in the second rotation for the Red Rocks. They were forced to count Cristal Isa’s 9.700 on the event after Alexia Burch fell on her landing, scoring a 9.125.

Somehow the Red Rocks were only down by 0.175 heading into the third rotation. The Red Rocks hit the floor event, the event they were ranked No. 1 in the nation prior to tonight. They posted their highest event scores of the night on this event, on the back of a 9.90 from Sydney Soloski.

Jaylene Gilstrap made her competition debut on the floor and posted a 9.850 on the event.

“During warm-ups, I made the change and made sure that we had Jaylene in there,” said head coach Tom Farden. “In practice, that’s what she does, so it was really refreshing for Jaylene to go out there and do what she does in practice and then do it in the meet. Really refreshing.”

Utah had thinned out the Oklahoma lead even more after the third rotation. The Sooners were only up 0.100 on the Red Rocks. While the beam has been the event Utah has been able to lean on starting last season, nothing seemed to go right for them. Emilie LeBlanc fell off the apparatus from the leadoff position, Burch seemed to almost stop the bleeding after her 9.800 from the second spot.

The biggest questionable score of the night came on Isa’s beam routine. Even after contesting the score post meet, the 9.625 stood. Adrienne Randall posted a 9.875 but the shining moment of the meet came from Maile O’Keefe who scored a 9.950 when the Red Rocks desperately needed it. The comeback was still possible for the Red Rocks, but Abby Paulson scored a 9.725, which couldn’t cut it.

While judging is subjective in gymnastics, the scores across the board for both schools were tight and Farden says they made the mistakes and the judges got them accordingly.

“We didn’t give ourselves the opportunity,” Farden said. “The deductions were there and yeah it’s subjective but I only filled out one inquiry tonight and it was about Cristal’s beam because there was a little bit of an odd range on the final scores. What they had done is one judge had missed a little bit of a connection but they brought it together but still took deduction and it resulted in no change in score.”

O’Keefe did come out on top of the All-Around competition with her score of 39.550. She beat out fellow All-Arounders Anastasia Webb and Ragan Smith for the title.

The future for the Red Rocks is still up in the air, the Pac-12 conference has yet to announce the remainder of the schedule for its member teams, but it was reported earlier this week that the Red Rocks would host Washington on Jan. 30 at the Jon M. Huntsman Center.