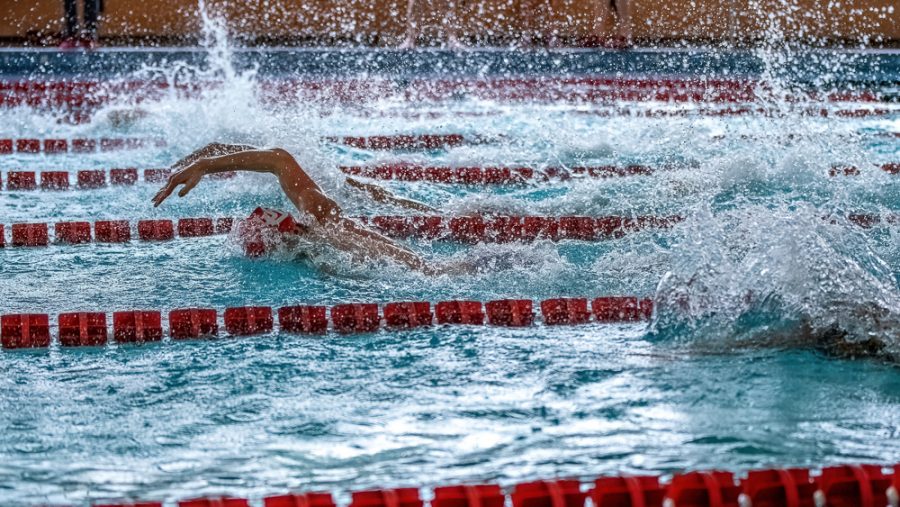 University of Utah Utes Men’s Swimming and Diving Team performs during a dual meet vs. University of Southern California at the Ute Natatoriam in Salt Lake City on Feb. 23, 2020. (Photo by Abu Asib | The Daily Utah Chronicle)

The University of Utah swim and dive teams had their first dual competition with the women’s swim team heading to Pullman, Washington to compete against Washington State while both the men and women’s dive team head to UCLA for an individual competition.
Day 1
On the first day of competition in Pullman, the Utes put the first points on the board with the 200-meter free relay. Emma Boone, Emma Lawless, Maddie Woznik, and Sadie Edwards competed in the 200-meter relay and scored a time of 1:42.2.

The Utes had a strong showing in the 200 freestyle race with Taylor Kabacy, Amber Gardner, and Mandy Gebhart all placing within the top 5. Charity Pittard won the 100 breast race and took second in the 200 breast race. Lawless and Broome took first and second place in the 100m fly race. Reimer won the 200m back and Lawless competed hard to take the win in the 100m fly.

Overall, the Utes had a great first competition for the start of the 2021 season, beating WSU with a score of 140-118.

At the UCLA Invitational, the dive team took some podium spots. Tony Chen took another first place spot in the 3m competition. Chase Hindermarsh and Jenner Pennock both placed within the top 5.

De Cecco placed 2nd in the 3m competition while Mills, Ruchula, and Caulfield placed within the top ten of the event.

The Utah swim and dive teams had a great start to the season. The next event is at home on Jan. 23 where the Utes will host Colorado Mesa.