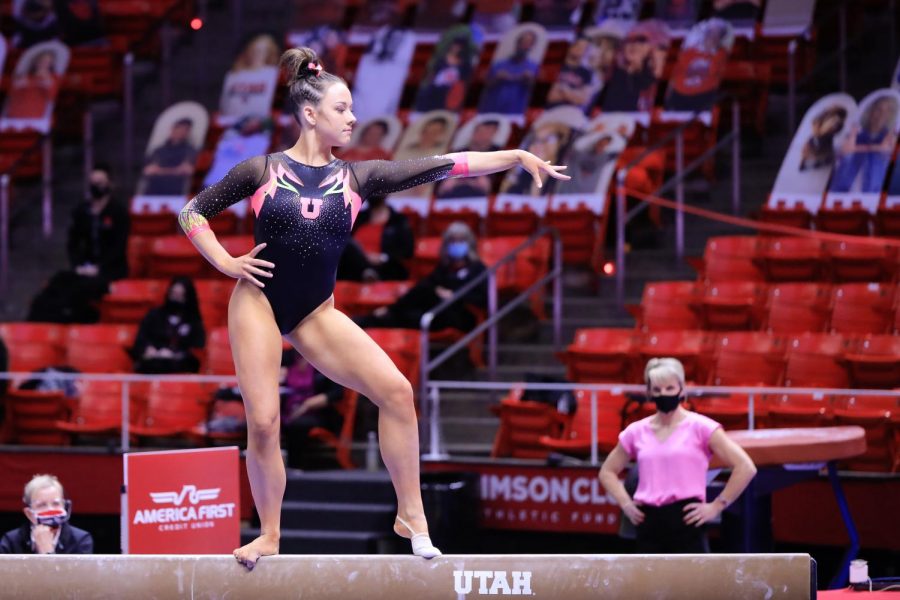 The Utah Red Rocks Gymnast and University of Utah freshman Jaylene Gistrap performs on the floor against the Arizona Wildcats in an NCAA dual meet at Jon M. Huntsman Center in Salt Lake City on 23 Jan 2021. (Photo by Abu Asib | The Daily Utah Chronicle)

After a much needed bounce-back win, the No. 4 University of Utah Red Rocks gymnastics team will continue their 2021 season as they host the University of Washington in the second home meet of the season.

Last year’s meeting between the two schools was the second to last meeting of the season before the remainder was canceled due to COVID-19. Utah also clinched the first-ever regular season Pac-12 Championship in that victory as well.

Scouting the No. 4 Red Rocks
Record: 4-1, 1-0 Pac-12
Last meet: W vs Arizona 197.075-195.650
The Red Rocks are coming off a much-needed recovery win over Arizona last week. Fans saw some changes in the lineups as senior Emilie LeBlanc was taken out of the beam rotation and freshman Jaylene Gilstrap was put in her spot. Maile O’Keefe and Cristal Isa also did not compete in the all-around for the first time this season.

In the rankings, the Red Rocks jumped from No. 6 to No. 4 and now are only 0.016 of a point behind No. 3 Oklahoma in the season averages. They also moved up in the event rankings, going to No. 3 on floor, tied at No. 4 on beam with LSU and No. 8 on vault and bars.

Scouting the Huskies
Record: 0-1, 0-1 Pac-12
Last meet: L vs Oregon State 192.875- 194.925
The Huskies are led by Skylar Kilough-Wihelm and Geneva Thompson who saw their first action of the season last week against Oregon State. Last season Thompson was selected to the All-Pac-12 vault team and will help lead the team with six freshmen. The team is under new direction as Ralph Rosso takes over the reins as the head coach for the Huskies.

Pac-12 in the Rankings
Utah leads the conference in the rankings coming in at No. 4. UCLA is No. 11 while the Arizona schools are currently tied for No. 15. Oregon State comes in at No. 39 while Washington is No. 41.

How to Support the Red Rocks
This week’s meet will be televised nationally on ESPNU with the action starting at 8 p.m. MST this Sat, Jan. 30.  John Roethlisberger and Alicia Sacramone-Quinn will serve on the TV commentary while fans can also listen on the Home of the Utes, ESPN700.

What’s Next
After this week’s meet the team will hit the road for their next two meets. They will take on Arizona State on Feb. 6 and Stanford on Feb. 15.