Surrealism and the Power of Human Connection in ‘Strawberry Mansion’ 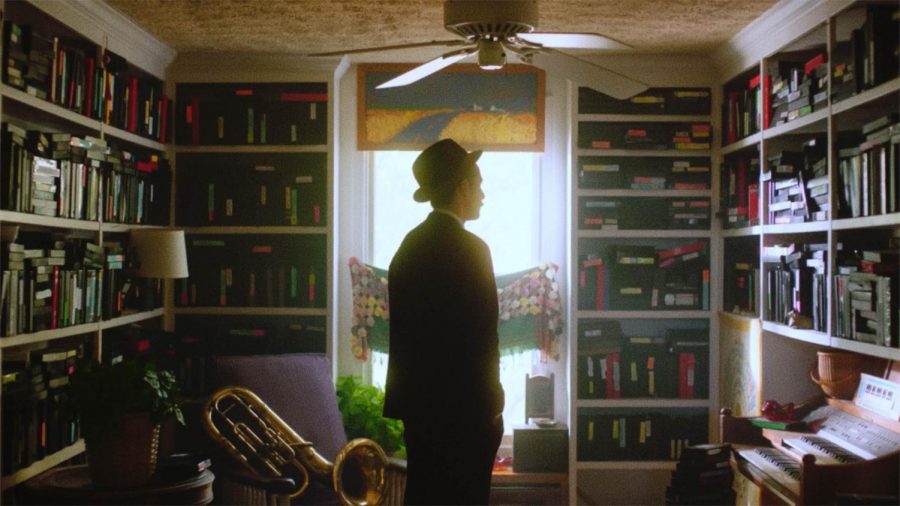 “Strawberry Mansion” is set in a not-too-distant future wherein dreams are recorded and taxed. Arabella “Bella” Isadora (Penny Fuller) is an eccentric old lady who lives in a strawberry-colored home, and has not paid taxes on her dreams in years. In fact, she hasn’t even upgraded to the latest system of dream recording, so her home is filled to the brim with VHS tapes of her dreams. Enter James Preble (Kentucker Audley), a tax auditor who is tasked with Bella’s case.

As Preble begins to work through the vast collection of Bella’s dreams, he notices that her dreams are far more creative and imaginative than the usual ones he sees. Eventually, the lines between reality and the dreamworld are blurred as Preble’s own dreams and experiences of reality begin to overlap with what he sees in Bella’s recordings.

More than a mere critique of an all-seeing state that surveils recorded dreams, “Strawberry Mansion” leaps into the surreal in order to provide a fantastical adventure and a nonlinear love story.
Adventure in the Dream World

Co-directors and writers Albert Birney and Kentucker Audley stated that this film was designed to explore a balance between the “organic and synthetic,” or in composer Dan Deacon’s words, “It strikes a balance between absurdity and sincerity.” The film is based in the real and surreal, the physical and metaphysical and both the past and the future.

These attempts to find balance between seemingly incongruous elements are reflected in some of the formal elements of “Strawberry Mansion.” With the technology to record dreams, the audience is transported into a futuristic setting, but the stylings of the camera and a slight-grainy texture bring a vintage feel to each scene. The film’s score aptly balances orchestral sounds and synthesizers to further bridge this link between the past and the future. Coupled with a nonlinear narrative, “Strawberry Mansion” captures the feeling of what it is like to dream. The elements of the dream are constantly changing and not everything makes logical sense, but the heart of the film captures an emotional realism about love and trying to find the truth.

While Preble reviews Bella’s dreams, he meets young Bella (Grace Glowicki), and she shares with him the value of human connection throughout both time and space. At separate points in the film, Penny Fuller’s Bella asks Preble, “Are you enjoying my dreams?” and later she states, “I wanted someone to share my dreams with.” The connections between Bella and Preble go far beyond his role as her tax auditor, but the fact that their relationship is presented in a nonlinear fashion signifies that there is something supernatural about their connections to each other.

Bella also teaches Preble about the dangers of the dream-surveillance state as she noticed that capitalist-consumer advertisements have infiltrated the public’s dreams. With these advertisements, people’s dreams are no longer truly their own. Preble, along with Bella, wishes to change this reality after he has witnessed the beauty of Bella’s dreams and memories. Their adventures reside in and transcend the physical world, but they are connected by the depths of human emotion.
Final Thoughts
Tactfully, “Strawberry Mansion” tends to raise more questions than it answers, but the experience of watching this film is as much of an adventure as the one that Preble and Bella embark upon. The film manages to balance a love story with a fantasy narrative, a critique of government and capitalism, wild childlike imagination and a horror-like take on certain fairy tale motifs.

The dream world and the physical world overlap in moments that force you to question the reality you’re experiencing, but as Bella toasts, “Here’s to losing our minds!” The film is playful and evocative. At one key point, Preble ekes out the final notes of “Row Row Row Your Boat” on a piano — the part accompanied by line “Life is but a dream.”

“Strawberry Mansion” captures the craziness that is the dream world, but its larger statements about finding human connection, coping with profound emotions and searching for the truth bring a touch of concrete values to the incredible world that Birney and Audley have built.