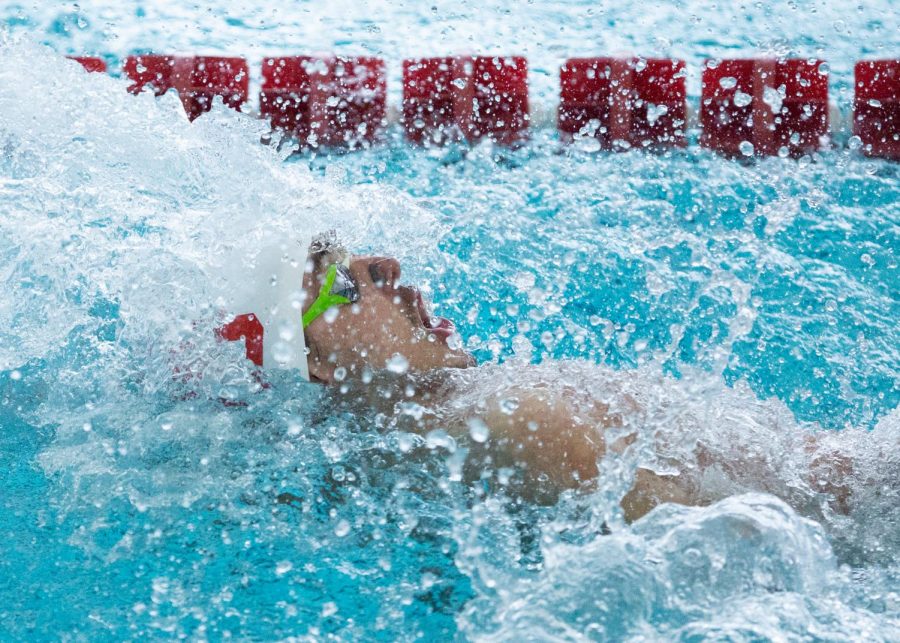 U of U swimmer during the swim and dive meet vs The Colo Mesa Mavericks on Jan 23, 2021 at the Ute Natatorium on campus. (Photo by Jack Gambassi | The Daily Utah Chronicle)

The University of Utah men’s and women’s Swim and Dive team competed against BYU this weekend at home. Not only was the meet against BYU, but it was also seniors weekend where the teams celebrated their seniors.
Men’s Swim
The Utah men’s swim team kept pushing their momentum forward into this weekend as they beat BYU 179-121.

DeRyk won the 50 free race and Felix Chiun won the 100 free race. Britton took second place in the 100 breast race. Ben Waterman took second in the 200 fly. Preston Planells took first on the 200 back scoring a time of 1:48.21.
Women’s Swim
The women were also able to keep the momentum going from their last meet to beat BYU 176-124.

To start things off, Emma Broome, Emma Lawless, Maddie Woznick and Charity Pittard won the 200 medley relay race, beating the pool record with a time of 1:41.09. Audrey Reimer kept things going by winning the 100 and 200 back race, breaking the pool records in both events.

Lexi Mills took first place on both the 1m and 3m event while fellow Ute, Lizzy DeCecco took second in those events. Regan Caufield took fifth place in both events and Emma Ruchala took sixth place in the 1m event.

Overall, the Utes had a successful weekend. The Diving team heads to Colorado Springs for the Air Force Diving Invitational while both swim teams prepare for the Pac-12 Championships taking place at the beginning of March.