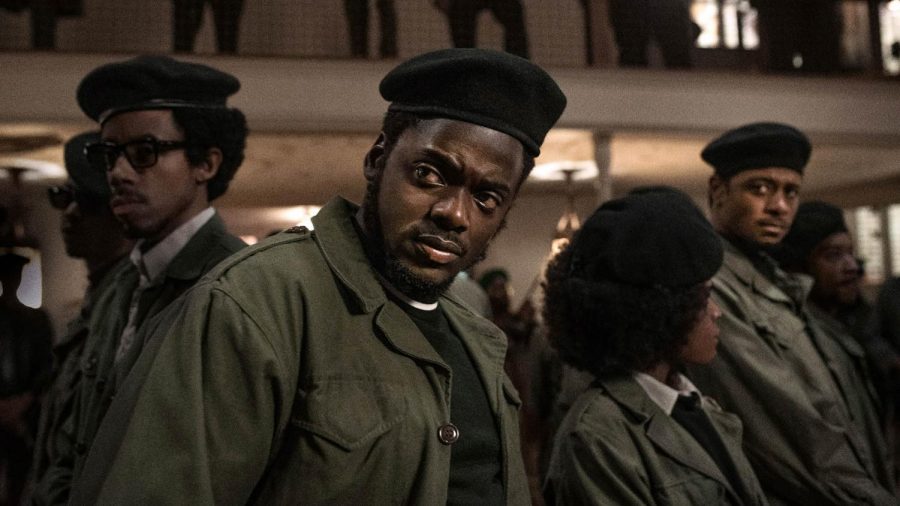 Still from "Judas and the Black Messiah," an official selection of the Premieres section at the 2021 Sundance Film Festival. (Photo by Glen Wilson | Courtesy of Sundance Institute)

“If this building caught on fire right now, what would y’all be worried about?” Fred Hampton (Daniel Kaluuya) asks a crowd of white working-class protestors, whom he hopes to recruit to the Black Panthers. “Water,” Hampton answers, “and escape. If somebody were to ask you, ‘what’s your culture during this fire, brother?’ Water, that’s my culture. ‘Well, how about your politics?’ Water, and escape. Well guess what, America is on fire right now, and until that fire is extinguished, don’t nothin’ else mean a goddamn thing.”

“Get Out” star Daniel Kaluuya is full to the brim with spirit, rage, and love as Black Panther Party Chairman Fred Hampton in “Judas and the Black Messiah.” “Sorry to Bother You” star Lakeith Stanfield is the Biblical “Judas” of this story: the self-motivated Bill O’Neal who strikes a deal with the FBI to keep tabs on the Panther Party. Kaluuya and Stanfield completely transform themselves into these two 1969 Chicago leads and deliver what might be some of the greatest performances we’ll see in 2021. Based on true events, both historical and modern, Shaka King’s biopic is devastating and inflammatory. “Judas and the Black Messiah” premiered at the Sundance Film Festival as part of the Premieres section on Feb. 1, 2021.


The Black Panthers’ Radical Resilience
On the heels of major civil rights leaders’ deaths —  including the assassinations of Martin Luther King Jr. and Malcolm X — Fred Hampton’s charisma and passion quickly made him a new spokesperson for the 1960s Black liberation movement. The narrative of “Judas and the Black Messiah” picks up here, structuring itself around the dreams, power dynamics, and relationships that made up the Illinois chapter of the Black Panther Party in 1969. It’s a vulnerable and exciting look at how these revolutionaries imagined a new world for Black people through measures such as free neighborhood clinics — a prominent one in Chicago was named after Black Panther Jake Winters (Algee Smith) — and free breakfasts for children before school (a program later adopted by the federal government).

In many ways, the 1960s-70s Black Panthers succeeded in strengthening their local communities where the government and American society at large had abandoned them. Hampton, in particular, engaged in the radical task of uniting diverse stakeholders from rival gangs to white hippies into the joint cause of community resilience. This made him a threat to the validity of the United States government, leading both local police and power-hungry FBI director J. Edgar Hoover (Martin Sheen) to put a target on this feared “Black Messiah.” In 1969, Fred Hampton — at just 21 years old — was killed in his sleep on the orders of the FBI. I knew a bit about the story of Fred Hampton going into “Judas and the Black Messiah,” but I was not prepared for the emotional depth that the cast and King’s scriptwriting would carry.


Community Versus the Ego
“Anywhere there’s people, there’s power,” repeats Hampton throughout the film. The story expresses that community strength can actually be a very natural and effortless thing, but it has been made radical by a capitalist ideology and an imperialist government — systems that uproot the connections we have with our neighbors and environment. Hampton’s partner, Deborah Johnson (Dominique Fishback), is a grounding voice of such radical mindfulness and compassion. Meanwhile, FBI informant O’Neal is the subversion of this message — he embodies the ego, emotional reactivity, and self-preservation. But the film is not quick to make black-and-white judgments, as King eases us into the moral complexities of surviving under racial and class oppression in America.

“Judas and the Black Messiah” inspires just as much rage as it does empathy. King asks us to take a critical lens to the systems that govern the U.S. and to practice love and kindness with ourselves and our communities.