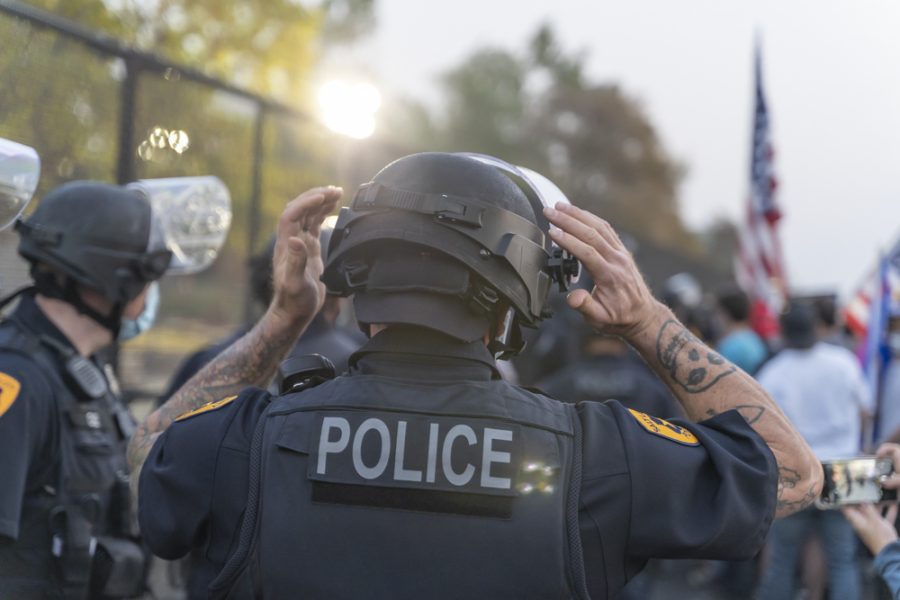 Police Officers assemble outside of The University of Utah in Salt Lake on October 7th, 2020. (Photo by Jake Stranzl | The Daily Utah Chronicle)

Utah has struggled with high rates of mental illness since long before the pandemic. Our state ranks fifth highest in the United States for suicide, and our rate of self-reported depression is four percentage points higher than the national average. Unfortunately, many Utahns who suffer from anxiety, depression, bipolar disorder and other mental health challenges are left to fend for themselves. In some Utah communities, over one- third of residents struggle with depression, but only a small minority of them receive adequate treatment. Similarly, Mental Health America ranked Utah as one of worst states for mental health care accessibility and treatment. Now, these factors compounded with the loneliness and anxiety-inducing instability of the pandemic, our state is going through a mental health crisis like never before.

Living in a state that stigmatizes mental illness can be extremely damaging. Instead of having resources readily available to bring relief, residents are often met with misunderstanding and confusion, or, in worse cases, violence. Thankfully, Sen. Daniel Thatcher and Rep. Angela Romero are working to address this problem with S.B. 47, which would establish a council of mental health advocates and law enforcement officials to ensure that Utahns struggling with mental illness receive the right treatment and care even in extreme situations. The creation of this team — known as a “Mental Health Crisis Intervention Council” — would be a great step for Utah, especially amid the disastrous effects of the pandemic on people’s mental and emotional well-being. S.B. 47 would emphasize crisis intervention approaches and mental health care while solidifying standards and protocols for local crisis intervention teams.

Last September, Linden Cameron, a teenager on the autism spectrum, was shot by a Salt Lake City police officer, leaving him in serious condition. His mother called 911 to seek help for Cameron as he was experiencing a mental health crisis, but he was met with escalation and violence rather than de-escalation. As Neurodiverse Utah said in a statement following the incident, “Police were called because help was needed but instead more harm was done when officers from the SLPD expected a 13-year-old experiencing a mental health episode to act [more] calm and collected than adult trained officers.”

If lawmakers implemented stricter rules and protocols for local crisis intervention teams to follow — alongside strong statewide oversight and guidance — incidents like Cameron’s could have been prevented. The passing of S.B. 47 would not only mean more mental health representation and advocates for Utahns, but also the prioritization of conflict intervention training efforts. Likewise, focusing on ways to de-escalate situations and provide relief to those suffering from debilitating mental conditions will ultimately prevent more tragedies in the future and allow those struggling to receive ample treatment. “The benefit is not only a better response, but also that the person in crisis is then diverted away from jail, away from the criminal justice system, and to services where they can get the support and treatment they need,” said mental health advocate and president of CIT Utah Sherri Wittwer in an interview.

Additionally, KSL discovered that only half of the more than 50 law enforcement agencies in Utah have completed initial 40-hour Crisis Intervention Team training. Wittwer called this a “barrier” in our state, and said, “We still need to get everyone unified as far as what CIT is and what that actually means… Different areas do different versions of CIT and some don’t do it at all.” In other words, residents going through a crisis may not have access to CIT officers depending on what part of the state they live in. With S.B. 47, however, we would have a strong statewide CIT program with everyone on the same page regarding training and response. Utahns suffering from a crisis and their families would finally be able to receive the support they need.

It’s more important now than ever that Utah steps up for its mentally ill residents. If the legislature passes S.B. 47, this new statewide council will prioritize mental health treatment and CIT, ultimately helping break down the stigma surrounding mental health in Utah and preventing unnecessary tragedies.