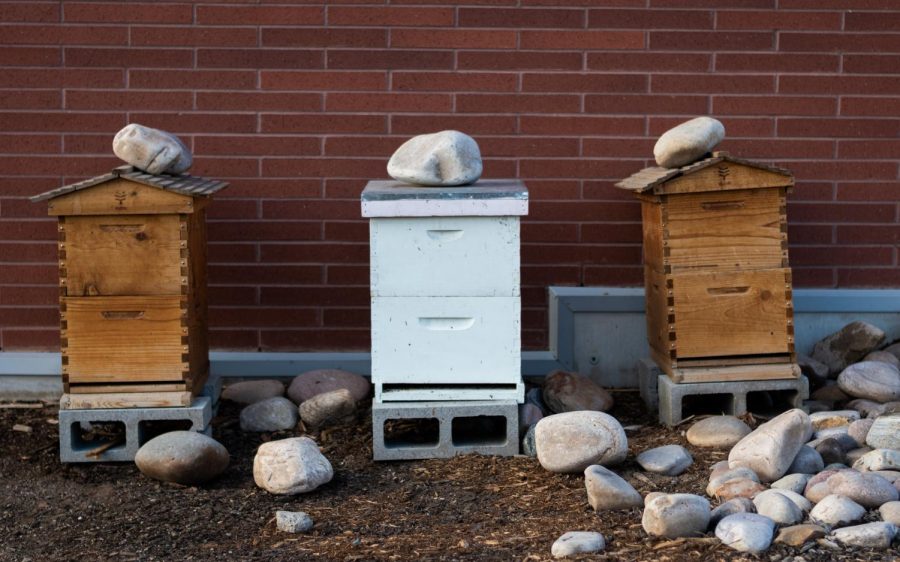 The University of Utah has been making strides since 2012 to create safe havens for bees on campus, which has culminated in the U becoming a certified Bee Campus USA affiliate in December 2020.

“This Bee Campus USA designation recognizes that the University of Utah has paid attention to biodiversity when it comes to pollinators, and we can be looked at as a role model,” said Amy Sibul, a professor of biology at the U and the Chair of the U’s Bee Campus USA committee.
The Designation
Sibul began doing outreach about pollinator conservation back in 2012 when she became the faculty advisor to the newly established U of U Beekeeper’s Association.

The Beekeeper’s Association was given permission to install honeybee hives on campus, which they used as a means of communicating with the public about the importance of pollinators, as well as the science and art of beekeeping.

In partnership with the College of Architecture, the Beekeeper’s Association installed a pollinator conservation garden on campus.

“So, when I learned about this possibility of getting this wonderful national recognition from the Xerces Society, which is a kind of national-level nonprofit organization that focuses on insect and invertebrate conservation, I was really excited,” Sibul said.

Sibul also cited the edible campus gardens as an important part of their application because of their native bee nest boxes.

“There’s this wonderful synergy between having organic, sustainable food produced on campus pollinated by native Mason bees that we provide nest boxes for,” she said.

As the chair for the Bee Campus USA Committee, Sibul worked with individuals from Red Butte Garden, the Natural History Museum of Utah and various students and staff on campus in order to achieve this designation.

Danielle Frohn, the assistant horticulturist in the children’s garden at Red Butte was a part of Sibul’s committee and was tasked with highlighting the work of Red Butte on the application to the Xerces Society.

“We have at least 132 native bee species found at the garden and that is due in part to the vast amount of different plant species that we have,” Frohn said. “So we try to have a bunch of different kinds of plants in the garden and as we redesign spaces we keep that in mind and try to grow our plant collections.”

The committee started filling out the application for the designation in August 2020, and it was officially awarded in December 2020.

“2020 is a rough year, there are so many really hard things to swallow, whether it’s remote classes, social isolation, illnesses that many of us are dealing with in our friends and family circles,” Sibul said. “So this felt like a fantastic thing to try to set as a goal and to achieve and to give everyone some good news.”

Sibul said the Xerces Society was impressed by the U’s already-established pollinator conservation habitat on campus as well as their public outreach initiatives.

In order to keep its status as a Bee Campus USA affiliate, the U has to maintain all of its conservation efforts, which Sibul said will not be a problem.

In addition to these already established initiatives, Sibul wants to implement more signage around campus.

“We’ll put in some new signs in the pollinator conservation garden that can help teach people about the importance of pollinators and why we need to pay attention, and what we can do to preserve habitat and limit pesticide use,” she said.

Frohn wants to encourage people to come to Red Butte and take a placard identifying bee-friendly plants to grow in their home gardens to make their own backyards a pollinator safehaven.

“We have a little bee symbol for any of our plants that are bee-friendly,” she said. “So if anyone’s looking to add more bee-friendly plants, they can just take a stroll around the garden and take some notes from us.”
The Buzz about Bees
Sibul first got interested in bees when she was in graduate school and was studying the Parachute Penstemon, a rare plant only discovered ten years prior to her study.

“Part of what I had to do was study what might be pollinating that particular plant and it turns out that a variety of bees were pollinating this amazing plant,” she said. “So I just took a deep dive into this realization that, oh my goodness, insects are incredibly important.”

Sibul said there is an incredible diversity of pollinators and they serve an integral role in both natural and agricultural ecosystems.

“The vast majority of pollinators are bees. Most people only know about honey bees and maybe bumblebees,” she said. “But in the world, we have 20,000 different species of bees; only seven of them are honey bees.”

Without bees pollinating crops, people would not be able to eat some of the produce they currently enjoy.

“Without bees, we don’t have raspberries, tomatoes, squash, apples, you know, massive amounts of our most beloved produce are thanks to pollinating bees,” she said.

“We have over 1,100 scientifically cataloged species of bees. Just to compare that, the total number of bee species east of the Mississippi River in North America is just under 700,” she said. “Our state alone has more than the entire Eastern landmass of North America, so we really are a hotspot.”

Due to habitat destruction and pesticides, however, there are large declines in many native bee species.

Sibul also said the Xerces Society’s latest count of the western population of the monarch butterfly is upsetting. In the 1980s, an estimated 4.5 million monarchs overwintered along the Pacific coast in California and Baja, Mexico.

“That’s been in drastic tailspin declines for decades now and they counted as of this winter only 2,000 individual monarchs, and I am afraid that this Western population of the monarch is now functionally extinct,” Sibul said.

With the massive declines in insect populations, Sibul said the world is undergoing what the scientific community calls an insect apocalypse.

“We humans need to snap to attention and really start figuring out how we can live more simply, so that we can leave more wild lands, reduce the spread of pesticides across the landscape and protect our insects,” she said. “If not for them, protect them for our own well being.”