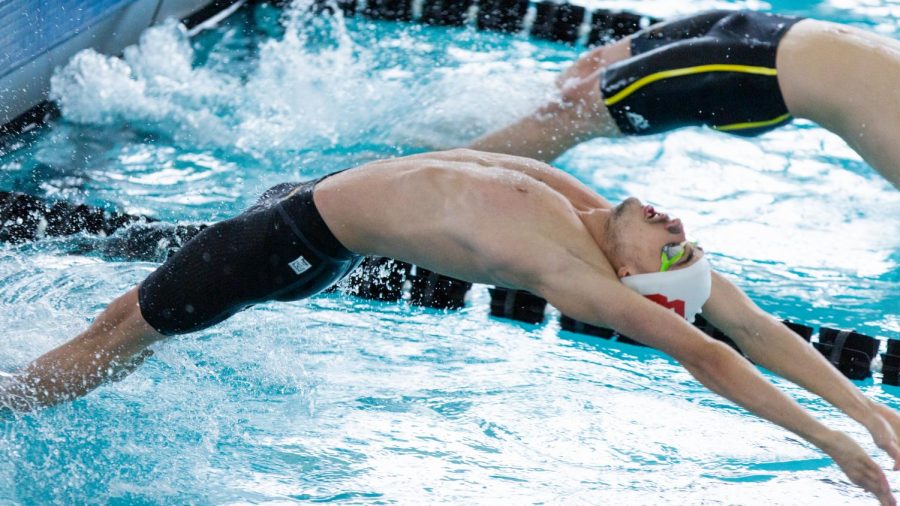 Junior U of U swimmer, Andrei Ungur, during the swim and dive meet vs The Colo Mesa Mavericks on Jan 23, 2021 at the Ute Natatorium on campus. (Photo by Jack Gambassi | The Daily Utah Chronicle)

On the second day of competition, the Utes started out strong as Contreras took second place in the 100 free event with Noah Carlson and Hynes placing third and fourth place. In the 200 back event, Preston Planells placed in second place with Parker McOmber placing right behind him in third place. Hernandez-Nietling and Britton placed second and third in the 200 breast event.

In the 500 free event, Micah Ginoza placed in second while fellow teammate Ryhs Winter came in third. Waterman and Cole Giandinoto placed second and third place in the 100 fly event. Hernandez-Nietling took second place in the 200 IM event. In the last event of the competition, Waterman, Contreras, Giandinoto, and Marko Kokacic teamed up to take on the 400 free relay by posting a time of 2:58.27 and placing second place.

Overall, the Utes lost to USC 160- 94. The Utes’ next event will be the Pac-12 Diving Championship in Tucson, Arizona, on Feb.  24-27. The women’s swim team will travel to Houston for the Pac-12 Swimming Championships, also on Feb. 24-27. The men’s championship will take place at the Hillenbrand Aquatic Center while the women’s competition will be at the University of Huston.