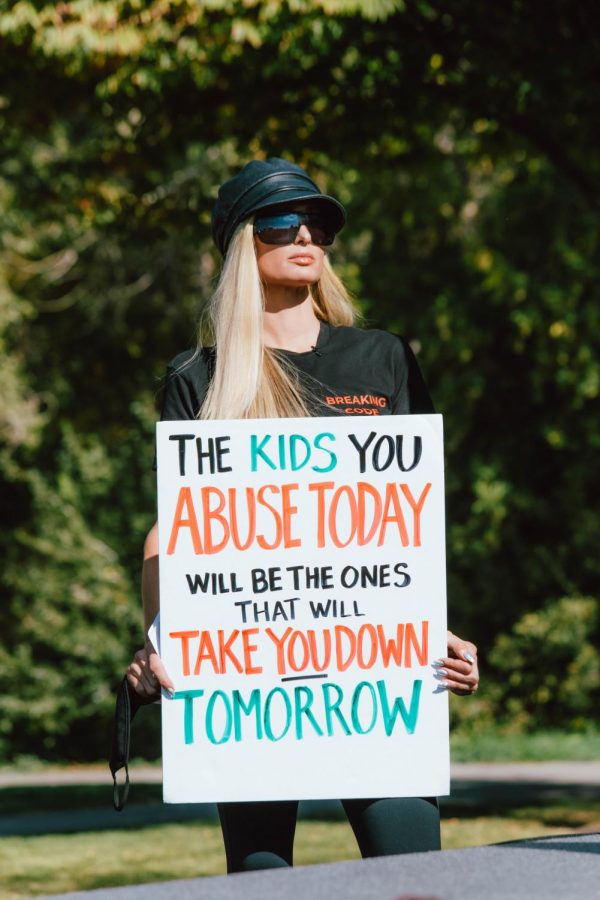 (Paris Hilton in Provo, UT during 2021. Courtesy of Jennifer Rovero)

A reality TV star, model and socialite may just have sway on Utah politics. Paris Hilton shifted much attention to the ongoing legislative session when she testified to the state’s Senate Judiciary, Law Enforcement and Criminal Justice Standing Committee on Feb 8. She gave her support to S.B. 127, Human Services Program Amendments, which would grant more oversight to Utah’s youth facilities that house “troubled teens” and seek to rehabilitate them. In the 1990s, Hilton was sent to the Provo Canyon School where she suffered mistreatment and abuse. Hilton’s testimony was an important step in passing S.B. 127, and the legislature needs to act next to protect Utah teens.

This bill would require documenting any use of restraint and seclusion. It would also require authorization from the Office of Licensing to use chemical and mechanical restraints, like a straitjacket. This bill has the chance to make a real impact in the lives of many. Nearly 12,000 teens have lived in Utah residential treatment facilities over the past five years, so the potential impact is huge. If passed, the oversight in this bill could reduce sexual abuse in these facilities, which Hilton highlighted in her testimony.

Hilton released a documentary last year detailing her abuse at the Provo Canyon School. In her testimony, she spoke of the invasions of privacy she experienced saying, “At 16 years old — as a child — I felt their piercing eyes staring at my naked body. I was just a kid and felt violated ​every single day.” Hilton is not alone in this experience as there are reoccurring reports of sexual violence in these centers. These reports persist due to the licensors’ hesitance to engage and because programs often prepare for visits ahead of time.

Hilton’s documentary garnered national attention on this issue and inspired others to come forward about their experiences in similar facilities. Jeff Netto, a local Utahn, also testified before the committee. Sen. Michael McKell, the bill’s sponsor, described both of their testimonies as “heart-wrenching.” He furthered, “It’s been really helpful [that] Paris Hilton’s using her voice in a positive way. She wants to help facilitate change and I think she’s extremely sincere in her efforts.” After 15 years of inaction on regulations for youth residential treatment facilities in Utah, Hilton’s experience prompted change. But, change doesn’t stop here.

Utah has a clear problem — the treatment of teens in youth residential treatment facilities is abhorrent. Hilton called for senators to do more than just pass this bill and we should require this of them as well. First and foremost, the senators that unanimously passed this bill out of committee need to take action. They must call for the same national regulations that Hilton hopes to promote. Senators shouldn’t use this bill as an opportunity to protect the reputation of Utah, they should be genuine in championing this issue nationwide.

Sen. McKell talked about future legislation that digs into how the teenagers are transported to the facilities, noting that both Hilton and Netto were picked up in the middle of the night. He’s also curious about how these facilities market to parents, emphasizing that front-end disclosure is imperative. We should also listen to the ideas expressed by Sen. Dan Thatcher, who suggested an immediacy clause and a commission to get to the bottom of this problem. Urgency is crucial to protecting the teens in these facilities. Such a commission would provide an opportunity to prioritize the health and safety of these youth. It would also show an ongoing commitment to this issue, ensuring it never again goes untouched for 15 years.