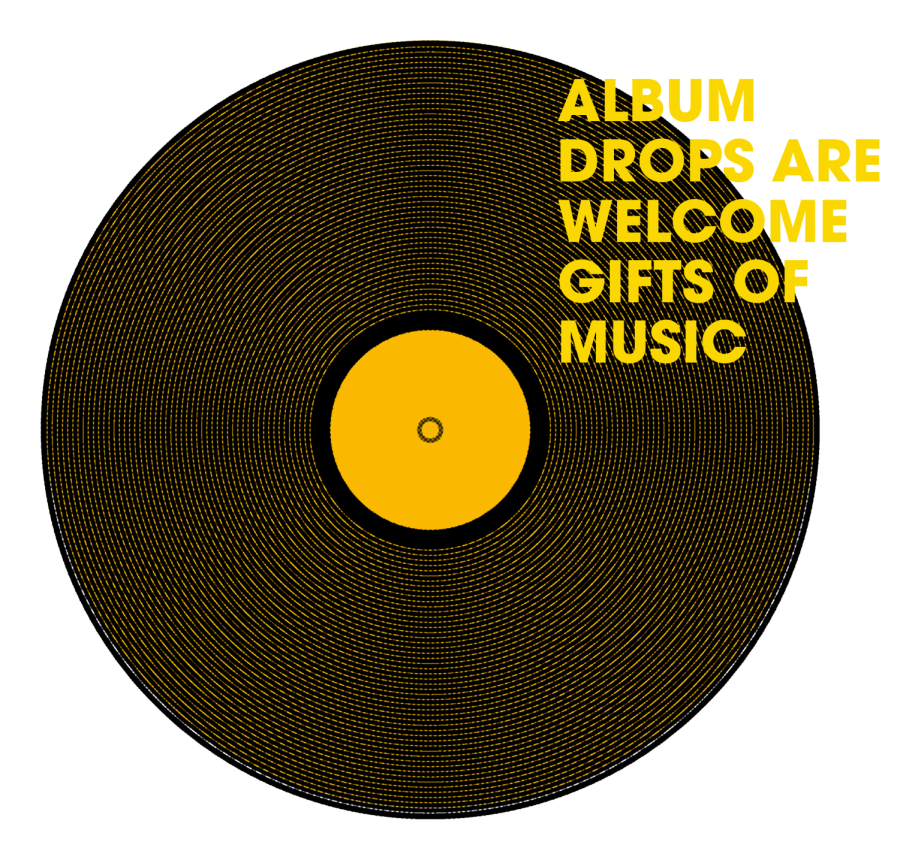 The surprise album drop is not anything that is new to the music industry. From the 2007 release of “In Rainbows” from Radiohead — who only gave 10 days’ notice before dropping the album — the act of giving very little to no announcements, marketing or promotion for a new album has become a standard practice for big-name artists.

With as little as 24 hours notice before an album release, the news of a surprise album drop creates huge amounts of buzz and excitement before the album is widely available. Under traditional marketing plans for album releases, each album is advertised for months before the eventual release. These traditional release schedules include the release of singles and music videos, as well as marketing surrounding the eventual release date. For surprise albums, however, an announcement may bring news of an immediately forthcoming album, or the simple release of the album could be all the announcement entails.
Let’s Focus on the Albums
Once that announcement is released — or the album simply appears on a streaming platform — the excitement for the album is extreme. When the promotion for an album is dragged out over the course of several months, the excitement can sometimes wear off in the process of waiting. If done correctly, waiting for a new album can be a practice in delayed gratification, but when the wait is supplemented by singles and other material, the attention can be drawn away from the actual album.

One of my major complaints about the mainstream music industry is the fact that the release of singles can detract attention away from the album as a whole. While it may not be as common anymore to listen to individual albums at a time, I think there is beauty in examining each album as a work of art in itself, rather than simply tearing it apart for singles and records built for widespread dissemination by radio. Surprise album drops challenge this pattern — because the entire work is released at once, the audience is encouraged to listen to the whole album instead of just the marketed top tracks.

As a case study and recent example, Taylor Swift’s “folklore” was released on July 24, 2020 — just 16 hours after an announcement on social media. Following Taylor Swift’s announcement, news releases and press articles were written in a flurry to offer immediate coverage of this surprise. Then, once the album was released, the album was reviewed as a collective body of work. By not releasing singles in advance of the album release, “folklore” was able to stand on its own as a complete work of art. From “folklore,” the single “cardigan” was released during the same week as the album, and later in 2020, “exile,” “betty” and “the 1” joined the list of singles.
Why Wait?
Written entirely during quarantine from the COVID-19 pandemic, the “folklore” release also serves as a capsule for a specific moment in time. For other artists who continued working creatively during the pandemic, utilizing the surprise album release format was the only option that made sense. For Run the Jewels, it did not make sense to delay the release of “RTJ4” after it was finished. In their album release announcement, the duo said, “F— it, why wait. The world is infested with bulls— so here’s something raw to listen to while you deal with it all.” Surprise album releases are a surefire way to quickly release music that is relevant and tied to current events. By quickly releasing an album, that body of work is cemented in the period in which it was released. These albums are definitively relevant and historical markers of movements in time.

Financially speaking, surprise album drops are primarily utilized by big-name artists who already have a large following. But even for smaller artists, who may typically have a smaller budget for promotion, surprise album releases can be a welcome reward for loyal listeners.

The surprise album should by no means become the only method of releasing an album — they work because of the surprise and shock value that they deliver. Given the ability to create immediate hype, reflect on current events and honor the complete collection of an album, the surprise album drop is a feature of the music industry that is welcome and necessary.