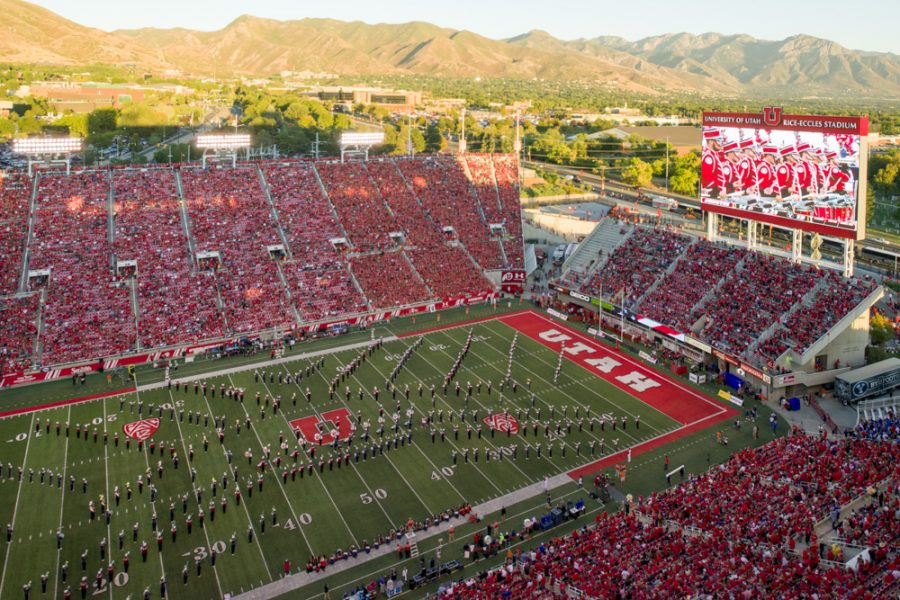 The University of Utah and BYU marching band performed together at halftime during the game vs. the Brigham Young University Cougars at Rice-Eccles Stadium on Saturday, Sept. 10, 2016. (Photo by Kiffer Creveling | Daily Utah Chronicle)

Late on Monday night a University of Utah spokesperson confirmed to multiple outlets that head coach Kyle Whittingham and the football program have parted ways with wide receivers coach Guy Holliday. The news comes after a tumultuous Sunday night that involved Holliday’s son, Justin, stating that the U had fired his father.

While there has yet to be a public release, Holliday has removed the University of Utah from his Twitter bio and he has also been removed from the coaches page on the Athletic Department website.

Holliday took to Twitter on Monday night to address some of the comments that were made by his son as well as to confirm that he was no longer with the program.

“If you know me, no one speaks for me, I speak for myself!” Holliday’s tweet read. “The only thing anyone wants is an opportunity. I’m thankful for the opportunity. At the end of the day, no fan, no game ever meant more to me than my players. Change is consistent in life and I love new challenges!”

Holliday joined the Utah coaching staff in 2016 after holding the same position at BYU for three years. He has been coaching for the better part of two decades both as a wide receivers coach and an offensive coordinator.

Holliday’s release comes shortly after the departure of two of Utah’s most talented wide receivers. Bryan Thompson, who spent three seasons with the team recording 33 receptions for 756 yards and four touchdowns, announced his transfer to rival Arizona State on Feb. 18 via his twitter account.

Samson Nacua will be a senior transfer as he spent four seasons with the program and posted 82 receptions for 1015 yards and 11 touchdowns. Nacua announced his transfer via Instagram on Feb. 26 and it is yet to be determined where he will end up.

Tim Patrick was the most successful WR under Holliday, during the 2016 season Patrick led the team in receptions with 45 total. He also had 711 yards on the season and five touchdown catches.

During the 2019 season the group as a whole had their best showing under Holliday; the aptly named ‘Bomb Squad’ led the conference in passing efficiency with a score of 174.05. They also had the highest completion percentage of any team in the Pac-12, bringing down 72.6% of balls thrown their way.

With spring ball set to begin in the coming weeks, it is not clear as to when a coaching hire will be made to fill the vacancy on the coaching staff.