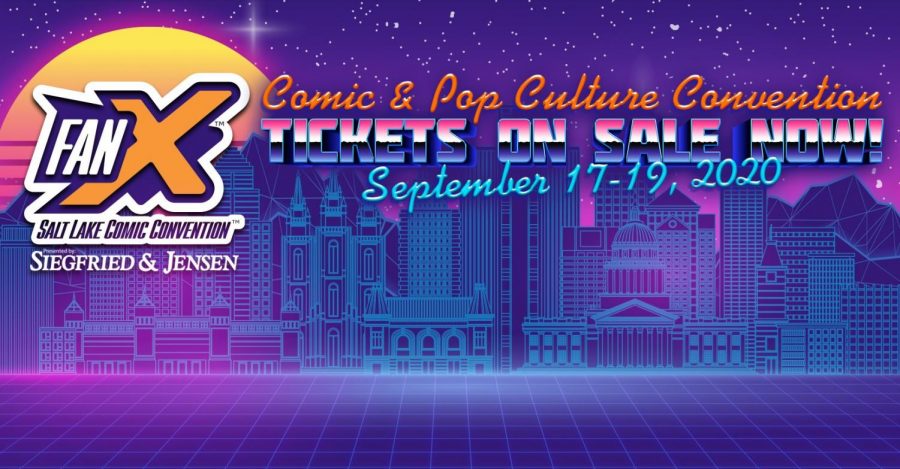 The FanX Salt Lake Comic Convention has announced its first celebrity guests for its 2021 event, which is set to take place Sept. 16–18. The convention has successfully put on 12 events over the past seven years, making it a staple for Salt Lake City tourism and geekdom. Fans from across the country have swarmed the Salt Palace one to two times a year with excitement, cosplay and all things “geeky,” seeking celebrity sightings and panels, photo ops, merchandise, artwork and — most importantly — community.
The Guest List
FanX announced its first 2021 guests in January — Martin Kove and William Zabka from the TV series “Cobra Kai.” This announcement was followed by six other guest announcements and the promise of many more to come in the following weeks.

The current celebrity guest list includes Jess Harnell, Tress MacNeille, Maurice LaMarche, Rob Paulsen and Jim Cummings. These voice actors are known for voicing animated icons like Winnie the Pooh as well as characters from the Animaniacs and Pinky and the Brain. They are also known for their hilarious FanX table readings, like the tongue-in-cheek melodramatic and cartoonish reading of “Twilight” as well as Yakko’s World song from “Animaniacs.”

Alan Ritchson, known for his roles in “Titans,” “Teenage Mutant Ninja Turtles” and “The Hunger Games: Catching Fire,” will also be making an appearance at FanX.
Comic-Con and COVID-19
Many were disappointed when FanX announced in July 2020 that they were postponing the event because of the COVID-19 global pandemic, but are hopeful this year that the event will happen as planned.

“I’m currently planning to attend,” said University of Utah graduate Catie Skola. “Partially because they carried over the pass I bought for the one that was postponed, and partially because I’m still hopeful that the pandemic will be less of a problem by then.”

Skola has attended all 12 FanX events and is an active member of the Facebook group and the community surrounding it.

“I was sad that I didn’t get to do the normal thing of going and seeing friends. I was also relieved that I didn’t have to make a decision about going during a pandemic,” Skola said.

The convention organizers had waited as long as they could before making their decision on whether to hold the convention, communicating through their newsletter and Facebook group with optimism that the pandemic would pass in time for the event. Unfortunately, cases increased, restrictions were implemented and celebrity guests began to cancel — forcing them to postpone the event.

“Our top priority has always been and will continue to be the safety and well-being of our FanX family,” the organizers said in an announcement last summer.

Organizers began planning the 2021 event at the same time and worked to help their community transfer purchased tickets and photo sessions to the new dates. They also worked with local hotels — where visitors often stay for the event — to help with changing or refunding accommodations. The organizers also made plans and continued to engage with their community through virtual panels and celebrity meet and greets, pop culture and comic-related news and other online games and events.

As COVID-19 vaccines become more available and more celebrities and events for the FanX convention are announced, fans are remaining optimistic and getting excited for another pop-culture-filled fall weekend. Things might look a little different from what they have in the past, but there is hope.

“Anything can happen in the next six months, so there’s still some uncertainty there,” Skola said. “I think masks and hand sanitizer are going to be a permanent fixture, whether I’ve had my vaccine by then or not.”