U Law Professor and Student Work to Confront Barriers Head On 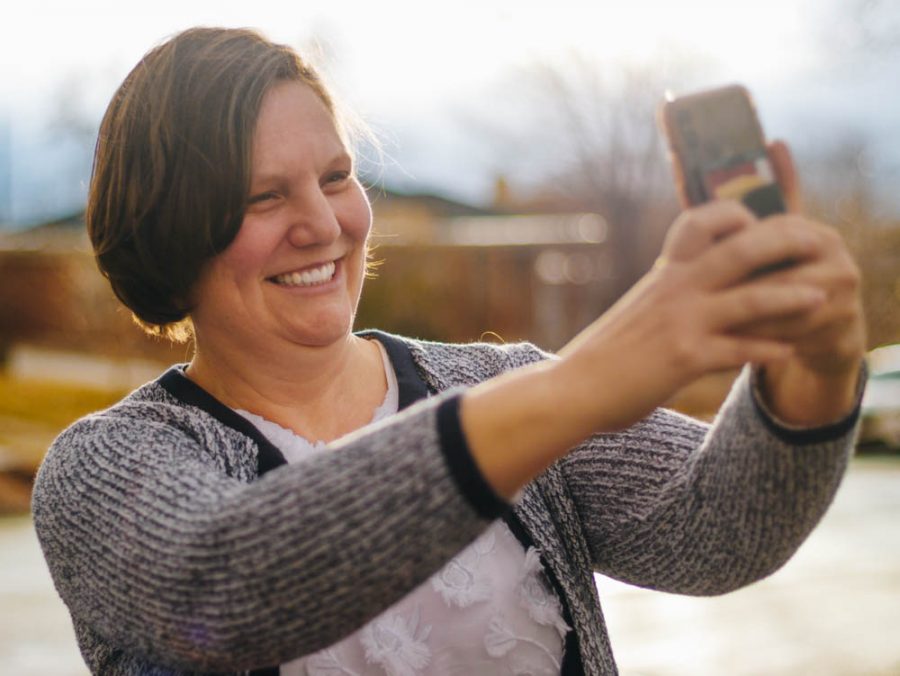 University of Utah 'Tik-Toking' Professor Ruth Hackford-Peer demobnstrates a selflie video in front of her house in the Sugar House area, SLC, on January 29th, 2020. (Photo by Mark Draper | The Daily Utah Chronicle)

The tiny screen lights up and the video begins, “If law school was not designed for you…” Ruth Hackford-Peer, or @lawoutersider has been answering that question on TikTok, for over a month now giving out law advice to those who want it.

The inspiration came from her 19-year-old son, who’d gone viral on the platform and shown her a couple of videos. She said at the time her son was following a teenager on TikTok who was closeted but had a large following.

“The whole world knew he was gay, but he was afraid to come out at home, right? He never showed his face and so I thought, well, ‘I’ll get on TikTok. And I’ll be that mom that says nice things to young, struggling, queer kids,’” she said. “And then immediately [I] just got sucked [into] the whole world, like there was ‘lawyer TikTok.’ And they’re, you know, there are just all these communities that I didn’t know existed.”

Very quickly the platform gave her an outlet to socialize and do the thing she was doing before the pandemic hit: mentor.

Hackford-Peer took her life experiences as a queer woman, a non-traditional, first-generation college student and began to make information accessible about law school for potential students who are interesting in pursuing a career in law.

In addition to being a lawyer and TikToker, Hackford-Peer is an adjunct professor at the S.J. Quinney College of Law at the University of Utah who teaches trial advocacy. Her career in law came later in her life, at age 37.

“I just for years, I had been thinking there’s this institution that I don’t quite understand that has all this power over my life,” Hackford-Peer said. “But I had no understanding or ability to think about changing institutions themselves, or changing laws that would affect the institution.”

She said while she had been pursuing her undergraduate degree at Utah State University she was discouraged by a counselor from pursuing a law degree. Hackford-Peer said it had always stayed in the back of her mind.

“She really steered me away from it and said that it was really competitive and male-dominated and you had to be a quick thinker. I’m not a quick thinker — I’m a thorough thinker,” Hackford-Peer said.

She went into law wanting to pursue a career as a social justice lawyer after working with Equality Utah on bills. However, by the time she finished law school, she said the LGBTQ+ landscape had drastically changed.

Now, she wants to help marginalized folks overcome the emotional and physical barriers present when pursuing a degree in law and deconstruct the intimidation of law school. Hackford-Peer said she acknowledges she cannot speak for other minorities’ experiences, specifically people of color, but she is trying to use her platform to speak to her own struggles and help others.

“I think systemically there’s similarities, right? Like historically, law school was for white wealthy men. And there’s so much of that that’s still in play,” she said.

As a first-generation college African American college student and second-year law student at the S.J. Quinney School of Law, Zachary Scott experienced similar barriers to getting into law school.

When he started his undergrad at Westminster College, Scott said he didn’t have the knowledge or resources to capitalize on his experience. However, he found a mentor in a friend’s dad who sat him down and told him the things he needed to do in order to take advantage of college.

Scott said he had to play a lot of catch-up in the following years to make up for the lost time.

“I think it’s true for a lot of diverse undergraduate students because without that kind of guidance from the get-go you can be put kind of at a disadvantaged spot,” Scott said.

Now, as a law student, he is passionate about removing those barriers for other diverse students and does so through several avenues. One of them being the U’s “Famtorship” program, where he is paired with a mentee and helps them learn the ropes of higher education. He also volunteers at the Utah center for legal inclusion and is a member of the Graduate School Diversity Council.

“This is a really convoluted system to try and get to a good graduate program, and even once you’re there, there’s lots of hoops you need to jump through to still try and set yourself up for success. I knew I wanted to pay it back because I just realized I was lucky,” Scott said.

One major barrier Scott pointed to was the law school entrance exam — the LSAT. He said that pre-COVID-19 he was working on creating a way to fund students’ LSAT prep courses and exams.

“It costs money to take, and it costs money to get into a decent class,” Scott said. “I would hope that administratively there’s maybe less emphasis on LSAT scores and more on what’s their story, and are they bringing something unique to the University of Utah, I think that’s what’s important.”

Scott believes that diversity in the classroom, especially in law school, elevates the learning process.

“If everyone thinks the same, then how do we make progress? If no one’s going to challenge you on your beliefs then, we don’t get good at defending our positions and we don’t learn how to see things from a different perspective,” he said. “And that’s what’s valuable about, you know, having a diverse set of students you don’t want everyone to just agree.”