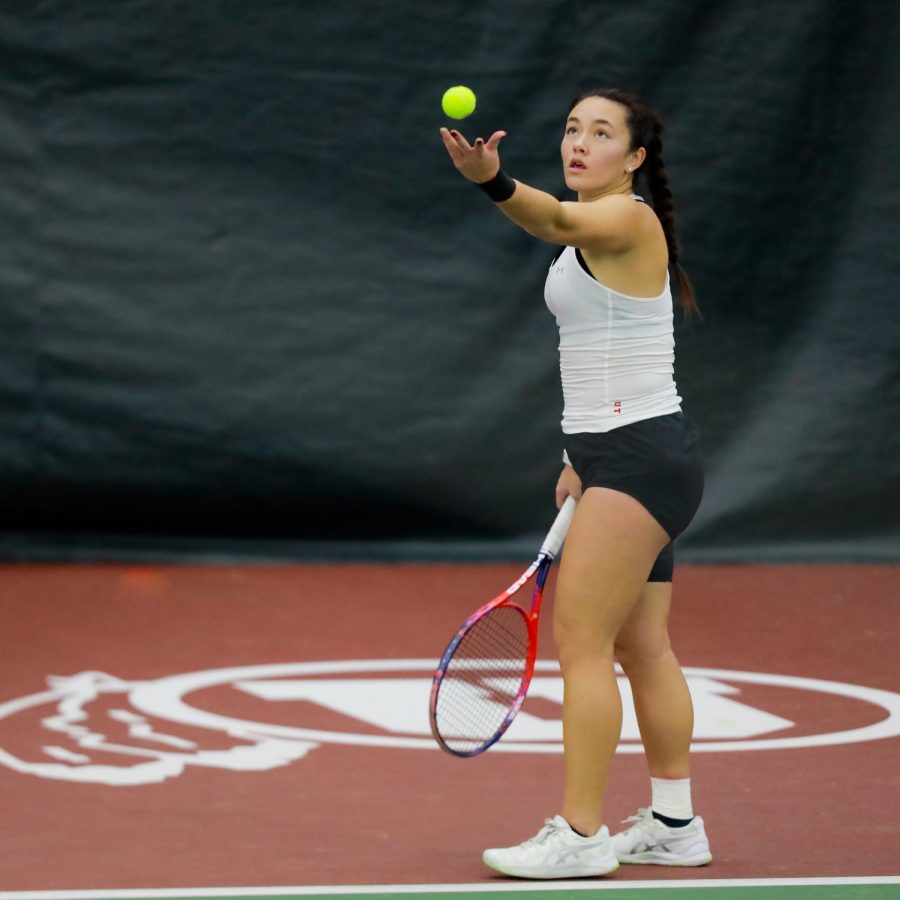 On Saturday, March 6, the University of Utah men’s tennis team faced two tough opponents, playing Utah State and Montana at the George Eccles Tennis center. Utah triumphed in both fixtures, beating Utah State 4-0 and Montana 5-0. Meanwhile, the women’s tennis team carried on the tradition of beating rival BYU amid a rocky week.
Men’s Tennis
The day began for the Utes against in-state rivals, Utah State. The Utes’ doubles duo of Geronimo Busleiman and Franco Capalbo performed admirably, fighting through a closely contested matchup, to win 6-3. In singles, Busleiman continued his strong day on the courts, winning in straight sets and earning another pivotal point toward the overall match. The other Utes’ doubles teams were either in the lead or heading into tie-break situations when the match was called. The match was locked up by Bruno Krenn.

After their strong performance against Utah State, the Utes carried the momentum into their match against Montana. The doubles pairings of the Utes mixed around, but the results remained the same. This time Busleiman teamed up with Chris Heck, and won a convincing match 6-1. Slava Shainyan and Francisco Bastias also picked up a win in their doubles matchup. Busleiman completed a wonderful day of tennis, picking up a comeback win in his singles matchup. The match was clinched as Shainyan and Bastias both won at the same time, giving Utah a dominant 5-0 victory over Montana.
Women’s Tennis
The Utah women’s team had a rocky week, but picked up a huge win over rival BYU, continuing a streak of 12 straight victories over the Cougars. The Utes faced off against BYU on Wednesday, March 3 with the final match score ending 4-2. The first doubles pairing of Madeline Lamoreaux and Emily Dush picked up a big win, beating BYU’s first pair 6-3. Despite the doubles victory, M. Lamoreaux could not carry over her winning ways into her singles match, falling in 3 sets in a hotly contested matchup. However, Dush and Lindsay Hung caught fire in their singles matches, giving the Utes two much-needed points. Anya Lamoreaux clinched the match for the Utes, earning a massive victory.

On Friday, March 5, the Utes were faced with a tough challenge as they were visited by the No. 28 team in the country, the Stanford Cardinal. The Utes lost some close matches but ended up losing 7-0. M. Lamoreaux and Dush played in the closest match of the day, fending off multiple rallies from the Stanford duo, but eventually losing the point and the match to a solid Stanford squad.

The Utes continued their trek through California facing another tough opponent in No. 12 ranked Cal Golden Bears. The Utes lost this match 7-0, as the top talent of Cal ended up being too much to overcome. A bright spot in this match was the performance of Anastasia Goncharova, who battled all the way to a tiebreaker third set. Goncharova was unable to come up with the win in this tie breaker, but still showed guts in her performance.
Up Next
The Utah women’s team will continue its road trip west as they face Washington State on Thursday, March 11. They will then travel to Oregon to take on the Ducks on Sunday, March 14 at 12 p.m. MST.  The men’s team will open up a loaded road trip on Tuesday, March 9 facing off against Loyola Marymount at 2 p.m. MST. The following day they will play San Diego State at 3 p.m. MST, and on Friday, March 12 they will remain in California to face UCLA at 3 p.m. MST. The California expedition will end Saturday, March 13 against USC, beginning at 4 p.m. MST. All of these events can be watched live via Utah tennis streaming.