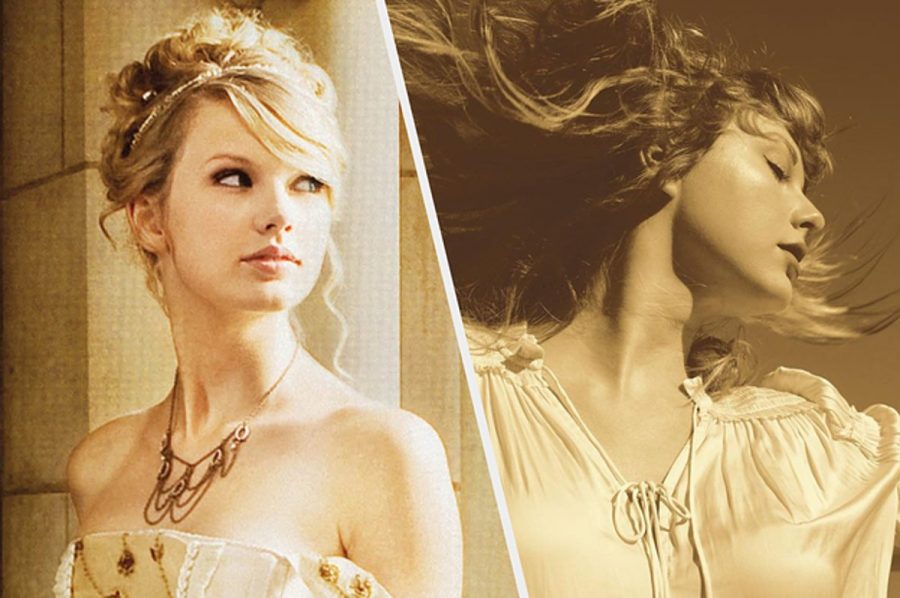 Upon first listening to “Love Story (Taylor’s Version),” it was honestly quite hard for me to notice any major differences between the new version and the 2008 version that I grew up listening to. However, as I kept listening to the new version, it began to take on a whole new meaning. “Love Story” is already a hopeful take on “Romeo and Juliet,” but in the re-record, I found a greater sentiment of happiness in Swift’s vocals. The new version left out the twangy banjo from the 2008 track, and in its place, “Love Story (Taylor’s Version)” develops a more mature perspective, but it is also one that is truly joyful.

When announcing “Fearless (Taylor’s Version),” Swift wrote that “‘Fearless’ was an album full of magic and curiosity, the bliss and devastation of youth. It was the diary of the adventures and explorations of a teenage girl who was learning tiny lessons with every new crack in the facade of the fairytale ending she’d been shown in the movies.” Now, recording the same songs from an adult perspective, “Fearless” not only tells the stories of adolescence but also reaffirms the value of those difficult growing pains. But, to understand the significance of these re-recordings, it is important to understand the history and drama surrounding Swift’s catalog.
The Re-Recordings Explained
In 2005, then 15 years old, Swift signed a 13-year record deal with Big Machine Records, a label run by Scott Borchetta. The record deal included the fact that Big Machine Records would own the rights to Swift’s first six albums — which includes “Taylor Swift” from 2006, “Fearless” from 2008, “Speak Now” from 2010, “Red” from 2012, “1989” from 2014 and “Reputation” from 2017. After this contract expired in 2018, Swift signed a new deal with Republic Records, under Universal Music Group. With this contract, Swift was able to fully own the masters to her new albums — which began with her 2019 album “Lover,” and now includes “folklore” and “evermore” from 2020.

In 2019, Big Machine Records announced that it had been acquired by Scooter Braun and his company, Ithaca Holdings. With this change in ownership, the masters of Swift’s first six albums were then transferred to Braun. With the news of the acquisition, the ownership of Swift’s masters was seemingly ripped out from under her. On her Tumblr blog, Swift wrote, “For years I asked, pleaded for a chance to own my work. Instead I was given an opportunity to sign back up to Big Machine Records and ‘earn’ one album back at a time, one for every new one I turned in… I learned about Scooter Braun’s purchase of my masters as it was announced to the world. All I could think about was the incessant, manipulative bullying I’ve received at his hands for years.”

At the time that Swift’s contract with Big Machine Records expired, Variety estimated that Swift’s catalog composed 80% of their revenue. Later in 2019, Braun sold Swift’s masters, videos and artwork to Shamrock Holdings for $300 million, and instead of continuing to funnel money to these individuals and corporations, Swift wanted to find a way to reclaim ownership of the music that she worked for so long to create. In the music industry, whoever owns the masters is the subsequent owner of all copies of that music — including digital versions on streaming platforms and physical copies on CD or vinyl. The owner of an artist’s masters reserves the right to control all reproductions of a record — which includes airplay or music distribution.

Rather than continue to be subjected to these controls on her music, Swift — rightfully so — wanted to re-record her music in order to create new masters and regain ownership of her music. In 2019, Swift officially announced that she would re-record all of her old songs, including ones that were never originally released, and, finally, in the fall of 2020, she was able to begin the re-recording process.
Reclaiming Independence
In her blog post, Swift wrote that the sale of her masters to Braun was her “worst-case scenario… [Borchetta and Braun knew what they were doing]. Controlling a woman who didn’t want to be associated with them. In perpetuity.”

However, in her announcement of “Fearless (Taylor’s Version),” Swift wrote, “Artists should own their own work for so many reasons, but the most screamingly obvious one is that the artist is the only who really knows that body of work… This process has been more fulfilling and emotional than I could’ve imagined and has made me even more determined to re-record all of my music.”

By re-recording her music, Swift is asserting her own independence, and her battles to regain ownership of her music are just another indication of how exploitative the music industry can be. It should not be this difficult for an artist to have control over their own work. But, her search to honor her old music while fighting for respect and ownership in this contentious field sets an incredibly powerful example.

For fans, the re-records bring a sense of nostalgia as Swift will continue working on releasing the music that has defined her career. More than just the delivery of sentimental albums, Swift’s decision to re-record her past music asserts an important message about defending yourself and protecting your life’s work.

With her re-recorded albums, Swift is clearly fighting for the value of artistic ownership and self-autonomy. By undertaking the feat of re-recording six past albums, Swift affirms that maintaining your agency and having control over your own art is an essential part of creative work that should not be exploited or manipulated. And, as a lifelong fan of Swift, I cannot wait to listen to these re-records so that I can revisit and enjoy the music that defined much of my own adolescence.