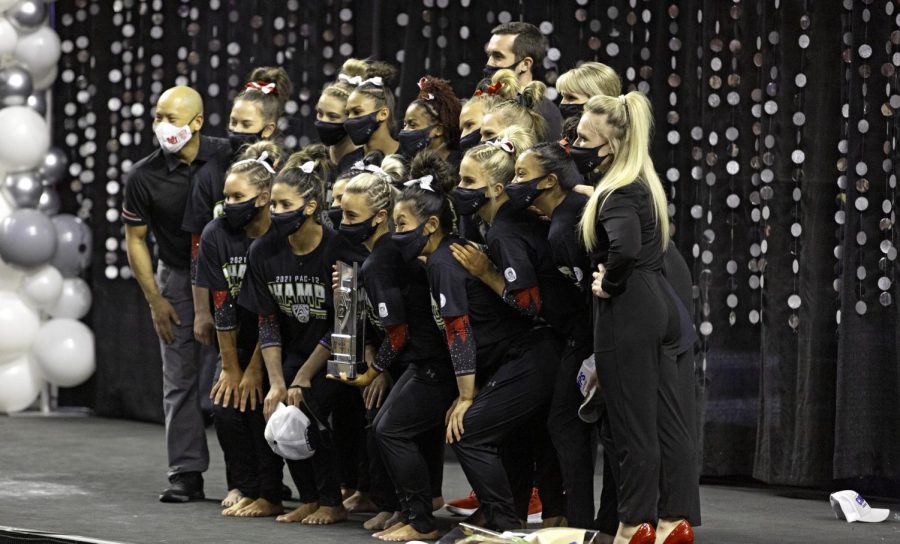 After a rocky start on bars, the No. 6 University of Utah Red Rocks gymnastics team put together two killer rotations to lock in their fourth Pac-12 Championship and become the first-ever out-right champion in the Pac-12 era.

When Abby Paulson suffered a fall on the first bars routine of the night, the Red Rocks needed to count on the rest of the lineup to come through to keep the team in it. The back half of the lineup — that consisted of Emilie LeBlanc, Maile O’Keefe and Cristal Isa — came through: LeBlanc with a 9.875, and O’Keefe and Isa with a pair of 9.950s to give the team some much-needed momentum.

Head coach Tom Farden was seen talking to his team after Paulson’s fall, getting the athletes on the event he coaches back on track.

“He [head coach Tom Farden] was kind of telling us, you know, we need to trust ourselves, slow down and do our routines because if we push, and nothing really happens the way we want it, to so we just have to relax and do what we need to do,” O’Keefe said post-meet.

The momentum only grew from there as the Red Rocks posted a season-high score of 49.675 on the beam with almost every gymnast in the lineup either tying or — in Adrienne Randall’s case — posting a new season-high on the event. Utah ended up dropping Lucy Stanhope’s 9.825 in the monstrous rotation.

According to Farden, Randall and assistant coach Carly Dockendorf had a great week of practice and were on the same wavelength headed into tonight.

“I’ve seen Adrienne when she’s very laser-focused and hyper determined and this was one of those nights, I could just tell all the way through warmups and the way she carried herself, and it resulted in an absolutely brilliant beam routine,” Farden said.

At the end of the second rotation, Utah had started to edge out the rest of the conference with a score of 99.000. However, UCLA was within striking distance of Utah with a 98.950.

But the high scoring didn’t stop there for the Red Rocks, who went onto the floor and posted no score lower than a 9.900. Paulson posted a new career-high on the event with her score of 9.925. The team as a whole also posted a new season-high score on the event, 49.625.

That lead would be vastly important in the final rotation as the Red Rocks competed on the vault, an event that this season has been their Achilles’ heel. Things started out solid for the Red Rocks, with two scores of 9.8s or better, along with mistakes from both UCLA and Cal on their respective events. The Red Rocks looked to be all but set to lock in their championship.

But things began to falter as Stanhope scored a 9.725. Jaedyn Rucker got things back on track with her 9.825 but on the ensuing vault, Alexia Burch fell, scoring a 9.300.

Farden made a last-minute substitution on the anchor spot, pulling Cammy Hall in favor of freshman Alani Sabado, who scored a 9.800 in her first scored vault as a Red Rock. The event score of 49.050 was enough to propel the Red Rocks to victory.

“Each year you coach the teams a little bit different and it’s just really, you know, satisfying for the staff for all of us, for the program to remain at a high level,” Farden said.

O’Keefe and Isa were neck and neck throughout the meet, vying for the all-around title all night. O’Keefe ended up coming out on top with an all-around score of 39.700. Isa came in second with a 39.650. The pair were also tied for first place on the bars and shared the event title on beam with Abby Paulson. O’Keefe also walked away with a share of the event title on the floor.

But the journey isn’t over yet. The Red Rocks will find out on Monday who they will compete against at NCAA Regionals, which are set for the first weekend of April.