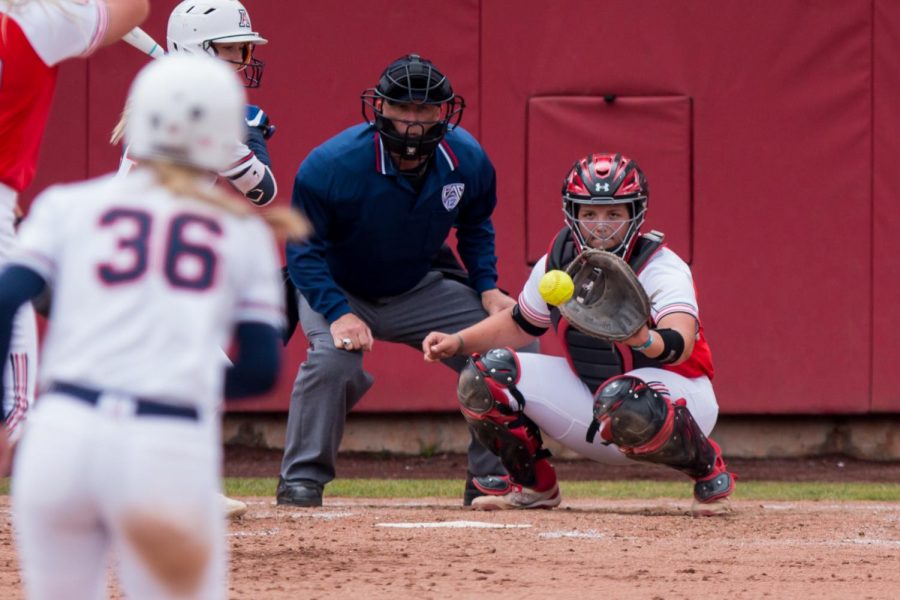 The University of Utah softball team came up empty in an early-season Pac-12 test against the Oregon Ducks — their first in-conference test of the year. With just a quick glance at the box score, one might think the Utes were dominated by one of the best teams in the country. Peeling back the covers and looking a little deeper though, and you’d see that this Utah team is on the verge of something big this year.

On the margins is where the Utes have struggled. If head coach Amy Hogue’s team can clean up some mistakes in the field, collect one or two clutch hits and make the big pitch late in games, they could put themselves on the fast track to being one of the best teams in the best conference in the nation.

Game 1
In a similar script to their previous meeting in late February, the Ducks were able to overcome an early Utah lead with clutch late-game hitting while the Ute offense sputtered. Both teams used small ball strategies throughout the game, but Oregon was able to execute just a little better in their 5-2 win on Friday.

The Utes started quickly on Friday night in Eugene as Haley Denning led off the game with a single to center before stealing second. Denning was followed by Julia Noskin, who drew a walk. After a strikeout, Madi Jacobus opened the scoring with a two-run triple, plating both Denning and Noskin.

Oregon cut the Utah lead in half in the bottom of the first after the first two Duck hitters reached base and advanced to second and third on a passed ball by Utah catcher Katie Faulk. Utah starting pitcher Mariah Lopez was able to limit the damage by retiring the next three Oregon batters in order.

Utah did a good job of getting runners on base in this game, chasing Oregon starter Brooke Yanez in the third inning; but struggled to bring them around after that two-run first. The Utes would strand five runners in the first three innings and seven total for the game.

After a brief third inning rain delay, Lopez worked out of a bases-loaded, one-out jam by striking out Mya Felder and then retired the side on a deep fly ball off the bat of Rachel Cid that had Utah right fielder Jacobus circling before making a diving catch toward the foul line.

In the fifth, Halle Morris relieved Lopez after the first two Duck hitters reached via singles. Alyssa Brito advanced the runners with a sacrifice bunt before Felder knotted the score at two with a sac fly to left.

Oregon relief pitcher Makenna Kliethermes, who replaced Yanez in the third, held the Utes scoreless, allowing only two base hits in her 4.2 innings of work while racking up seven strikeouts.

Oregon would take their first lead of the ballgame on Hanna Delgado’s first career triple to right, which scored two runs to give the Ducks a 4-2 lead. Oregon would tack on an insurance run before Morris could get out of the jam.

Unable to score in the final inning, Utah would fall 5-2. Neither starter factored into the decision, as Morris (2-1) would suffer her first loss of the season and Kliethermes (3-0) got the win.

Game 2
The Utes had a golden opportunity to pick up a win in the first game of a Saturday doubleheader as they led 3-1 and 6-3 at different points. However, Oregon once again showed why they’re ranked No. 4 in the nation with another late-inning comeback and eventual walk-off win.

After a 3-4 night at the plate and two steals on the basepaths on Friday, Denning continued her hot streak by adding three singles and scoring two runs Saturday afternoon. She was joined by Elessa Bonstrom, who went 1-4 with a timely two-run double and scored on a Duck throwing error in the third inning, giving the Utes a 3-1 lead.

Oregon would score a single run in consecutive innings to tie it up at three heading into the fifth inning. Duck starter Samaria Diaz would be pulled for Kliethermes after Utah loaded the bases on three consecutive singles. Kliethermes, the pitching hero for Oregon on Friday night, would surrender a bases-clearing double to Jacobus, extending her hitting streak to 14 games. All three runs were attributed to Diaz.

Utah entered the home half of the fifth with a 6-3 lead, looking to close out a difficult Oregon team. The Ducks would promptly go on to have their biggest inning of the series, scoring three runs on four hits, including a two-run single from Haley Cruse that tied the game at six.

Utah was unable to capitalize on a leadoff double from Halle Morris in the sixth. Instead, Sophie Jacquez popped out to first and Makenna Calderon was thrown out at third after pinch-running for Morris before Alyssa Palacios struck out swinging to end the inning.

Oregon would complete their third consecutive come-from-behind win over the Utes on a seventh-inning walk-off home run off the bat of Cid, her first long ball of the season.

Kliethermes (4-0) would get her second win of the series in relief, throwing 2.2 innings. Lopez (1-4) would take the loss for Utah.

Game 3
After the deflating 7-6 walk-off loss in the first game, there was no need for an Oregon comeback in the nightcap on Saturday. Utah was held scoreless for the first time since April of 2019, a 41-game stretch, falling 3-0.

Making her second consecutive start behind the plate, Elicia Espinosa would notch her third base hit of the day, one of only three Ute hits in game two.

Oregon’s first run came on a Terra McGowan single that scored Vallery Wong in the fourth inning. In the fifth, Felder’s two-run double would cap the scoring, giving the Ducks their 3-0 margin of victory.

Both starting pitchers would finish the game in this one as Morris (2-2) would pick up the loss and Yanez (8-0) overcame a rough start on Friday to throw seven shutout innings and get the win.

Asked about the Utes struggles in late-game situations against Oregon, Utah head coach Hogue said, “We are just one or two big hits or one or two big pitches away from winning any of these games. I’m happy with so many things that we are doing, but when it comes to executing something late in a game to get us the win, we have failed. We get one more shot at them tomorrow, and need to find a way to leave here with a W in that last game.”

Game 4
A short memory is important in sports. Whether moving on from big wins or devastating losses, athletes need to focus on what’s right in front of them to perform their best. In the final game of a four-game series, Utah would need to forget the late game failings earlier in the weekend and bring their A-game to salvage a win on Sunday.

Hitting out of the five-hole, Alyssa Barrera collected her team-leading 19th RBI on a first-inning single that scored Noskin. Oregon struck back with home runs from Cruse and Brito, plating three runs in the inning.

Oregon would not trail again. After a complete-game shutout in game two on Saturday, Duck starter Yanez would again give the Utes fits as she threw her second complete game of the weekend, pitching around five hits and only allowing one earned one all afternoon.

Still trailing 3-1, Utah cut the Oregon lead in half after a throwing error on catcher McGowan allowed Denning to advance to third on a stolen base attempt. Denning then scored on a single from Noskin.

Oregon immediately answered, scoring two runs in their half of the fifth, finishing the scoring at 5-2.

Lopez (1-5) would suffer the loss for Utah after allowing three runs on four hits in only 1.1 innings worked.

Utah will have a quick turnaround before getting back on the field against a non-conference foe, the 11-11 Utah Valley Wolverines. The Tuesday doubleheader gives Utah an opportunity to halt a seven-game losing streak in their first game of the season at Dumke Family Softball Stadium.

The first pitch is scheduled for 1 p.m. Tuesday afternoon. Tickets can be purchased here.