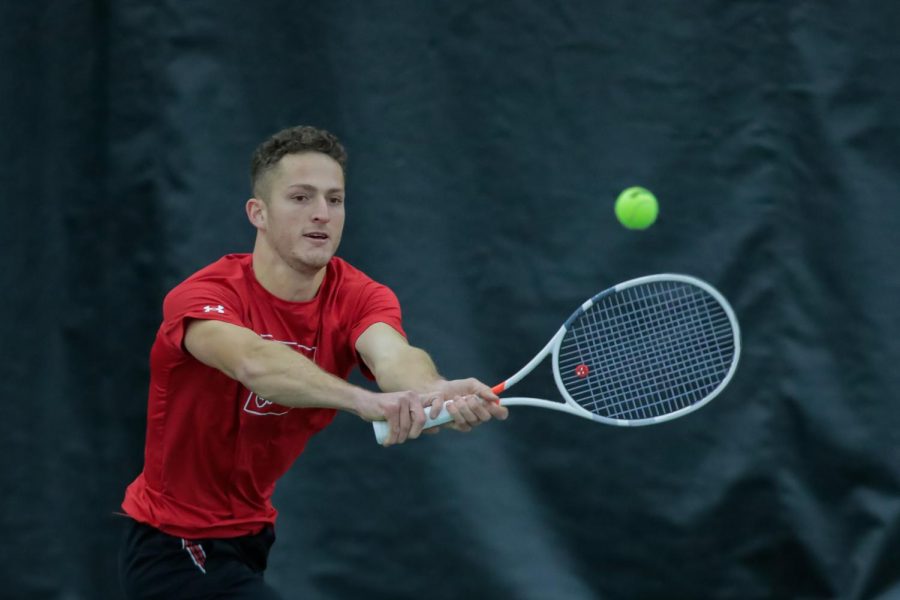 Men’s Tennis
On March 19, the University of Utah men’s tennis team traveled to Washington and faced their familiar Pac-12 foe, The Huskies. In dramatic fashion, the Utes rallied back and won the match 4-3 after being down 3-0.

Unfortunately, the Utes doubles’ teams started off poorly against Washington. The first doubles duo of Geronimo Busleiman and Franco Capalbo lost their match 6-2. The second doubles pairing of Slava Shainyan and Francisco Bastias also fell to the Washington squad, 6-3. Luis Flores and Bruno Krenn did not have the opportunity to finish their match as the doubles point had already been secured by Washington, but things weren’t looking good as they were down 5-2 at the time the match was called off.

Additionally, the singles matches didn’t start much better for the Utes. First off, Shainyan faced off against Clement Chidekh and lost 6-1, 6-4 in straight sets. The next match to finish was the third singles court as Busleiman lost back-to-back games 6-4 to Washington’s Ewen Lumsden.

At this point, the Utes were down 3-0 and one point away from losing the entire contest. On court six, Krenn won a marathon of a match, winning the second and third sets 7-5 to secure the first point for the Utes. Riding the momentum of Krenn’s victory, Capalbo won the Utes a point after clutch rallies in the third set tie-break. Mathias Gavelin followed in the trend of his Utah teammates, winning a point for the Utes in a close final set. Finally, Bastias put the cherry on top of the Utes thrilling comeback victory. Bastias won his match over Washington’s Han-Chih Lin in spectacular fashion, securing key points in the third set tie-break to give Utah a much-needed Pac-12 victory.

While Utah walked away with a well-earned victory in Washington, the second match of the week for the men’s tennis team did not go quite as well as the first. The Utes faced off against Oregon in Eugene and lost 4-0.

To begin, Utah picked up one win out of the three doubles matches. Shainyan and Bastias combined to give the Utes a nice win, but the other teams on the first and third doubles courts were unable to pick up a victory, giving the Ducks the point in the doubles portion of the match. In singles, Shainyan lost his matchup 6-1 and 6-1 in straight sets. Capalbo and Gavelin also fell in their matches, giving Oregon the requisite four points for their victory. In the matches that were left unfinished, Busleiman and Krenn both brought momentum and leads into third sets before their matches were called off.
Women’s Tennis
While the men picked up a victory, the women’s team had a disappointing week of games. They traveled to California to take on UCLA and USC but dropped both of the matches 7-0.

Notably, the Utes put up a valiant effort but it was quickly realized they were heavily outmatched. Some standout performances from these matchups were Emily Dush and Madeline Lamoreaux. They put together a great doubles pairing and almost came out on top over UCLA’s best doubles duo.

Overall, none of Utah’s players could get comfortable in their singles matches, but played with heart and determination, forcing tie breaks and difficult contests. Against USC, Anastasia Goncharova and Lindsay Hung both forced third sets in their singles matches, but couldn’t produce victories.
Up Next
The women’s team will play home matches against Washington State and Washington on April 2 and April 4, respectively. Both of these matches are available to stream on the Utah Utes live streaming service.

The men’s team also has some home matches coming up. They will be hosting California on March 26 and Stanford on March 28. These matches are also available for streaming through the same service.