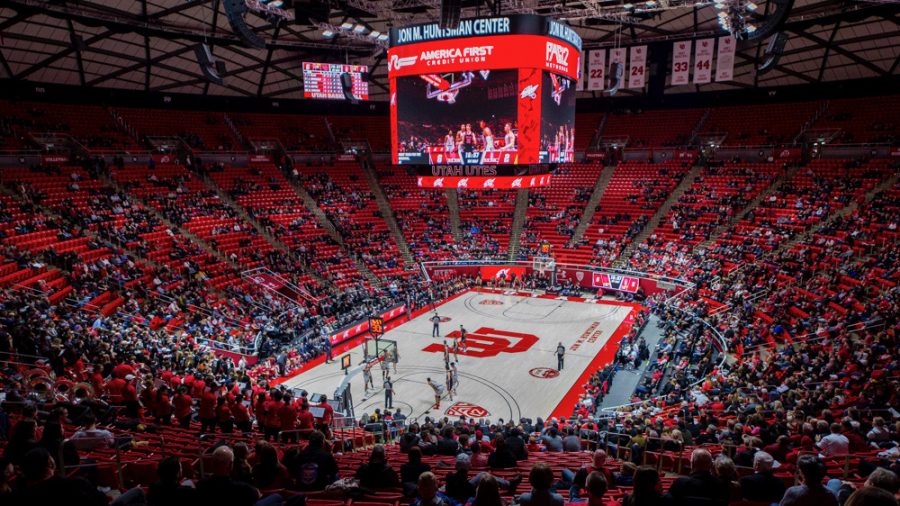 The University of Utah competes against Stanford during an NCAA Basketball game at the Jon M. Huntsman Center in Salt Lake City, Utah on Thursday, Feb. 6, 2020. (Photo by Kiffer Creveling | The Daily Utah Chronicle)

Smith is not new to the state of Utah, as he has been the head coach of Utah State for the last three seasons, taking the Aggies to the NCAA Tournament multiple times.

His record of 74-23 at Utah State culminated in a second-place finish in the Mountain West Conference last year, and the team only dropped nine games in the 2020-21 season.

Harlan stated in the introductory press conference that he had his eye on Smith for a while before pulling the trigger with the hire.

“Craig Smith brings incredible energy and passion, and a proven record of success,” Harlan said in a press release. “I’m thrilled to have him lead our men’s basketball program, and look forward to our student-athletes experiencing his incredible work ethic, dedication to being a teacher of the game, and his ability to relate with his players and help them achieve their greatest potential.”

While his staff is still to be determined, Smith will look to compile a staff that will help restore the history of Utah men’s basketball.

“We haven’t made any final decisions that way,” Smith said. “Certainly, I think the world of Coach [Larry] Krystkowiak and his entire staff, I have relationships with all those guys to different levels and certainly out of respect to them and what they built here, I want to meet with all those guys and have frank discussions, and talk to them, and see if its the right fit. Then of course, our staff at Utah State, what we’ve been able to do there is tremendous and of course they were a huge, huge part of our success. Then, obviously, we have to look at the broad picture and what this position entails and where we have had success in the recruiting trails.”

Smith’s passion for the game as well as his players shone through in the press conference on Saturday, mentioning how he wants to bring Utah back to national prominence.

“My family and I are thrilled to join the University of Utah and the community of Salt Lake City,” Smith said in a press release. “The Utah men’s basketball program has fantastic leadership at the top in Director of Athletics Mark Harlan and his executive team. After visiting with Mark, it became clear that our visions for Utah Basketball were aligned. This program has a rich tradition of excellence in the history of college basketball. Our facilities are state-of-the-art and first-class in every way. Our fan base has tremendous energy, knowledge and passion. We can’t wait to pack the Huntsman Center, feed off the energy of the MUSS and bring a consistent winner back to the U!”

Smith did meet with the team this morning along with watching a film of the current roster to get a feel for the room he is now in charge of. But he did add that he is looking for “gym rats” or guys who would be devastated if basketball was taken away from them to round out his roster.

Once he assembles the best coaching staff and roster, Smith wants to play the best of the best, mentioning he not only wants to keep playing the Utah-BYU game but also playing as many Quad 1 non-conference games as possible at Utah.

“I’ve always believed, to be the best you gotta play the best. Our motto is ‘bring on the competition.’ You know, the last three years, our net ranking was 42 or lower at Utah State and my mentality is, let’s be a part of this program to make it the best possible program you can,” Smith said. “And to do that you’ve gotta play and schedule up. We want to play in marquee events, we want to play marquee teams, and of course, the Pac-12 is one of the marquee conferences in the country and so we are gonna get that on a nightly basis in conference play. But I think it’s incredibly important to play a non-conference schedule and we will be creative with that.”

Utah fans are ready to usher in the Smith era and hopefully start to bring in the hardware the team has been deprived of for the last few years.