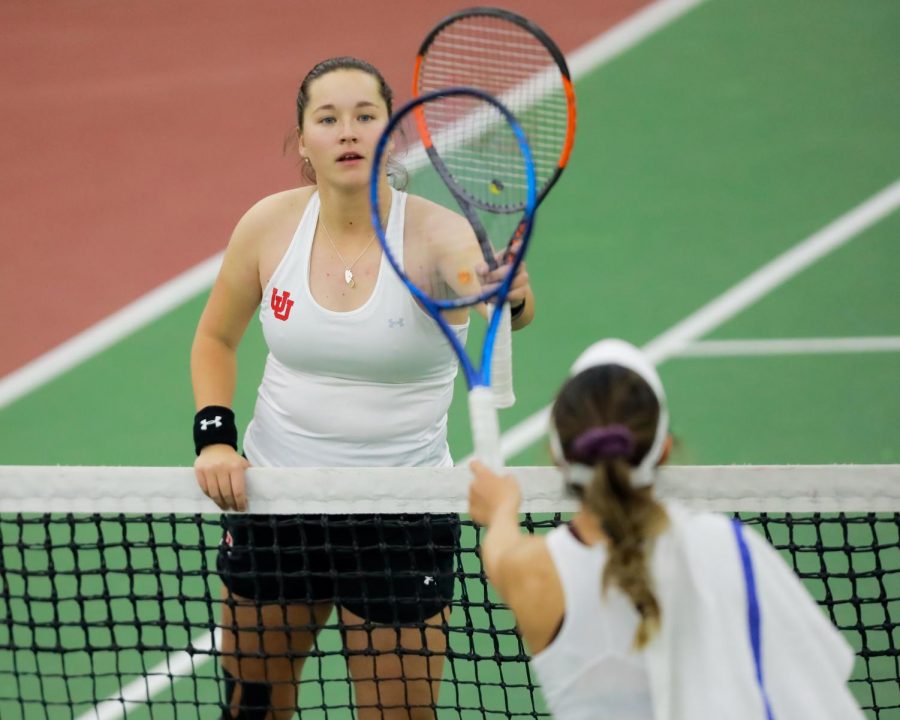 The Utah Women's Tennis player and University of Utah junior Anastasia Goncharova celebrates her win in singles against the New Mexico State University in an NCAA dual Meet at the Jon M. Huntsman Tennis Center on 04 Feb. 2021 (Photo by Abu Asib | The Daily Utah Chronicle)

For their only game this week, the University of Utah women’s tennis team played Dixie State. On Thursday, March 25, the Utes traveled to St. George to face off against their in-state rival. The Utes won 7-0 in dominant fashion and picked up a key out-of-conference win. The men’s team played well in Salt Lake City but could not overcome an early lead from Stanford, eventually losing 5-2.
Women’s Tennis
The women’s team has been dominant against Dixie State in their previous matchups, remaining undefeated against the Trailblazers. To begin, the day started perfectly for the Utes as the doubles pairings all managed to win their matches — giving the Utes a 1-0 lead to open up the match.

The first doubles match to finish was on court three and featured the Utah duo of Lindsay Hung and Madison Tattini. They won their match in dominant fashion, not dropping a single game. It was more of the same on court two, where Jasmine Rich and Madeline Lamoreaux shut out the Dixie State team 6-0 in their matchup. Emily Dush and Anastasia Goncharova completed the doubles segment in devastating fashion, winning their match 6-2.

Court six was the first singles match to finish in the singles portion of the competition. Here, Utah freshman Olivia Mikkelson won her match in straight sets — 6-1 and 6-2, a result that never really felt in question. Hung’s match on court three was the next to finish as she decisively won her match in straight sets as well 6-1, 6-0. Tattini’s matchup was a bit more competitive, but she continued the theme of straight-set victories, winning 6-4, 6-1.

Dush finished up next on court two and also won in straight sets 6-1, 6-2. Goncharova won her match 6-2, 6-3 to push the score up to 6-0. Lamoreaux and Kyra Harames played the final and most competitive match of the day, being the only match to go to a third set. Lamoreaux won the first set 6-4 then dropped the next set 1-6. In a deciding third set, Lamoreux won key points in the clutch to win the game and the set 7-5.
Men’s Tennis
This week, the men’s tennis team played only one match, at home against the Stanford Cardinal. On Sunday, March 28, the Utes suited up to take on this Pac-12 opponent only to eventually fall to the Cardinal, 2-5.

In doubles, the pairings of Fransisco Bastias and Slava Shainyan as well as Chris Heck and Luis Flores fell to their Stanford counterparts. The pairing of Franco Capalbo and Geronimo Busleiman played well, but their match was left unfinished as Stanford had already secured the point.

Capalbo had a standout performance in singles as well, winning his court two match in straight sets 6-3, 6-3. The sophomore Mathias Gavelin also picked up a big win on court six. He dominated and won his match in straight sets 6-2, 6-2. But, unfortunately, the rest of the Utah matchups did not go as well as every other set ended in a loss.
What’s Next
Men’s tennis has a busy week starting with a doubleheader on Tuesday, March 30 against San Diego State and Montana State in Salt Lake City. The team will then travel to Reno to face off against Nevada on April 1 before heading to California to play UC Davis on April 2. The women’s tennis team will stay home to face Washington State and Washington on April 2 and April 4 respectively. All these matches are available to stream on Utah Tennis Streaming on the Utah Athletics website.