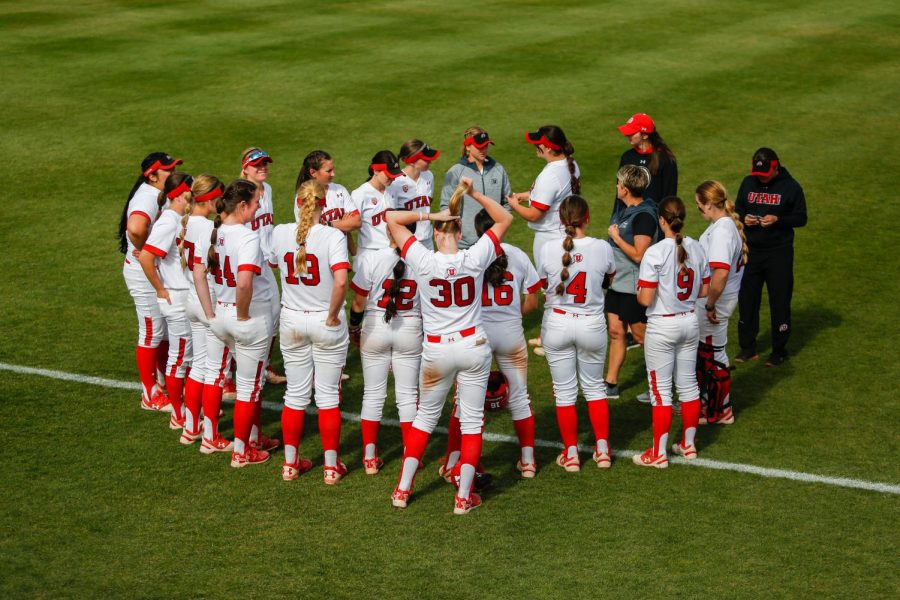 A 9-2 start to the season had the University of Utah softball team riding high. Receiving votes in the preseason Top-25, expectations were sky high for the Utes. One month later, and rather than being on top of a winning wave, the Utes are in the midst of a streak of 11 losses in 13 games; dropping them to 11-13 overall and 0-6 in the Pac-12 after two weekends of conference play.

Utah fell into a slump with three consecutive losses at the hands of some of the Pac-12 elite: UCLA, Oregon and this weekend’s opponent, the Arizona State Sun Devils. Then came an 18-day break for the Utes. Utah was already planning on having one weekend off, but their schedule got pushed back because of COVID-19 protocols, forcing Utah to withdraw from the Dixie State Tournament and a mid-week game against that team down south, BYU.

That extended break didn’t do the Utes any favors entering Pac-12 play against a highly ranked Oregon team last weekend. Utah held leads in three of four games in Eugene, but struggled with runners on base and the pitching faltered late in each game, costing the Utes four more losses.

Utah returned home and faced a quick turnaround with the UVU Wolverines, making the hour drive north to face the Utes in their first home games since May 2019. Or in other words, 688 days. Utah snapped their losing streak in convincing fashion with 10-2 and 2-1 wins over the Wolverines, improving to 11-9 for the season.

That winning feeling was short-lived because a red-hot Stanford Cardinal came rolling into Salt Lake and made quick work of the Utes. Led by Regan Krause and Alana Vawter, the Cardinal would trail only once, for less than half an inning, in a demoralizing four-game sweep of the Utes.

Similar issues have plagued the Utes in their losses. Namely, defensive miscues and inexperience have prevented Utah from converting consistently with runners on base. 15 underclassmen provide a bright future for the Utah softball program in spite of the growing pains they have experienced recently.

After an injury to senior Julia Noskin, freshman Ali Belarde was pressed into extensive work all weekend at shortstop. She joined another freshman, Mariah Lopez, who started both games of the doubleheader on Saturday. Sophomore regulars Haley Denning, Halle Morris, Madi Jacobus, Destiny Quiles and AJ Militello also saw plenty of action against Stanford. Besides the usual underclass players, freshman pitcher Alicia Estrada and sophomore pitcher Mary Beth Feldman each made their first appearance in the Pac-12 competition.

Six errors cost the Utes dearly in their series against Stanford, as they allowed four unearned runs in the series. It could also be argued that there were several mistakes that were not officially scored as an error, but at the very least impacted the confidence of Ute pitchers. The psychological impact of errors in the field on a pitcher’s mindset cannot be understated.

The Utes are on the precipice of big things this season. To reach their goals, it is imperative that the underclassmen become impact players immediately and take advantage of run-scoring opportunities. As one of the youngest teams in the conference, Utah depends on freshman and sophomore talent more than most. Mental errors and learning opportunities are part of the game, and Amy Hogue is the right coach to build this team into a winning outfit.
No. 14 Arizona State Sun Devils
The Arizona State Sun Devils (19-8) come into Salt Lake on a two-game losing streak after dropping the last two games in a series against No. 6 Washington Huskies. The Sun Devils began that series with 5-4 and 6-1 wins before their pitching faltered, leaving them with 14-7 and 11-1 losses.

ASU has used only three pitchers this season but to great effectiveness. Lindsay Lopez (7-3) leads the staff with a 2.65 ERA in 66 innings pitched. Allison Royalty (6-3) sets the tone in the strikeout department, with 74 K’s in 61.2 innings pitched, while limiting batters to a .211 average. Cielo Meza (6-2) could also see a start in the series against Utah, as she has a respectable 4.81 ERA, but has allowed 11 home runs in 39.1 innings.

Offensively, ASU features another deep lineup with eight players batting over .300, led by Maddi Hackbarth’s .416 and Makenna Harper’s .406. The Sun Devils offensive attack presents new challenges for the Utes because of their ability to use the extra-base hit, including 57 home runs. In contrast, last week’s opponent, the Stanford Cardinal, combined for eight homers. Harper leads the team with 12 dingers, but six of her teammates have at least five long balls.

Limited seating is available, and tickets can be purchased here. If you are unable to attend, all three games of this series will be streamed live here.
Keys to the Game
Attack early: Utah fell behind early in each of their games against Stanford last weekend. The Utes must be aggressive in the early innings and in early counts to test the Sun Devils’ pitching staff.

Pass the bat: Utah has stranded 140 runners in 24 games this season. Squandering lead-off base runners multiple times killed the Utes’ hopes of comebacks last weekend. They must take advantage of base runners by using the running game and contact hitting to put runs on the board.

Limit base runners: Not only does ASU lead the Pac-12 in home runs (57) or thirteen more than Washington, they have also stolen 33 bases, good for fourth in the conference. Utah pitchers (21) have allowed the third-most home runs in the Pac-12. They must limit ASU baserunners wreaking havoc on the bases. Solo home runs won’t kill you, two- and three-run homers will.
From the Clubhouse
Utah super senior Alyssa Barrera will be playing in her 200th career game when she takes the field Thursday afternoon. Barrera currently has 220 career base hits. She needs 25 hits to crack the Utah top-5 all-time list, and 44 to break Hannah Flippen’s career 263 mark.