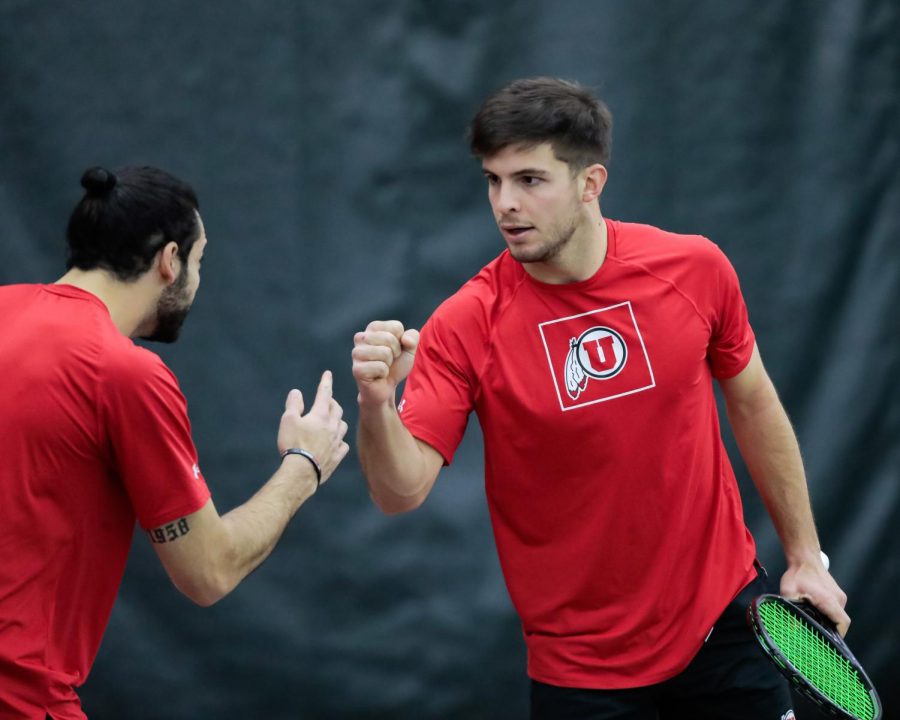 The University of Utah men’s tennis put on a clinic this week, winning all four of their matches in dominant fashion, while the women’s team dropped matches.
Men’s Tennis
The dazzling week opened on Tuesday, March 30 with a doubleheader against San Diego State and Montana State. The day opened with a 5-2 win over SDSU.

The Utes fought through the exhaustion of the doubleheader and came out on top against Montana as well, winning 6-1.

The doubles section of the match went extremely well for the Utes. Bastias and Slava Shainyan picked up the deciding point in the doubles section and moved the match along to singles extremely fast. The Utes players had to fight through a couple of tie breaks and third sets but played almost spotlessly. When factoring in the exhaustion of the doubleheader, the Utes put on one of their best performances of the season against Montana State.

On Friday, April 2, The Utes continued their excellent week as they traveled to Reno to face off against Nevada. The match was closely contested but the Utes won 4-3.

The Utes benefited from a bit of luck in the doubles section. The third doubles team for Nevada failed to materialize so the Utes already had one point in the best of three. Busleiman and Gavelin made quick work of this last point and sent the match into the singles section in style, winning 6-1.

Nevada’s failure to show gave the Utes another key point, as Luis Flores won his match by default. Busleiman and Capalbo both won their matches in straight sets to win the 4 points needed for victory.

The last match of the week saw the Utes on the road again. This time they went head to head with UC Davis, winning 4-0. After a quick victory in the doubles section, even more efficient wins from Bastias, Shainyan and Gavelin brought the match to a close, ending a terrific week for the Utah Utes men’s tennis team.
Women’s Tennis
The Utah women’s tennis team did not have quite as successful a week as the men’s team. The Utes lost both of their home matches this week and will look to get back on track on the road in next week’s slate of matches.

On Friday, April 2 the Utes played Washington State at the Eccles Tennis Center. The Utes lost a heartbreaker, 4-3. The day started off well as the Utes won the doubles portion of the match thanks to a great performance by Emily Dush and Anastasia Goncharova. The Utes couldn’t carry the momentum into singles and lost crucial matches on courts 1, 2, 4 and 5. Utes player Lindsay Hung put on a show in her match, winning a decisive third set 6-0.

On Sunday, April 4 the Utes played Washington at home and lost 4-0. The Utes couldn’t get anything going against a tough Washington team. The match finished at 4-0 and quite a few games were left unfinished. Anya Lamoreaux was in the midst of a third set and looked to have a great shot at picking up a win.
Up Next
The men’s tennis team will play twice next week. First, they face off against Arizona State on Friday, April 9. Two days later they will play Arizona, both of these games will be played in the Eccles Tennis Center. The women’s team also faces off against both Arizona teams. They play Arizona State on Friday, and Arizona on Saturday. These matchups are both on the road. All of these games are available from streaming via Utah Tennis Streaming on UtahUtes.com.