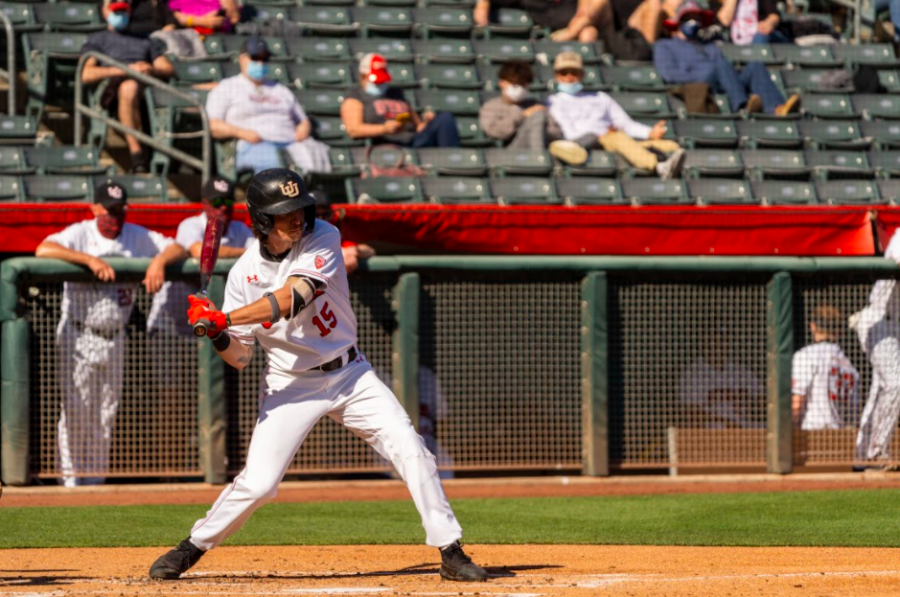 The University of Utah baseball team stayed at home this weekend to host Washington State at Smith’s Ballpark for a three-game conference series. Utah came into the series after a massive 16-3 midweek win over Dixie State on April 6. In the series with Wazzu, Utah had consistent at-bats, totaling 28 hits for 20 runs. The Utes won game two but came up short in the bookend games after WSU built early leads that put them just out of reach for Utah.

In the opener, WSU went up early with three unanswered runs in the third and fourth innings, adding another two in the fifth to go up 8-0. Utah would get bats rolling in the fifth with a single from Tyler Thompson and a double from Chase Fernlund to score two. Christopher Rowan Jr. got the Utes going in the sixth with a single, and Shea Kramer capped off the inning with a double and two more RBIs.

One more run in the seventh and two in the ninth inning was not enough to spare Utah a loss, as WSU kept the pressure on, adding four runs collectively in the sixth and seventh to end the game 12-7.

Justin Kelly pitched four innings starting on the mound, giving up eight hits for eight runs and racking up three walks and three strikeouts. Josh Giffins came in for three innings, allowing five hits for four runs, three earned. Ben Kibbe made his fourth appearance of the season, coming in to close for Utah. Kibbe pitched for two innings, allowing two hits, no additional runs and tallied a strikeout — his first since facing Cal State Fullerton in February.

Utah was on the board first in the second game with Jayden Kiernan getting on the bags on a WSU throwing error. Rowan Jr. singled and reached second on another error that also scored Kiernan. Rykker Tom — who had a big day at the plate, going 3-4 with two runs and two RBIs — singled to left field to score Rowan Jr.

The Utes held their 2-0 lead through the third inning with Kyle Robeniol at the mound going three-up three-down until the fourth. In four innings pitched, Robeniol allowed seven hits and runs with six of each in the fourth, no walks and five struck-out Wazzu batters. In the fourth, WSU batters began to break Robeniol down with a lead-off single. With one out, WSU then had five consecutive batters get hits, with a double, a single and a home run to cap it off and go up 6-2.

Utah stuck with Robeniol in the top of the fifth but after a wild third strike pitch and a single from WSU put two runners on, they turned to the bullpen to bring in Matt Sox who, in three innings, pitched allowed only one hit and one walk for no runs and chalked up four Ks — hands down Utah’s best performance on the rubber for the weekend.

While Sox went to work from the mound, the rest of the Utes did damage from the plate. With two outs and one runner on, Kiernan and Kai Roberts had back-to-back singles that brought one across and ignited the Utah dugout. Rowan Jr. walked to load the bases followed by back-to-back singles from Tom and Jaylon McLaughlin to tie up the score 7-7. WSU went to the bullpen to try and shut down the rally, but Utah would not be deterred. Kramer singled to center to add two more RBIs and would find his way across the plate on a single from sophomore Gabe Singer. Brayson Hurdsman was called in for mound duty in the eighth and held Wazzu to a hit and racked up his third save. Sox was credited with the win.

In the third game, Utah struggled to convert hits into runs, bringing in one in the fourth, eighth and ninth off of nine hits on the day. David Watson got the start on the mound and allowed five hits for four runs, two earned. Watson struck out four and had two of Utah’s five batters hit-by-pitches, a team-high for the season. WSU steadily built the lead to go up 5-1 in the eighth. Singles from Kiernan and Roberts got runners on. Kiernan would be the only runner to make it across home plate in the inning to shorten the gap at 5-2. An error scored Kramer in the ninth and the game ended 5-3, Washington State.

Utah moves to 4-8 in conference play, 8-17 overall. The Utes are set to play BYU for the third time this season in a midweek game in Provo on Tuesday, April 13, followed by a road trip to Los Angeles to take on UCLA in a weekend three-game series. UCLA is 6-6 in Pac-12 play and 17-11 overall, most recently going 1-2 in a series at Stanford.