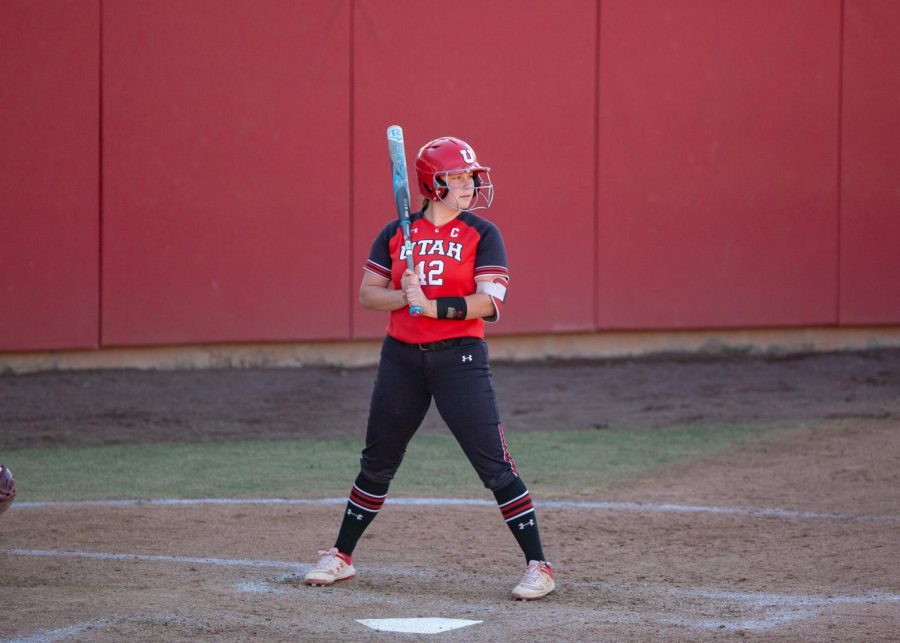 Senior infielder, Alyssa Palacios (#42), during the Ute's game against the ASU Sun Devils on Apr 2, 2021 at the Dumke Family Softball Stadium on campus. (Photo by Jack Gambassi | The Daily Utah Chronicle)

The University of Utah softball (16-18, 2-10) team took their talents to Berkeley for a four-game series against the California Golden Bears (16-12, 3-6)  that began Friday afternoon.

The Utes were coming off of three consecutive victories in St. George; they won 7-4 and 11-3 against the Dixie State Trailblazers, and they had a 7-5 win over the Southern Utah Thunderbirds. For their part, Cal is coming off of four straight losses to No. 6 ranked Washington before a midweek 6-1 win against Saint Mary’s.
Friday
A pitchers’ duel developed at Levine-Fricke Field between starters Mariah Lopez for the Utes and Chloe Romero for the Golden Bears. Each opened the ballgame with four scoreless innings before either team would break into the scoring column.

Alyssa Palacios struck first with a leadoff home run, her second of the season, to give the Utes a 1-0 lead. Utah would tack on an insurance run later in the inning when Halle Morris singled to left, bringing home Haley Denning from second base. With runners on second and third, AJ Militello struck out to end the Utah threat, stranding both runners in scoring position.

This would prove costly in the home half of the fifth inning, as Cal got a 1-out solo home run from Makena Smith that cut Utah’s lead in half, 2-1. The Golden Bears then capitalized on a 2-out walk to Mikayla Coelho that was immediately followed by an Alexis Bishop two-run homer that would prove to be the game-winner, putting Cal in front, 3-2.

Lopez (4-9) finished with the second complete game of her Utah career in the loss. Across six innings, Lopez struck out three, allowing six hits and three walks. Haylei Archer (7-3) got the win for Cal after coming on in relief of Romero during the fifth inning.
Saturday
Game 1
Another low-scoring battle broke out early Saturday afternoon. Denning continued her hot streak when she led off the game with a single. Denning then stole second and advanced to third on a throwing error. Ellessa Bonstrom brought Denning home on a single back up the middle.

Cal scored runs in the second and third innings to take a 2-1 lead while the Utes waited for their bats to pick up the pace. That would happen in the fourth when Destiny Quiles doubled home Jordyn Gasper to even the score at 2-2.

Bonstrom picked up her second RBI of the day, launching her ninth home run of the season, which was followed by a Palacios homer, extending the Utes’ advantage to 4-2.

Cal got a run back in the sixth but Morris (4-3) finished the game and picked up the win in relief of starter Mary Beth Feldman. Romero (6-2) took the loss for Cal.
Game 2
In the non-conference third game of the series, Utah pitching struggled to hold off the Golden Bears in a 6-4 loss.

Cal jumped out to a quick 2-0 lead when Sona Halajian hit a two-run home run. They increased the lead to 3-0 in the second when Smith singled home Tatum Anzaldo.

Utah tied the ball game in the fourth inning when Bonstrom scored on an error by Cal shortstop Anzaldo. Morris scored on a Katie Faulk groundout to short and then Palacios got an RBI when she singled up the middle, scoring Gasper.

In the bottom half of the fourth, Cal got all three runs back when Smith hit her second home run of the series, this time a three-run shot to left, giving Cal a 6-3 lead.

Alyssa Barrera got her team-leading 30th RBI of the year on a fifth-inning groundout that scored Denning. Utah would get no closer though, as they would fall 6-4 in the nightcap.

Archer (8-3) got the win and Sydney Sandez (7-4) took the loss for Utah.
Sunday
The Utes closed out the weekend in a disappointing fashion as they dropped a back and forth ball game 6-4 to finish the series. Utah had opportunities to win every game this weekend but struggled to complete the winning puzzle when it really mattered.

The Utes led 3-0 heading into the bottom of the fourth and were sitting pretty thanks to an RBI walk drawn by Palacios in the second, a Bonstrom double that scored Julia Noskin, and a Morris single to bring around Bonstrom.

Cal cut the lead to 3-2 when Smith continued her torrid weekend with a two-run homer. Cal then took a 4-3 lead in the fourth inning thanks to a Sophie Medellin double that plated Sabrina Nunez in addition to a run-scoring single off the bat of Morgan Zomara.

Bonstrom tied matters up with her 10th home run of the season in the fifth before Utah surrendered the lead and the game on two sixth-inning Cal runs. Romero (7-2) got the win while Morris (4-4) took the loss.

Asked about the Utes’ play this weekend, head coach Amy Hogue talked about missed chances. “We have to be more disciplined in the fundamentals of this game to win these close ones. So many times we have been a bit late in the game because we fail to do what we know the game is asking us to do. We didn’t execute well today. Small things became big things and we lost a lead and eventually the game because of it.”
On deck
Utah returns home to face the Weber State Wildcats at Dumke Family Softball Stadium on Wednesday, April 14. The first pitch is scheduled for 4 p.m. The game will be streamed here and tickets can be purchased here.