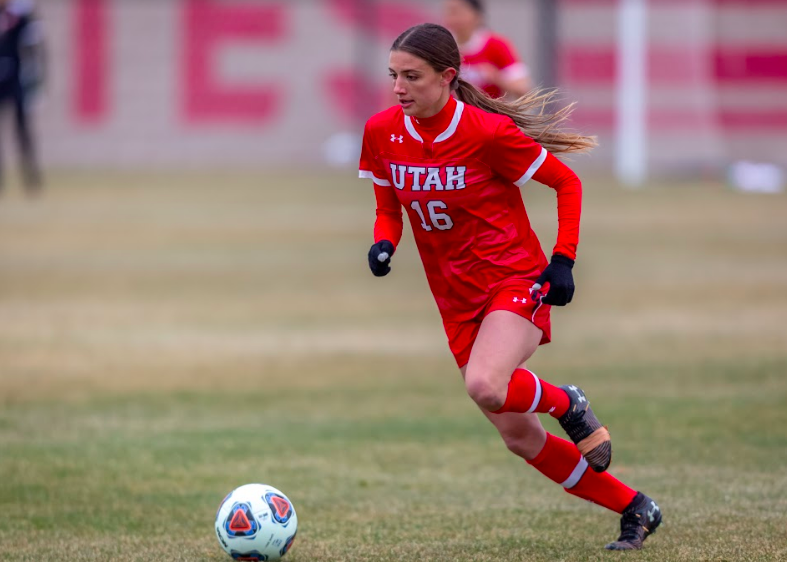 University of Utah's Courtney Talbot (So. midfielder, #16) during the game against the Washington Huskies on March 26, 2021 at ute field on campus. (Photo by Jack Gambassi | The Daily Utah Chronicle)

On a beautiful Sunday afternoon, the University of Utah women’s soccer team welcomed the Arizona Wildcats to Ute Field for their final home match of the season. Utah dominated the first half of play, scoring two goals which they then protected through the end of the game, beating Arizona 2-1 on senior day.
First Half
Throughout the first few minutes of play, the possession was fairly equal as both teams battled to control the midfield but neither squad was able to piece together any sort of scoring opportunity.

But finally, in the ninth minute, Utah was awarded a corner that went long and fell to the feet of Courtney Talbot. Talbot then placed a beautiful cross back into the middle but couldn’t find the head or foot of any teammate and the opportunity ended without a shot on goal.

A few minutes later, Talbot placed a gorgeous through-ball to Taliana Kaufusi, who ripped it on net inside the 18-yard box. While the shot had some heat on it, the ball sailed right into the arms of Arizona goalkeeper Hope Hisey, who stopped the first real chance of the day.

The Utes continued to apply all kinds of pressure on the next attack, and Kaylee Coatney had a crack from the top of the 18-yard box but it was just wide of the net. Despite the miss, Utah was dominating possession and opportunities.

In the 20th minute, another Ute counter-attack resulted in a breakaway for Kaufusi. However, Hisey was able to turn the shot away as Kaufusi took one too many touches and only managed to put a toe-poke on net.

After multiple scoring chances, the Utes finally broke through in the 25th minute as Talbot dribbled her way up the left side and put a shot on the near post. When the ball deflected off of Hisey, it found the back of the net and put the Utes up 1-0 over the Wildcats. Just seconds after the ensuing kickoff, a long ball was sent to Kaufusi who found herself on another breakaway; this time, she buried it into the bottom left corner, and Hisey had no chance to stop it. The 25th minute was very productive, and the Utes were up 2-0.

Over the course of the final 20 minutes, the game slowed down as neither team was able to create any real opportunities. Neither goalie was strained by any shot and the half finished with Utah leading 2-0.
Second Half
Arizona came out strong from halftime as they maintained possession for the first few minutes of play. On one particular possession, Arizona forward Jill Aguilera took a deep shot from roughly 40 yards out. The ball hung in the air for quite some time and then suddenly dropped in on goalkeeper SJ Edwards — the ball deflected off her hands and fell into the net. With the goal, the Wildcats cut the lead in half but still trailed 2-1.

Over the next 20 minutes, Utah really struggled to keep it out of their half as Arizona turned up the physicality and were really pressing the Utes. Multiple opportunities resulted in shots on goal, but it wasn’t anything that Edwards couldn’t handle as she turned them all away.

In the final 20 minutes of play, Utah finally broke out of their own half and started attacking the right side. Multiple crosses were sent into the box but no real opportunities came as the goalkeeper swallowed them up or they went long and out of play.

In the 78th minute, the Wildcats nearly tied the game as a shot came in from roughly 30 yards out, deflecting off the hand of Edwards and off the crossbar. The ball dropped right in front of the goal line but Edwards quickly swallowed it up, slowing things down and denying Arizona of any chance for a rebound.

Soon after, in the 84th minute, the Utes found themselves on a counter-attack as Arizona was committing most of their players forward. Kaufusi found midfielder Eden Jacobsen on the left side of the box and put a shot on net, which was deflected wide by Hisey.

Utah’s strategy over the final five minutes was simply to waste time as they continually dribbled to the corners and protected the ball, watching the clock wind down to zero as they successfully protected their lead, defeating Arizona 2-1.
Word From Coach
Overall, head coach Rich Manning was very pleased with the result of the game as the team dominated the first half and did a great job of protecting their two-goal lead in the second despite Arizona’s physicality.

“I’m super proud of the team, you know, Arizona is a really good opponent and it’s a great win, great win to beat them. It was a tale of two halves really. I think it was a little windier than maybe it appeared, and we were going with the wind, took advantage of it in the first half, and we played really good soccer. Then when we were going against the wind, Arizona was able to get some momentum, obviously they got a goal, and we spent most of the half trying to get out. So the second half was a struggle but we were able to get the win and I am super proud of the team,” Manning said.
A Look Ahead
With the victory, the Utes improve to 4-8-3 overall and 3-5-2 in the conference. Utah will finish out the season next week at Colorado on April 16 with a kickoff of 3 p.m. MST. The game can be viewed on the Pac-12 Network.