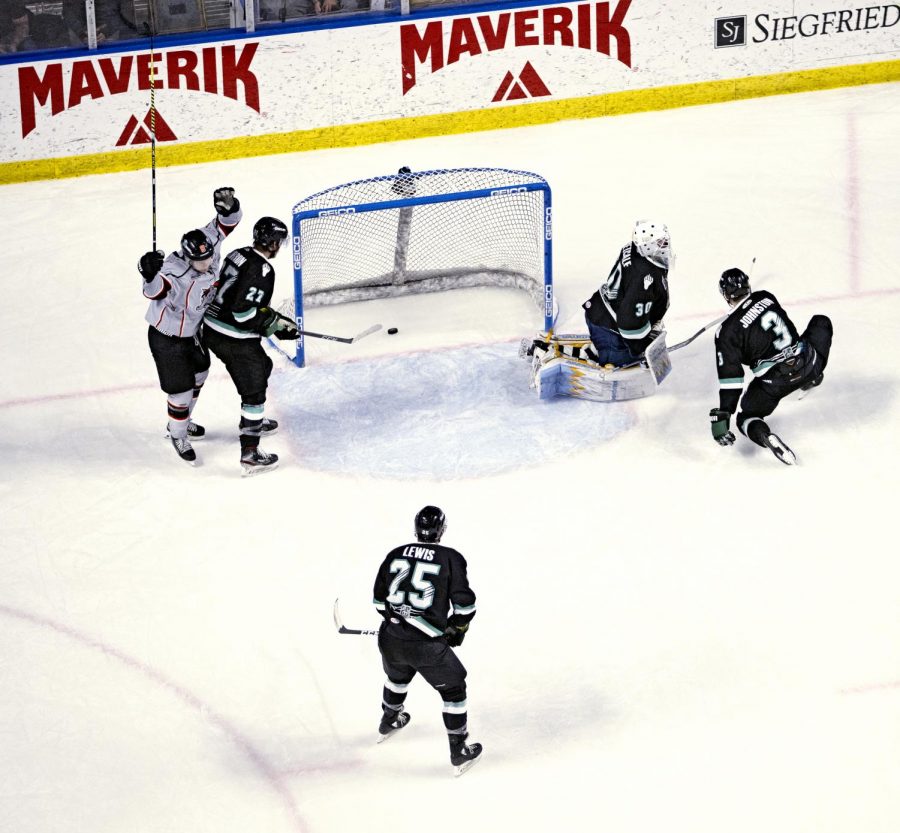 Utah Grizzlies in a game versus the Kansas City Mavericks, Wednesday, Apr. 14, 2021. (Photo by Kevin Cody | The Daily Utah Chronicle)

With seven seconds left on the clock and the goalie pulled, Grizzlies forward Matthew Boucher scored the goal that would tie the game 4-4 and send the Utah Grizzlies to over time with the Kansas City Mavericks.

A bounce off the boards set up a wide open Boucher from the right face off dot. The goal came minutes after Mavericks forward Bryan Lemos put the Mavericks ahead 4-3.

After the Grizzlies missed a wide open net in OT on an odd man rush, Brodie Reid fired the puck into the net and the Mavericks won the hockey game 5-4.

In a game that had its fair share of lead changes, the Grizzlies came up just short. Here is how we got to this point from the first and second periods.
First Period
Grizzlies jumped out to an early 1-0 lead as Charlie Gerard got a great cross ice feed from Cedric Pare and put the puck into the top corner on the short side. The Grizzlies held the puck for a majority of the first period.

The break out for the Grizzlies worked very well as leading goal scorer Boucher had great rushes down the right side of the ice.

The Grizzlies had one power-play on the period but came up empty.

The Mavericks scored a goal late in the period as Willie Corrin’s shot from the point took a bounce in front of net, crossing the goal line.

Utah outshot the Mavericks 14-6 in the first period.
Second Period
Three minutes into the second period, Cole Fraser of the Grizzlies casually strolled past the blue line and sniped the puck top shelf with a wicked wrist shot from the point — no screen, no deflections.

It was quite possibly the best shot of the night for either team.

From there on out the period was spent on the power-play for both squads. The teams combined for 12 minutes of power-play time within the period.

Adam Brady scored a power-play goal to tie the game up at 2.

The Grizzlies would respond though and Gerard would score his second of the night on a cross ice feed at the left dot on the man advantage.

The game was back and forth throughout the second period. Both teams surrendered two breakaways but both were quenched by goaltending. Grizzlies goalie Peyton Jones made two great glove saves in the period.
Atmosphere Check
The game was an interesting study of what live sports look like after a pandemic. Take entrance to the stadium, gone are the days of taking your purse through security — unless it’s a diaper bag, bags are entirely prohibited from the Maverick Center.

Going through the turnstiles, patrons are asked to keep on masks and a temperature scan is required. This is the new normal for live sporting events in America.

We are now more aware than ever of the type of events these can become — super spreaders — and teams like the Grizzlies are doing their best to keep things as safe as possible. They are succeeding.

What got lost in the midst of the pandemic was how therapeutic a live sporting event can be. There truly is no more unique experience than seeing a crowd of strangers dance to the YMCA song in the middle of a hockey intermission.

Overall, despite the loss Grizzlies fans could be seen having a great night out as a bit of normalcy returns to the lives of the people of Salt Lake City.